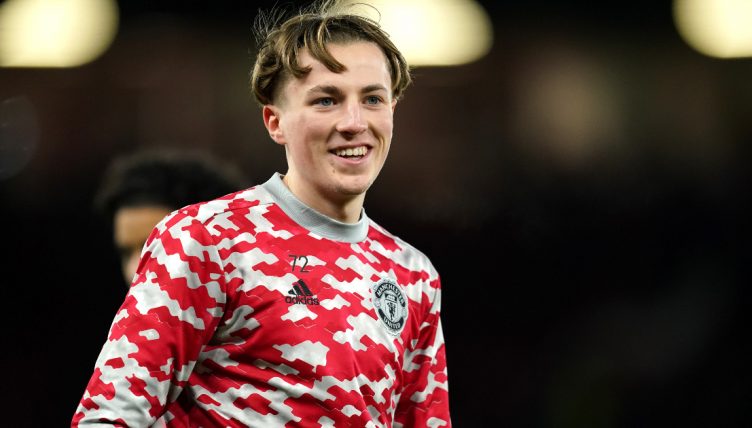 While Robbie Savage never made a first-team appearance for Manchester United, his son Charlie has now made his debut for the club.

The youngster came on as a late substitute Juan Mata in their Champions League group stage game against Young Boys, while his dad was in the commentary box.

But he should not be viewed simply as ‘the son of Robbie Savage’, as he is a talented prospect who has worked his way through the United academy off his own back to make his debut in Europe’s elite competition.

Here’s how his career has looked leading up to this moment.

Born in Leicester in 2003, Savage joined the United academy when he was just four years old. He worked his way through the ranks and made his debut for United’s Under-18s in January 2020, playing 45 minutes against Blackburn in a 1-0 win.

The 18-year-old then got three goals and seven assists in the Under-18 Premier League in 2020-21, helping the Reds as they narrowly miss out on the northern title to neighbours Manchester City.

His impressive performances led to him signing his first professional contract in April 2021 and also moving up to United’s Under-23s. He’s since made 12 appearances in Premier League 2, registering two assists.

Savage also followed in his father’s footsteps by opting to play for Wales rather than England and has made five appearances for the Under-19s side, scoring once.

Although he is a central midfielder like his father, that is as far as the comparisons go. Robbie Savage was a player renowned for his aggressive style and affection for a yellow card.

Charlie meanwhile, is a more technical midfielder, strong both going forward and defensively. At 6ft tall, he certainly possesses the physique to adapt to a midfield role at a higher level, whilst also being technically sound.

A similar player in the United first team in this regard would be Nemanja Matic, and he also possesses a powerful left foot like the Serbian.

Proud of my boy , keeps going , keeps working hard , keeps listening to his coaches , he's starting to get his rewards 💙⚽️ better finisher than his dad pic.twitter.com/JZmQxzpfJc

– “I’m starting to tear up actually, because what the boy has achieved. Charlie Savage has achieved so much in his young life,” Savage senior told BT Sport ahead of the Young Boys match.

“He’s never been top of his group, he’s always had to meet targets, every two years when he was on the borderline, was he going to get kept on? But his application, his work ethic, his desire, he’s humble – that has got him to where he’s got. At times I think it has been harder for him.

“When I’m stood on the sidelines people automatically think Charlie is going to be like his dad. He’s not like me, he’s his own player. I am absolutely delighted.

“He’s a great kid and he’ll do everything. He’s a great player and has a wonderful left foot. He can run and I think he’s the second fittest at the club. Take it all in because he’s one very lucky boy but a boy who’s worked incredibly hard.”

– “I’ve got to say Charlie has a great attitude,” Wales Under-18 boss Rob Edwards said in March 2021. “His presence in our camp is very professional. We set the standards of an elite environment and Charlie has come in and been a great character.

“He played very well against England. The players wouldn’t be here if we didn’t think they had potential.”

– “The main inspiration for me is Scott [McTominay] — he’s the best with us,” Savage told The Sun. “He comes over to talk to us. He had it difficult in the youth team.”

“He didn’t play many matches but he just kept going and he proved it’s not always the standout players who make the first team.”

“Sometimes it’s the players who might have had a back seat but they keep pushing and pushing. Scott, Marcus Rashford and also Brandon Williams all inspire us to improve and move forward.”

– “My dad doesn’t really say too much to me,” Charlie said. “He leaves that to the coaches who know better! He’s there if I need him but he always stresses to me how big a thing it is to play for your country and that I should be proud of what I’ve achieved so far.

“We are different. He was tenacious, whereas I’m more of a ball player. I think I’m a better finisher than him too! He won’t like me saying that — but if I can have half the career he had, then I’ll be very happy.”

– “Delighted to have made my first-team debut for Manchester United in the Champions League,” Savage tweeted after playing against Young Boys. “I would like to thank all the academy staff for their support over the last 14 years and the manager for putting his trust in me tonight.”

"Coming on for Man Utd, Charlie Savage for Juan Mata…"

"Wow, I never believed I'd say those words, what a proud day!"

A lovely moment as @RobbieSavage8 introduces his son for his Man Utd debut ❤️#UCL pic.twitter.com/4NLKC4BTgv