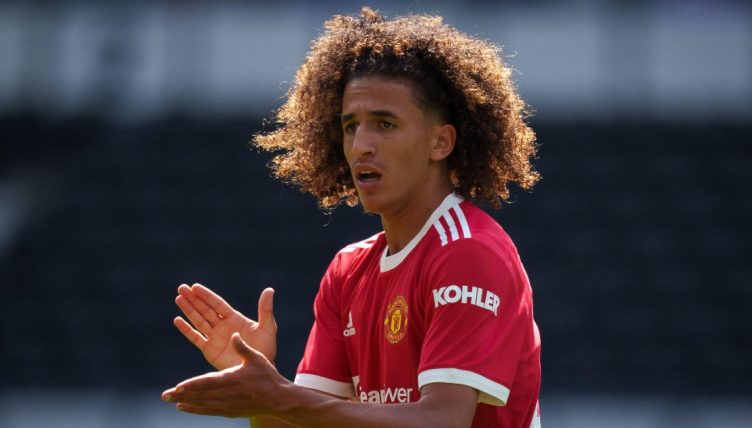 Manchester United’s Hannibal Mejbri is chief amongst the Premier League side’s abundance of youthful talent. Just 19 years old, Mejbri is on the verge of forcing his way into the United first team.

He made a Premier League debut against Wolves on the last day of the 2020-21 campaign and a second league appearance against Liverpool at Anfield in April.

But could he make that step up permanent and get more regular chances? With United’s lack of quality and desire in the first team now glaringly obvious, Mejbri may well be seen as the injection of youthful enthusiasm the squad needs.

There no denying the Tunisian international is one of Europe’s most exciting young talents, so here’s the lowdown on the United prospect.

Born in January 2003, Mejbri started his career at Paris FC and AC Boulogne-Billancourt before moving to Monaco in 2017.

United fought off competition from Liverpool, Barcelona, and Arsenal to secure his signature in 2019, with the Red Devils forking out an initial £4.2million fee that could rise to £8.4million.

That may well end up looking like a bargain if it isn’t one already. The 19-year-old has impressed hugely for the youth ranks, moving from the Under-18s to the Under-23s when he was just 17, and he’s now a permanent fixture in first-team training.

His involvement with the senior squad has affected how many games he’s played at youth level, but in the 2020-2021 season he notched up four goals and eight assists in 20 Premier League 2 games.

Such is his ability, he’s already a full senior international with Tunisia. French-born, he played for the French national team at a youth level but opted to switch allegiances to Tunisia, with whom he went to the 2022 African Cup of Nations. He now has 12 caps for his country.

At the end of the last campaign, he finally made his first senior appearance at club level, coming off the bench to replace Juan Mata in a symbolic ‘changing of the guard’ moment during United’s last game of the season against Wolves.

Oh, he’s also got a personality. He was taunted by Leeds United fans during an FA Youth Cup tie at Old Trafford in 2020, the Leeds fans singing that “Sideshow Bob is f*cking sh*t,” in reference to his hair.

But he took it well and had the last laugh when United beat their rivals 1-0.

Mejbri is a creative midfielder and has mainly featured in the No.10 position for United but is able to play anywhere across the midfield three and like many young attacking midfielders will likely get his first chances in the first team out wide.

When in his preferred midfield, he tends to drift in and out of both wide and central positions, occupying the half-spaces in a way a classic ‘Mezzala’ might be expected to.

A keen dribbler, the Tunisian likes to carry the ball forward himself. That, coupled with his fantastic dribbling skills, means he is routinely fouled several times a game.

The youngster has already drawn comparisons with Paul Pogba due to his technical skills, excellent vision, versatility in midfield, and his confidence on the ball. With Pogba surely leaving United, Mejbri has been seen by many as a long-term successor to the Frenchman in the squad.

– “It is an honour,” Mejbri told Le Parisien after joining United.

“Manchester United has a great history and is also known for its youth training. It will allow me to progress to try to play a day with the greatest.

“I watched a lot of videos from the past. Big names have worn the jersey of Manchester United, it’s an honour to pass after them.

“If I can make it to the first team in two years, it would be good. After that, everything will depend on me.”

“That meant something crazy. But when I went to the national team with Tunisia and everyone was asking about it, and saying: “You play for United!”, you realise just how big it is.

“We all know the story of United bringing young players into the first team.”

– “To be honest with you, I’ll give my absolute best wherever I’m played out on the pitch, whether that be at No.8 or No.6 or No.10 or even on the wing,” he said in January 2022 to the Manchester United website.

“I just need to study each of them to make sure I tactically understand them, in particular without the ball, and then when I have the ball I just have to play my own game and not feel any pressure.

“Obviously I’ve got role models, but they don’t play much football these days!” he continued.

“Zinedine Zidane was one of the best players in the world and you had someone like Ronaldinho who was great on the wing, Iniesta a bit deeper.”

– “At United, people don’t think like in France. For them, it’s simple: either you’re good on the pitch or you leave,” he told Onze Mondial in 2022.

“They don’t look at where you came from, who you are.

“Plus, I’m with the person who has worked the most in the world of football: Cristiano Ronaldo. I can only learn next to him.”

The pass from Mejbri, the assist from Diallo, the finish from Shoretire 🔥 pic.twitter.com/ScQUdjUW4H

– “We have Hannibal included in the squad,” Manchester United interim manager Ralf Ragnick said to the media about Mejbri’s move to the first-team set-up.

“He will, from now on, regularly train with us and be a regular member of the squad.

“From what I’ve seen so far, I think he’s a promising talent. He deserves to be part of the group for the rest of the season.”

– “He can play in a lot of positions: he can be a playmaker, he can be a regista [deep-lying playmaker], he can be a defensive midfielder, he can be a winger… but for me, his best position is central midfield,” the Tunisian Football Federation’s sporting director Mohamed Slim Ben Othman told The Athletic.

“He likes to be the player who can organise and coordinate his team. He has big physical abilities and is very selfless despite his large technical qualities.

“I see him as a central midfielder — similar to Luka Modric. He is someone with a big potential in this position and I think that even Manchester United see this and are trying to improve him as a box-to-box player.

“I see him like Paul Pogba in this role for his club. I hope that he will be happy in this position.”

– “Hannibal’s a leader. The way he plays his football is 100mph, he’s non-stop running up and down,” former head of first-team development Nicky Butt told the Manchester Evening News.

“He’s got his own path. We make sure when we sign players we always speak to the parents and give them an example of all different ways of getting into Man United’s first team.”

“The first objective for any player that arrives from outside of the country is to settle and build relationships and acclimatise, in terms of where are you going to be living, what do you know about your environment.

“That’s really the only expectation we have on him at the moment in these early phases; it’s just to settle. And he’s doing that nicely. And then it’ll be about how do we help to nurture him, to challenge him to get as close to the first team as we possibly can?”

– “He is composed, can go past a player and break a line,” a United source told the Athletic.

“He actually takes the piss sometimes against players a couple of years older than him. He’ll feint to strike then drag it and shoot the other way.”