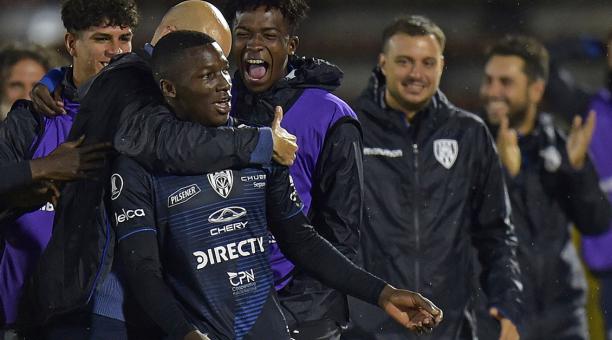 With Paul Pogba being linked with a move away from the club, Manchester United are reportedly targeting Independiente del Valle’s Moises Caicedo.

According to reports in Ecuador, Caicedo’s agent is set to meet United’s directors next week and the 19-year-old is valued at around £5.5million.

We’ve brought you the lowdown on the talented teenager who could be heading to Old Trafford during the January transfer window.

Born in Santo Domingo, Ecuador’s fourth-biggest city, Caicedo started out at Espoli and Colorados SC before joining Independiente del Valle at the age of 13.

Success was to come in the youth ranks, as Caicedo and his team-mates won the Copa Mitad del Mundo and defeated Real Madrid in the Adidas Generation Cup final. He also captained his side to victory against River Plate in the Under-20 Libertadores final.

Caicedo only made his first-team debut for Independiente del Valle in October 2019, but he is already looking like a key player for both club and country.

The 19-year-old has made 30 appearances for Independiente, scoring six goals and assisting a further two goals, including a goal and assist against Flamengo in the Copa Libertadores.

His record for Ecuador is pretty incredible so far, helping his country win three of their first four World Cup qualifying matches.

He grabbed a goal in a 4-2 win against Uruguay, two assists in a 3-2 victory over Bolivia and another assist as Ecuador beat Colombia 6-1.

That goal against Uruguay made Caicedo Ecuador’s youngest ever goalscorer, as well as the first player born in the 21st century to score in CONMEBOL World Cup qualifying.

Caicedo largely played as a holding midfielder during his youth days and is very comfortable there, picking up the ball from the centre-backs and breaking up opposition play.

In recent times, the teenager has become more of a box-to-box midfielder who can make key passes and contribute goals for his side.

This shows a level of tactical versatility – which is a massive bonus for somebody so young – while athleticism is another one of Caicedo’s strengths.

The youngster is already renowned for his high-energy and aggressive pressing and reportedly models his game on Chelsea’s N’Golo Kante – but idolised former United stalwart Antonio Valencia when he was growing up.

United have been looking for a long-term successor to Nemanja Matic and Caicedo would reportedly go straight into their first team.

🔥⚽🇪🇨 18 year old Moises Caicedo with this spectacular golazo to seal the points for @IDV_EC in the #Libertadores! pic.twitter.com/Ec0BTMCj79

– “Moises understands the game, he has grown a lot in his understanding since he came to the first team,” Miguel Angel Ramirez, the coach of Independiente de Valle, told Marca.

“He has a great first touch and good control, which helps him keep the game moving.”

– “Of his characteristics on the field of play, the cold blood with which he handles the ball in front of the back row is striking, to deliver the ball fluidly, either with simple passes or a precise long movement,” Spanish website AS noted.

“On the other hand, he has an innate facility to be well-positioned and read actions to always be in the right place.”

– “My challenge is one day to be in the elite of world football. I have proposed this to myself, my dream is to play in the big leagues,” Caicedo told Global Digital TV in December 2020.

“I really like the game of N’Golo Kante and Paul Pogba, I learn a lot from them every time I see them. I always try to do what they do, that’s why they are there.”

– “My dream is to arrive at Manchester United,” he told Mundo Deportivo in May 2020. “I like English football a lot because it is a quick style of football.”

– “I’m a good ‘5’, I move well and encourage my team-mates,” Caicedo said. “My reference is N’Golo Kante. He is a great footballer and moves all over the field.”

– “I’ll tell you the truth, I dreamed about this, being a footballer, playing in Independiente del Valle,” Caicedo told the Libertadores’ official website. “I never dreamed of being in the national team at 18.”

A tribute to Antonio Valencia, the winger turned world-class right-back