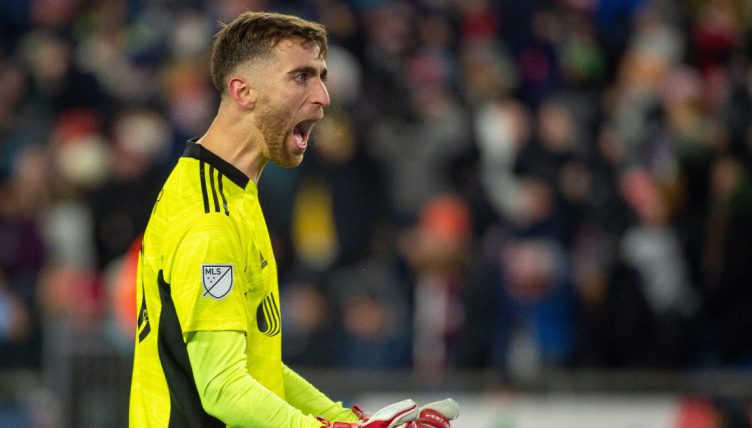 The Premier League is set to get its newest American, with Matt Turner joining Arsenal next summer.

The North London club has agreed on a deal with New England Revolution that will see the goalkeeper follow in the footsteps of Tim Howard and Brad Guzman to head to the Premier League.

Normally the USA’s biggest export to England is its movies and TV shows, but an increasing number of players are heading across the pond to the Premier League, with ‘soccer’ (we’re deeply sorry) continuing to grow in the states.

So we’ve compiled everything you need to know about Arsenal’s new Captain America in one place. Yeehaw.

Born and bred in New Jersey, Turner is 27-years-old and has been New England Revolution’s number one since 2018.

In the US, soccer is run in a similar Collegiate system to other sports like Basketball and American Football.

This means Turner played his College years with Fairfield University but found himself ‘undrafted’ at the end of the MLS 2016 draft.

For many US players that marks the end of their professional career or at least ends their hopes of making it big, but Turner has completely bucked that trend.

He signed a contract with New England in 2016 and after two years on loan with USL (America’s de facto second division) side Richmond Kickers, he soon found himself New England’s number one.

Turner has since gone from strength to strength and last year won the MLS’ Best Goalkeeper award along with the Man of the Match award in the MLS All-Star game.

His brilliant campaign last year prompted him to battle it out with Manchester City’s Zach Steffen for the US’ number one spot. Turner helped his nation win the 2021 CONCACAF Gold Cup as the starting ‘keeper.

With Arsenal having signed Aaron Ramsdale in the summer it would be fair to question their need for another goalkeeper, but Turner’s signing is seen as a sensible and financially sound move by the club.

It opens up the possibility for Bernd Leno to depart the club, the German having been usurped by Ramsdale this season.

Turner would provide a cheap replacement on lower wages, freeing up the money for spending elsewhere. He is reportedly going to cost Arsenal just £5.8million.

Few players go from undrafted in the MLS to a Premier League club, but Turner has managed it.

Well, believe it or not, as a goalkeeper he plays in between the sticks.

For comparison, Ramsdale has a saves per 90 stat of 3.58 and a save percentage of 76.7%, both only slightly higher than the American number one.

Last season he faced 4 penalties outside of shootouts, saving two.

Perhaps most importantly for a modern goalkeeper, Turner is confident with the ball at his feet.

He had a pass completion rate of 72.3% last season, actually better than Ramsdale’s 68.7% so far in the Premier League this season.

Most impressively that includes a long pass completion ratio of 54.9%, quite a good bit better than Ramsdale’s 43.5%.

In terms of how much of a sweeper-keeper the American is, Turner performs around 0.57 defensive actions outside of the penalty area per 90, comparable to Ramsdale’s 0.61.

“Anytime I get to wear the national team crest whether it’s just for training, for a game or on the bench is truly special. It’s [his national debut] something i’ll remember for the rest of my life.”

“When it comes to penalty kicks it’s the least pressure situation for a goalkeeper. You’re not expected to save them. In that moment, [facing a penalty on his debut] I was calm, I felt this quiet energy and I felt like I was going to save it. I gave myself a chance to make the save and I was able to.”

“[On Joining a Premier League club] 100% on the radar, it’s something I want to happen. It’s a tricky year for it, obviously with COVID it’s been really hard. Teams aren’t spending quite as freely. Typically, come summer months, the market for goalkeepers is very different.”

“There’s a lot of capable second-string goalkeepers in the top five leagues around the world, that are looking for games, are looking for places where they can play and if clubs can offset their costs by bringing in a loan instead of buying a player, they’re probably going to lean that. It’s challenging.”

“I don’t have a dream club. However, it is my dream to play in the Premier League in England. Hopefully, that happens one day, but I’d be happy to play in any of the top five leagues for sure.”

“It is true that there is interest [from Europe], It all comes down to what is best for me. The World Cup is 10 months away, I want to make a smart decision. I feel good about where I am now and how far I have come, but I would like to challenge myself one day.”

“If you had told me at the end of 2020 about how 2021 was going to be for me, I probably wouldn’t have believed it. I think I gave my best in the opportunities I had.”

🚫 Matt Turner saves a penalty on his @USMNT debut 🚫 pic.twitter.com/kL0mj9yheu

– ” [Turner] Went to Fairfield University, was undrafted out of college, now he’s playing with the national team and he’s headed to Arsenal,” US national team manager Gregg Berhalter said after USA’s victory over El Salvador.

“It’s just an amazing story and it’s all down to him, his work ethic, his belief in himself, and his never-give-up attitude.

“It’s a great story and Matt is a great guy, a great teammate and we’re lucky to have him. Tonight was an example of where he did everything that he had to do. He was calm in all situations.”

– “He’s been our most consistent player this year, no question about it.” New England Revolution manager Bruce Arena said in 2020.

“We need to get other players to play more consistent game in and game out. We’ve had some very good performances, but not on a consistent basis like Matt has performed.”

– “I’ve worked with a lot of top Premier League goalkeepers, and he’s up there with the top three I’ve worked with,” former Chelsea Goalkeeper Kevin Hitchock said.

“I know at this moment, he is as good as any top Premier League goalkeeper.”

Matt Turner was a 🧱 wall!pic.twitter.com/pfKemJ2RDV