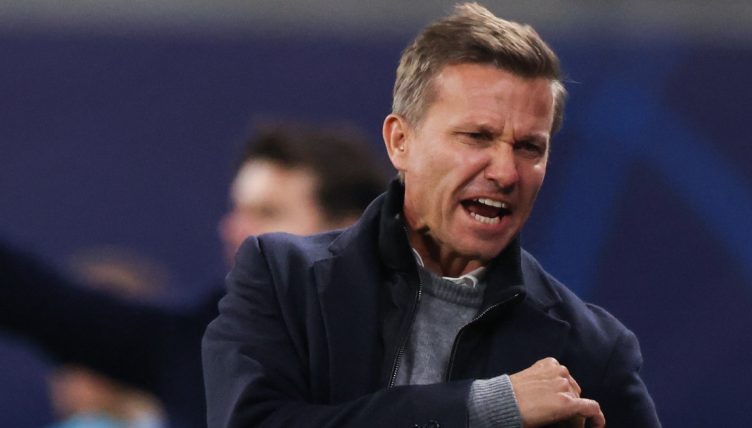 American manager Jesse Marsch has taken over the reins at Leeds United as the club aims to stave off relegation following the shock departure of Marcelo Bielsa.

Club chairman Andrea Radrizzani made what he described as his “toughest decision” to sack Bielsa over the weekend with Leeds winless in their last seven Premier League outings – a return to the Championship looks a realistic possibility as the Whites are currently just two points clear of the bottom three.

Whilst the Argentine will forever be remembered for his heroic contributions to the club, the new man in the dugout will quickly need to work magic to skyrocket Leeds up the table to safety – Marsch has a serious job on his hands.

Here’s everything you need to know about Bielsa’s successor.

It’s a fair assertion that most in Europe will be unaware of Jesse Marsch’s playing days. The 48-year-old had a 14-year career in the United States; the highlight of his time was earning two caps for his national team.

Marsch racked up over 300 appearances for DC United, Chicago Fire and Chivas USA before retiring in 2009.

His playing career is perhaps best remembered for snapping David Beckham in an MLS match.

But, as proven with many managers – Arsene Wenger, Jose Mourinho and Jurgen Klopp, to name just a few – a glistening playing career is not always the stepping stone needed to go on to become one of the world’s best coaches.

It would be wrong to suggest Marsch is elite just yet. However, his coaching CV to date – he started managing in 2011 – is largely an impressive one.

He began his managerial career in the MLS at Montreal Impact. He left the Canadian outfit by mutual consent after one season following a respectable 12th place finish in the club’s debut season.

The former midfielder had to sit tight awaiting his next opportunity, which eventually came three years later at New York Red Bulls. Marsch was at the helm at another top-tier U.S team, and he soon made his mark – he won the MLS Supporters’ Shield and Coach of the Year in his first campaign.

In 2018 – boasting the record as the coach with the most victories in New York Red Bull’s history (75) – he joined current Manchester United boss Ralf Rangnick as his assistant at Bundesliga club RB Leipzig.

After a brief stint in Germany, Marsch returned to head coach duties at Leipzig’s sister club Red Bull Salzburg in Austria. The Wisconsin-born man enjoyed two years of success at the club, winning a league and cup double in both seasons at the club.

Marsch also made history in 2019, becoming the first US manager in Champions League history. His Salzburg side marked the occasion in style, running out 6-2 winners against Genk – with a certain Leeds-born teenager named Erling Haaland scoring a hat-trick. Whatever happened to him?

“I’m very grateful to be a part of the Red Bull family and have had this chance,” Marsch said following his swift departure.

In a similar fashion to predecessor Bielsa, Marsch prioritises an attacking style as a blueprint for how he wants his team to play – becoming the first American coach to win a European title in 2020, his Salzburg side netted 102 goals on their way to top spot.

With Leeds clocking up the worst defensive record in the Premier League this term – conceding 60 goals in 26 games – fans rightly will be more concerned about the strategy he’ll implement to stop shipping bucketfuls weekly.

Three key principles for a Marsch side to function are pressing to score goals, verticality and counter-pressing. Despite being flexible in the formations he uses – Marsch has regularly implemented 4-4-2, 4-2-3-1, 4-4-1-1 and 4-2-2-2 at his previous clubs – he demands intensity and aggression from his players; traits the current crop at Leeds have in abundance.

The American likes his team to hunt the ball to create advantageous goal scoring opportunities. There’s an emphasis on passing forward and having attackers in close proximity to retrieve possession quickly when play breaks down.

Much of his philosophy has been guided by Rangnick. Leeds will need his ideas to transfer to the squad more successfully than the German has managed at Old Trafford so far.

“Jesse and I had a great relationship. We still talk on the phone sometimes. He was an amazing manager for me, and we had some great memories together,” former player Erling Haaland said in November 2021.

“I am lucky to have gotten to know him as a coach, but also as a person. He was very good with me.

“As you saw, I was very happy on and off the pitch in Salzburg. Even though it was just six months, it was a good time. He is an amazing guy.”

“I couldn’t have more respect for what Salzburg are doing here, the way they play football. Salzburg were unbelievably strong, especially in the first half – massive respect for Jesse and what they did,” Jurgen Klopp told reporters after a thrilling Champions League group stage encounter at Anfield in 2019.

“Marsch was the right man for the wrong time at Leipzig — about five years too late in light of the side’s tactical arc or maybe a couple of years too early as far as his own experience as a head coach, a combined six years leading the Red Bull clubs in New York and then Salzburg, Austria — is concerned,” German journalist Raphael Honigstein wrote after his departure at Leipzig.

Bielsa impossible to replicate, a legend no doubt but time to get behind Jesse. Had him for 3 years at NYRB, can’t say enough about him. #LUFC https://t.co/EhuL6hfakE

“In football, the right mentality determines success. Diligence, energy, concentration, working hard every day and having fun – that describes the environment in which we can get the best out of the players,” Marsch said whilst in post at Salzburg.

“And I’m not talking about results. If you only think about results, you forget the steps on the way to success. I pay close attention to our players, in training, in the cabin, in the canteen.

“How well do you know yourself? How well do they support each other? How hard do you work for each other in the field? What development has everyone made?”

“But I think being separated gave me more clarity, to go with my gut,” he told The Athletic to explain his departure from RB Leipzig.

“I was totally fine with the notion of thinking about something else, to go coach a team how I want it to be.”

“I was totally fine with the notion of thinking about something else, to go coach a team how I want it to be.”

Marsch has also spoken in great detail about what he’s looking to bring to Leeds:

💬 𝗝𝗲𝘀𝘀𝗲 𝗠𝗮𝗿𝘀𝗰𝗵: “We have all the tools here, I’m here to help this group" pic.twitter.com/WPkHOC9bgb