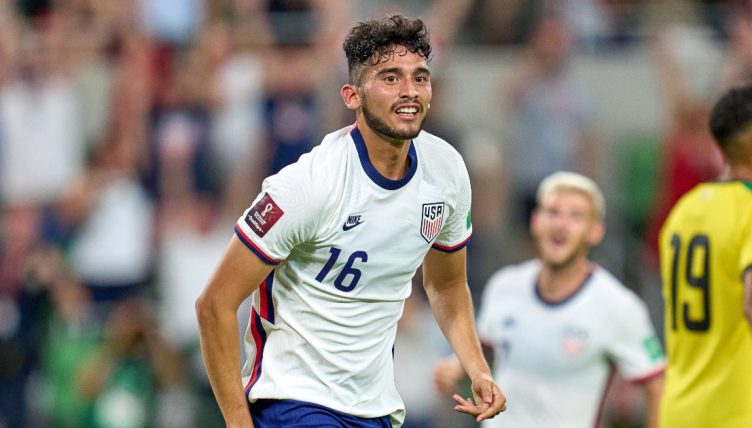 Ricardo Pepi is an 18-year-old striker making waves in the MLS – and the likes of Bayern Munich, Liverpool and Manchester United are all interested in his services.

Pepi only burst onto the scene in 2021 but is already a crucial player for FC Dallas and made his international debut in September. He’s only been on the scene for a short period, but the forward has already excited a host of European clubs.

We’ve gathered all the information you need to know about the FC Dallas and USMNT player.

Pepi is an 18-year-old striker from El Paso, Texas. He came through the youth academy at FC Dallas, impressing the club’s coaches and earning a professional contract at 16.

In fact, Dallas gave him his first-team debut literally the day after he signed his first deal. He’s long been a bright prospect by the club but Pepi has enjoyed an incredible 2021 and established himself as one of America’s hottest talents.

After scoring only three times in his first 26 MLS appearances, Pepi has 13 in 27 this season. Those goals impressed the USMNT, who gave him a debut in August.

On his international bow, Pepi scored and registered an assist during the win over Honduras and followed this up with both goals in a 2-0 win over Jamaica.

And now, with FC Dallas out of contention in the MLS play-offs, speculation surrounding Pepi’s future has reached fever pitch.

Even though he isn’t 19 until January, the striker has attracted the attention of a host of European clubs ranging from Brentford and Brighton to Bayern Munich, Liverpool and Manchester United.

Sources from CBS have claimed that Pepi has agreed on personal terms with Bundesliga side Wolfsburg but that a number of other clubs are putting out feelers for his services.

Pepi is primarily a centre forward, one that plays through the middle. While some forwards seem adaptable and could be utilised in wider positions, Pepi’s role as a central attacker already seems set.

As well as being a promising goalscorer, Pepi is establishing a reputation as a fine pressing forward.

Pepi is in the 89th-percentile for pressing per game – he typically applies pressure 22 times per match. The teenager presses all over the pitch and ranks highly in attributes such as tackling in the defensive third and winning interceptions.

With a host of European clubs currently worshipping at the altar of gegenpressing, it’s no wonder that Pepi has attracted so much attention.

Also, all 13 of his MLS strikes have been from open-play, so there can be accusations of stats-padding here – Pepi looks the epitome of a modern forward.

About choosing to represent the USA over Mexico – “I feel like the U.S, was trusting me and my game to be able to go out on that field and do the best I can. I feel like I was in a very good moment, and I could help other teams.

Telling OneGoal about what he needs to keep improving – “Personally, I think I have everything. I think maybe just watching some video learning more about the game and probably getting stronger, to be honest, because there’s a lot of players out there who are older [and] may be stronger than me.

“So I think that’s one of the things where I need to go, my body just needs to get a little stronger.”

“You have to go somewhere where you play right away,” Bayern Munich youngster Chris Richards told Transfermarkt when asked if he had any advice for Pepi.

“Sometimes you get caught up in the big names, but it might not be the perfect situation because sometimes you get stuck behind a great striker at a big club, and it could be hard to get past him unless he is injured.

“So go somewhere where you can play because if you do what you’re supposed to do on the field, the bigger clubs always come calling.”

“It’s his place to lose after what he did in such an important game,” said former Premier League star Clint Dempsey after his USMNT debut. “He basically played a part in all four goals. [He showed] no fear.

“He was never out of his depth … He’s the complete striker. He scores goals, works hard, holds up the ball and he’s just a problem to deal with … I’m excited about what this kid has in store for his future.”

“He’s a fun kid who loves being around the goal and loves trying to score. When we were talking about penalties, he was ready. And it shows in the way he moves and how he gets himself in position and some of the goals he scores.”