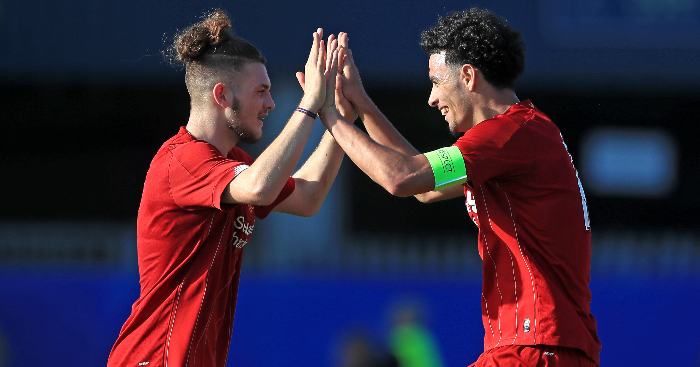 With Jurgen Klopp and Liverpool‘s senior first-team squad all out in Qatar to contest the Club World Cup, Under-23s coach Neil Critchley has been left in charge for the League Cup quarter-final against Aston Villa.

To make it this far, the Reds have navigated past MK Dons and a remarkable penalty shootout win over Arsenal following a 5-5 draw with a mix of experience and youth but this time it will purely be their youngsters looking to progress.

Here’s who’s been predicted to start against Aston Villa, and everything you need know about them.

Hailing from Cork, the 21-year-old goalkeeper has put in a string of impressive performances for the Republic of Ireland’s Under-21s and is touted to make the step up when his youth team coach Stephen Kenny succeeds Mick McCarthy in charge of the seniors.

With the goalkeeping trio of Alisson, Adrian and Andy Lonergan at the Club World Cup, he’ll continue his run of League Cup starts having done well to keep a clean sheet against MK Dons before a match-winning penalty save against Dani Ceballos in the last round.

Still just 17, the Dutch right-back has quickly become one of the more recognisable names in Liverpool’s youth ranks after making the switch from Ajax’s academy in 2018.

He scored first Liverpool goal in the win over MK Dons and followed that up with a stunning solo effort in the Under-17 World Cup.

After featuring here, he’ll fly out to Qatar to join up with the first team along with Sepp Van den Berg and Harvey Elliott.

Chester-born Wales Under-19 international Boyes has been on Liverpool’s books since Under-11 level and developed particularly well while Steven Gerrard was in charge of the Under-18s.

Now 18, this could prove something of a breakthrough campaign for the academy star. He’s played in all six of the UEFA Youth League games as well as eight times in the Premier League 2, the time has now come for his senior debut.

Signed from PEC Zwolle in the summer, the 17-year-old Dutch prospect was one of the only additions in a low-key summer transfer window for the newly-crowned European champions.

He was given a difficult night’s work against the likes of Gabriel Martinelli and Ainsley Maitland-Niles last time around, shipping five goals, but Liverpool nevertheless made it through and he’ll have another opportunity to show what he can offer this time around.

After excelling in Liverpool’s pre-season tour of America, holding his own against Jadon Sancho in a friendly against Borussia Dortmund, the Algerian-born Le Havre academy graduate follows in prodigious footsteps: Paul Pogba, Dimitri Payet and Benjamin Mendy have all come through that hallowed youth system.

He won the FA Youth Cup last season and it’s hoped he can be Andy Robertson’s understudy going forward.

A surprise inclusion in Liverpool’s 29-man Champions League squad, Kane is clearly well thought of in the senior hierarchy.

The 20-year-old midfielder was a key player on loan at Doncaster Rovers last season as they narrowly missed out on the play-offs and was regarded as one of the best young players in League One.

At 22 years of age, Spanish talent Chirivella will likely be the oldest Liverpool player on the pitch as he looks to lead from the base of midfield.

He’s had three loan moves away – at Go Ahead Eagles, Willem II, Extremadura – since originally joining from Valencia’s academy in 2015, but is now back in the fold at his parent club.

He first made his senior debut in January 2016 in an FA Cup match against Exeter but went over three years without appearing for Klopp’s team, coming off the bench in each of the last two rounds. There was some controversy about his appearance against MK Dons, as he lacked international clearance, but Liverpool got away with a fine.

Wales Under-21 international Christie-Davies will likely be one of the older and more experienced players on the pitch here on his senior debut, having made the bench on a couple of previous occasions.

The Brighton-born midfielder was on Chelsea’s books as a teenager before making the switch to Merseyside in the summer of 2018. He’s said to be an adept and talented passer of the ball.

Elliott notably made his league debut for Fulham just 30 days after his 16th birthday, becoming the youngest-ever Premier League player.

Less than a year on, he’s left Craven Cottage for Anfield and has caught the eye when given opportunities in this cup run. He was unfortunate not to score against MK Dons, hitting the woodwork twice, while he put in a lively performance against Arsenal, winning a penalty.

People need to talk more about this footwork and ball from Harvey Elliott yesterday.

Hailing from Darlington and a product of the Newcastle United academy – though no relation to fellow graduates Sean and Matty Longstaff – 18-year-old winger Luis Longstaff made the switch to Anfield back in 2015.

A regular for Critchley’s Under-23s, he can play on either wing or through the middle and has scored three goals in 10 appearances in the Premier League 2 this season. An unused substitute in the 2-0 win over MK Dons, he’s expected to make his first-team debut against Villa.

The most high-profile starlet left behind is a doubt to make it after suffering an ankle injury, which would be a shame for the highly-rated striker.

Tipped to break through as a first-teamer eventually, he started each of their last two League Cup games, dispatching a penalty in the shootout win over Arsenal.

“He’s got a knock so he’s doubtful,” said Critchley. “We’re assessing him, fingers crossed he makes it. We’ll see.”