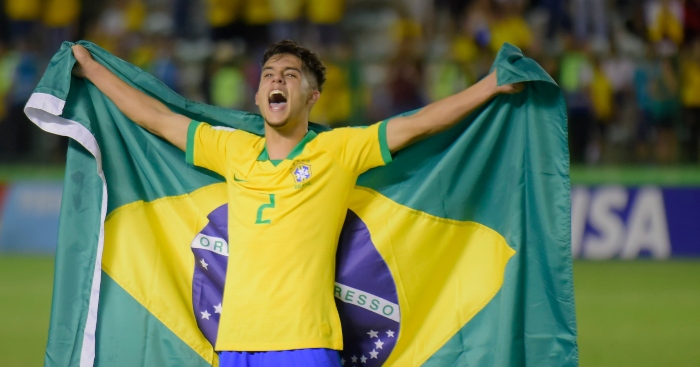 Despite already building an amazing squad at Manchester City, Pep Guardiola is now targeting some of the world’s most highly-rated young prospects.

City are making plans for the future and have announced the signings of teenagers Mikki van Sas and Yan Couto in 2020.

We’ve brought you the lowdown on City’s latest signings who could become household names in the near future.

Born in February 2004, Van Sas started his career at hometown team USV Hercule before moving to FC Utrecht in 2016.

The goalkeeper was promoted to the Under-17s in 2019 and has kept eight clean sheets in 18 league appearances this season.

“Mikki is a complete and modern goalkeeper in the making, which fits exactly with FC Utrecht and the goalkeeper profile of the club,” FC Utrecht technical director Jordy Zuidam told the club website in February 2019. “He excels in football and in one-on-one situations.”

He was capped four times at Under-15 level by the Netherlands and has recently been promoted to the Under-16s, keeping two clean sheets in two appearances.

Manchester United, Barcelona and Ajax were all reportedly interested in the teenager, but City succeeded in bringing him to Etihad.

The 16-year-old will first receive a scholarship for one-year before putting pen to paper to a contract for the next three seasons.

📝 Goalkeeper Mikki van Sas (16) will move from @fcutrecht to @ManCity.

Born in Curitiba, Couto joined the youth setup of his hometown club at the age of 10 in 2012.

The right-back has already been billed as ‘the new Dani Alves’ and the teenager was shortlisted in The Guardian’s Next Generation 2019 list.

He has won 13 caps for his country at Under-17 level and was a key part of the Brazil side that won the Under-17s World Cup in November 2019, providing the assist for the late winner against Mexico in the final.

The 18-year-old has only played two games at senior level for Coritiba, but his performances for Brazil caught the eyes of Europe’s biggest sides.

Barcelona, Borussia Dortmund and Bayern Munich were all interested in Couto before Guardiola intervened to persuade him to join City.

“I had a good conversation with Barcelona and I thought I would go there,” Couto told ESPN Brasil in May 2020. “But then Manchester City appeared and showed me how things would be there.

“At first, they wanted to loan me out straight away, but then I spoke with Guardiola. He told me that I would do pre-season with the first team and from there it would depend on me.

“Guardiola was very attentive and said that he was really happy I was coming to the club. It was the best decision for me.”

The Premier League side agreed to pay an initial €6million fee and that could double in add-ons if he lives up to expectations.

Couto will complete his move to City in July, and he has recently been linked with a loan move to Leeds United next season.