Everything you need to know about Spurs record breaker Dane Scarlett 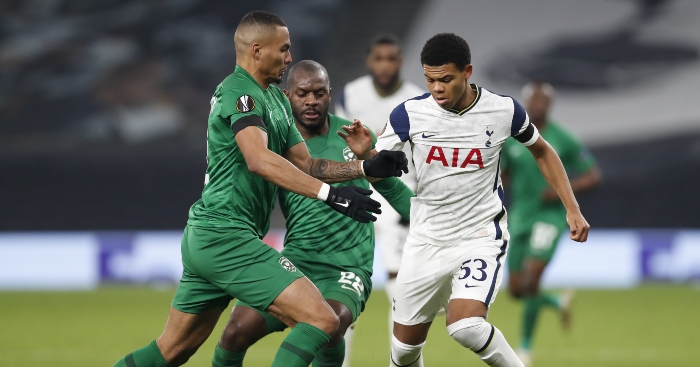 When Dane Scarlett came on during Tottenham‘s 4-0 win against Ludogorets, he became Spurs’ youngest player of all time.

We decided to take a look at everything you need to know about Spurs’ latest starlet.

It has been a rapid rise for Scarlett, who predominantly plays as a striker, as he still hasn’t made an appearance for their Under-23s.

The youngster had been in sensational form for the Under-18s though, scoring 10 goals and assisting another three in just eight league appearances.

His tally includes four goals and an assist from the striker’s most recent game at Under-18s level, a 7-0 victory over Southampton.

Scarlett has also impressed in the youth ranks for England, scoring one goal in two appearances for the Under-15s, before scoring a brace in his only appearance for the Under-16s to date, earning a 2-0 victory over Denmark.

Not everything has gone Scarlett’s way though, as the teenager suffered a knee injury that kept him out for 10 months last season.

After a full recovery was made in August 2020, Scarlett was involved with the first team during making his senior debut against Ludogorets.

Dane Scarlett (aged 16 years & 247 days) has become the club’s youngest first-team player, surpassing the record of John Bostock who was aged 16 years & 295 days when he made his Tottenham debut in November 2008

When Scarlett came on against Ludogorets, we got a small taste of what the youngster is capable of and what his game is all about.

The striker was willing to run behind the Bulgarian outfit’s defence, while he also shows that same energy to win the ball back, as he pressed well near the edge of the box – almost getting an assist for fellow debutant Harvey White in the process.

Getting behind the opposition’s backline is not something he has done in this game alone, as was highlighted in the clip below and on many other occasions.

The youngster likes to get in the box and can be a tricky customer once he gets there, having won and converted penalties against West Ham and Arsenal for the Under-18s this term.

Scarlett can also be useful in the air when the ball is delivered into dangerous areas, as three of his four goals against Southampton came from headers.

Dane Scarlett returned to u18s football after his preseason with the first team. He hit two including converting this penalty after a great run #spurs u18s will be have a good go at it this season @DScarlett09 #spurs #thfc pic.twitter.com/s2E9CcGvGm

After the game had come to an end and the 4-0 win against Ludogorets was wrapped up, Scarlett tweeted:

A year ago sustaining a season ending Knee injury. To making my @SpursOfficial debut, also becoming the youngest ever Spurs player is a dream come true for me and my family. Thanks to everyone that’s supported this far. It was a shame I had to make my debut without you Spurs fans pic.twitter.com/xquGq2ueAh

“When I played him I didn’t know he was the youngest one,” Jose Mourinho said after Scarlett’s debut. “It’s a good thing. He had a good pre-season with us, it was a good experience for him at the age of 16 to have a pre-season with the first team.

“He played a few minutes in some of our pre-season matches. Of course, he went back to his [U18] team. He trains with them. Yesterday when I felt there was space for another young player in the squad, I didn’t decide by myself, I asked my football director and I asked the academy director and they contacted all the coaches. ‘Who deserves?’

“There are of course a few names, especially the U18s because they are doing so well. They gave me his name and because I knew him already I thought if the opportunity would arise it would be a good chance for me and a good feeling for everyone in the academy.”

Seven of the funniest things Jose Mourinho has posted on Instagram