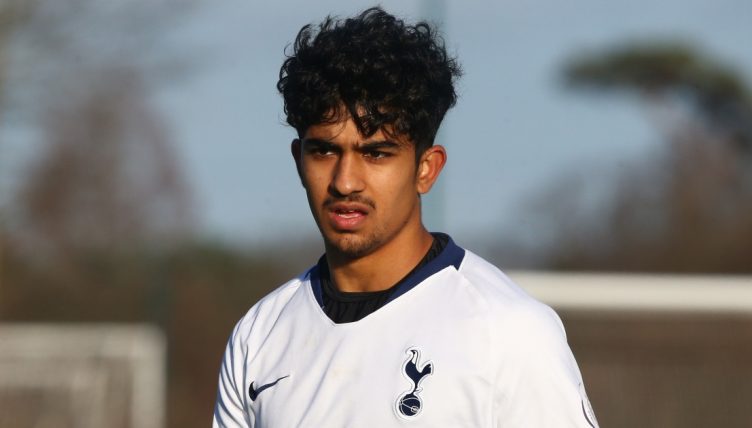 Dilan Markanday made history earlier this season when he became the first British Asian to play for Tottenham Hotspur.

Markanday made his Spurs debut during their Europa League match against Vitesse in October and hopes are high that the 20-year-old will break into the first-team squad under Antonio Conte.

We’ve collected everything you need to about the promising Spurs youngster.

Markanday was born in August 2001, to Indian parents in the London borough of Barnet. In 2017, at the age of 15, Markanday joined Tottenham’s youth system.

He has represented the club at Under-18 and Under-23 levels, impressing the coaches at Spurs with his close ball control, vision and match-winning contributions.

After catching the eye of Nuno Espirito Santo, Markanday made his historic senior debut during the 1-0 reverse against Vitesse in the Europa Conference League in October 2021.

According to the Professional Footballers’ Association, Markanday is currently one of only 15 professional players of South Asian heritage in the men’s game, with a further 20 signed to scholarship terms – so his debut at Vitesse was something of a big deal.

Forcing his way into Conte’s plans will be a challenge, but the youngster can’t do much more to get himself noticed.

Markanday scored four goals in as many games for the Under23s in November 2021, including a double in a 3-1 win over Manchester City and an injury-time winner against Manchester United, to earn the PL2 Player of the Month award.

In total, he has netted 11 times and registered four assists in 12 league matches this season.

Because of his need for first-team experience, Markanday has been linked with a loan move in January, with clubs including Bournemouth, QPR, Stoke and Nottingham Forest reportedly registering their interest.

His contract expires in the summer, but Spurs have offered a new deal with the club and there’s every hope that Markanday will stay at his boyhood club.

The 20-year-old is a player that creates excitement whenever he has the ball at his feet, possessing an excellent technical ability with the vision to match.

Blessed with the ability to drive the ball into the final third of the field, Markanday has been known to pick out some quality passes or, as his goalscoring record suggests, find the back of the net with impressive regularity.

Usually found on the right-wing, he’s has been compared to Aaron Lennon for his fleet of foot but we can’t help feeling that Markanday may have his sights set higher than the former Spurs winger.

Being a left-footed player, he grew up idolising Manchester United legend Ryan Giggs. Markanday also cites Lionel Messi, Mohamed Salah, Arjen Robben and Riyad Mahrez as his idols and inspirations while growing up.

– “It was a proud moment being the first British Asian [to play for Spurs], it is obviously great,” Markanday told fans from Tottenham’s various supporter groups in India over a Zoom call in November 2021.

– In an interview with The Sun during the same month, he added: “I have been aware of it on social media, people supporting me, following me and following my journey,” Markanday revealed.

“I try not to let it affect my football, I try not to put pressure on myself to think I have to do it for other people. I am doing it for myself and along the way, I hope to inspire other people that anything is possible.

“The dream is to play for Tottenham for the next 15 years, playing every game, but obviously I know things might not work out and there are going to be ups and downs.”

A lovely finish from Dilan Markanday for his second goal of the afternoon @SpursOfficial U23's. Now with a hat-trick in the bag at 2-3 at halftime.

At 20 years old, it can't be too long before he gets a break into the first team. Looks like a great prospect! pic.twitter.com/HmT0AHWWED

– “For somebody like Dilan to be breaking into the Tottenham first-team squad… of course, he’s still got a long, long way to go, but people from that area of London from a certain background seeing that happen, it is 100 per cent a fantastic thing” – former Aston Villa and Wales defender Neil Taylor said to i in November 2021.

– Alok Badri, chairman of the India Spurs supporters’ group, recalled Markanday’s debut: “It was 11.45pm in India on a weekday. I was almost going to sleep looking at the way the game was going but the substitution got me wide awake again because we finally saw Dilan make his debut for Spurs.

“This debut opens a few more doors for us, it allows us to dream. Spurs’ reach and following in India is about to increase by a considerable margin.”

– “There were days when he was getting up at five or six in the morning to complete his homework so he could also make training in the evenings,” said Julian Hails, head of football at Haberdashers Aske’s (Markanday’s old school).

“He was clearly able to manage everything and, as you can see by looking at him now, the hard work and sacrifices have most certainly paid off.”