The evolution of Pierre-Emerick Aubameyang on Football Manager 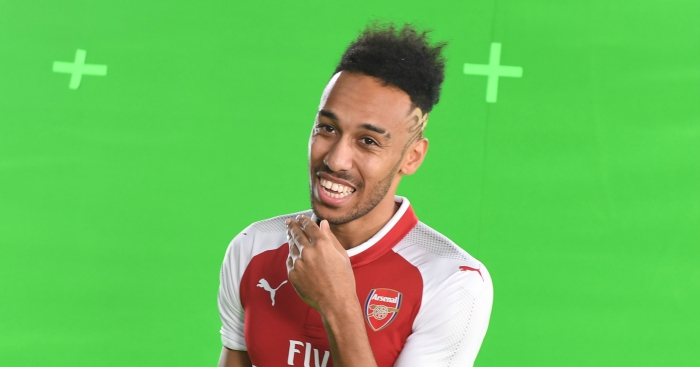 Arsenal have confirmed the signing of Pierre-Emerick Aubameyang in a deal which is set to spark one of the most intriguing merry-go-rounds of the transfer window.

Aubameyang has joined Arsenal in a club-record £56million move from Borussia Dortmund, with Michy Batshuayi set to move on loan to Germany as his replacement and Olivier Giroud expected to leave the Gunners to join Chelsea.

The signing of Aubameyang is no doubt a coup for the north Londoners, and Football Manager addicts will no doubt be looking forward to using the striker once they are able to update the game.

We’ve taken a look at how the Gabon international’s stats have improved on the game through the years and analysed just what he will offer Arsenal.

While Aubameyang had already spent time on loan at Dijon, Lille and Monaco before moving to Saint-Etienne from AC Milan, 2011 seems a nice place to start – as it was at this time he began to catch the eye in Ligue 1.

We’ve just found a thread on an old forum in which somebody signed him as “a cracking player in the SPL as a winger”, while another user replied: “Hm, I think Championship standard.”

The impressive pace is there but, still just 21, he is let down by poor finishing (nine), composure (nine) and concentration (ten). 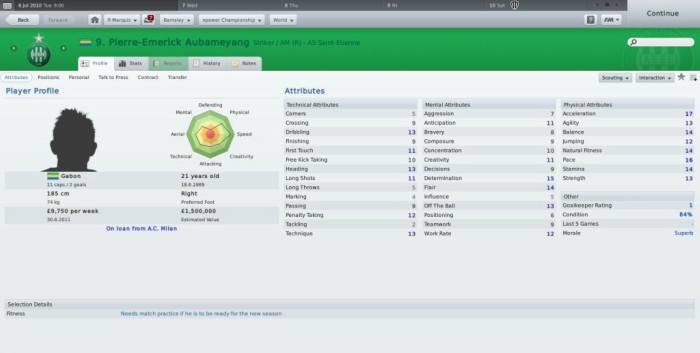 Two years on and Saint-Etienne have signed Aubameyang permanently, while he has developed into a much more well-rounded player.

Despite scoring 18 goals in all competitions in 2011-12, his physical attributes still outweigh his finishing ability, though his mental attributes have also improved across the board.

At a value of £6million, he would still make an excellent buy. 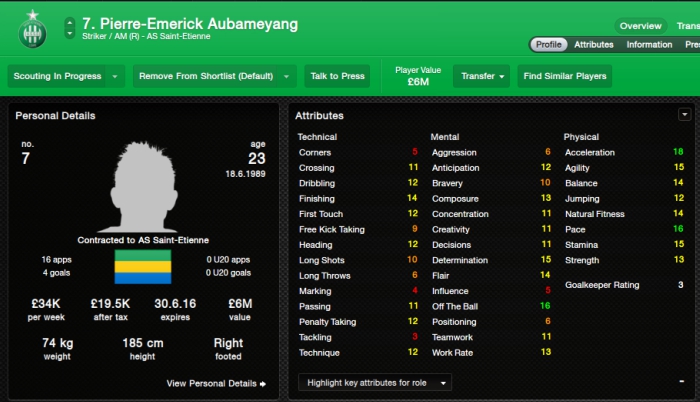 Fast forward another two years and, after 21 goals in his final season in France, Aubameyang moved to Dortmund and notched 16 in his debut campaign.

The striker’s finishing has actually decreased slightly alongside some of his mental attributes including teamwork, work rate, positioning, off the ball, determination and decisions.

His pace, however, has increased even further and his acceleration is unbeatable.

Twenty-five goals in his second season at Dortmund has seen his finishing, composure and concentration all improve.

Now 26 and valued at £17.5million, his pace almost matches his acceleration.

He also has a preference to play for Real Madrid… 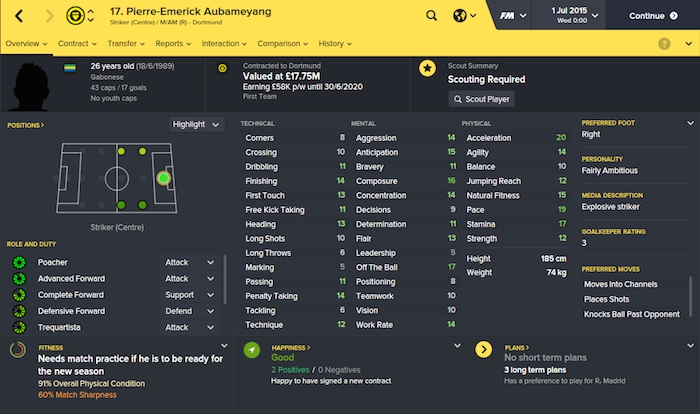 For a player who followed up his 25 goal haul with 39 in 2015-16, Aubameyang’s finishing stats remain curiously low.

A value of £47.5million is getting ever closer to what Arsenal have eventually paid for the striker.

Aubameyang hit the 40-goal mark in all competitions last season and his finishing stats have been bumped to 15.

His 20 acceleration is now matched by his 20 pace, while his off-the-ball work has been an impressive 18 for the last two editions.

Given he is valued at £68million, Arsenal might be happy with that they have paid to land the 28-year-old. 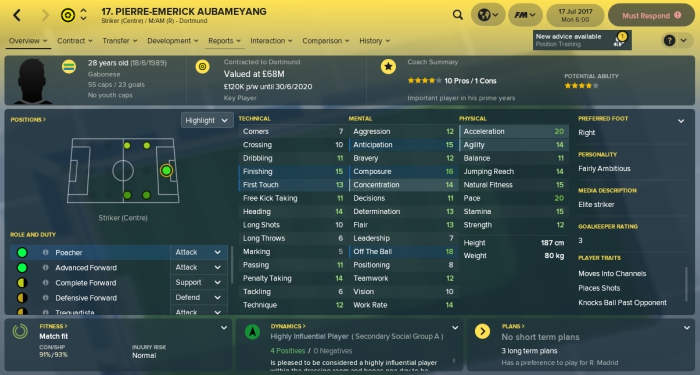