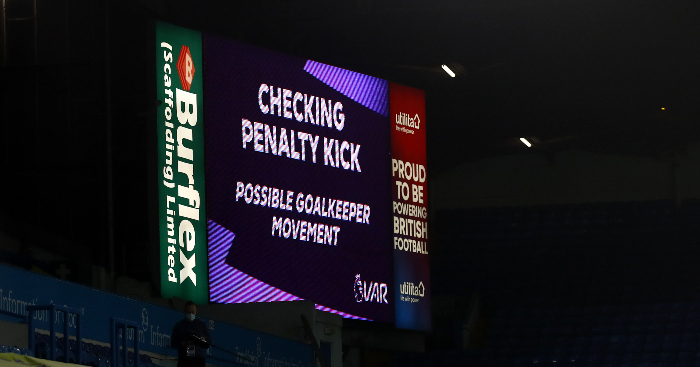 We’re now into the second season where VAR has been implemented in the Premier League, but it’s not getting any less contentious.

There’s been plenty of talking points from key incidents involving Liverpool, Tottenham, Manchester City and Leeds, to name but a few clubs affected by VAR’s most controversial uses, and that appears unlikely to change any time soon.

Here are some of the strongest and most interesting statements from ex-players, pundits, current players, managers and those involved in the administration side of things.

"I am for it but I'm aware that the fans hate it – that is my concern."@GNev2 looks at where VAR needs to be improved…#MNF pic.twitter.com/NjMPSvbqRr

“How is any goalkeeper supposed to cover an area of 7m32cm by 2m44cm without any foot movement while the players shoot from 12 yards with average speed of 70 mph which takes the ball 0.35 seconds to cross the goal line is beyond my understanding…” the Chelsea technical director posted on Instagram after Lukasz Fabianski was penalised for stepping off his line against Leeds.

“It is easy to criticise without giving any solution so here it is: CAN THE REFEREE JUST MAKE A SECOND LINE 4 FEET FROM THE GOAL LINE USING THE SPRAY AND THE PENALTY HAS TO BE SAVED IN BETWEEN?”

“I prefer to stay away [from VAR],” after Brighton scored a controversial equaliser against Spurs.

“Probably the referee should go to the press conference and explain. He had time to go to the screen so only he can explain why it is a goal.”

Earlier in the season his silence spoke volumes after an Eric Dier handball cost his team two points in injury-time against Newcastle.

Ludicrous. Utterly ludicrous law exacerbated by VAR. Can we have our game back please?

“Look, I’m an Evertonian. But I’m looking at it as ‘rules’,” the Australian told Optus Sport after VAR failed to intervene and send Jordan Pickford off after his challenge on Virgil van Dijk.

“And VAR is a rule. Whether it works in favour of Everton or Liverpool.

“The key element is quite alarming. That an individual inside the VAR box can be subjective. There should be [none of that] whatsoever. He has a duty to the game to say the rules are as they are.”

It’s “clear and obvious” we need a serious discussion about VAR. Sure I’m not alone in feeling like they are falling out of love with the game in its current state. pic.twitter.com/5FGgLtqbHs

“A lot of people I have spoken to are not enjoying football as much as they once did because it is constantly in review, constantly on a screen and you are still not getting the consistency we are looking for. I agree with Milly. A lot of footballers and a lot of fans would agree with him, too,” the Liverpool left-back told The Guardian.

“I thought if it’s above the arm here [above the bottom of the sleeve] that it’s not handball anymore. Everybody knows that it hits him here. I don’t know the rules.”

📺 A replay of the Gabriel Jesus handball.