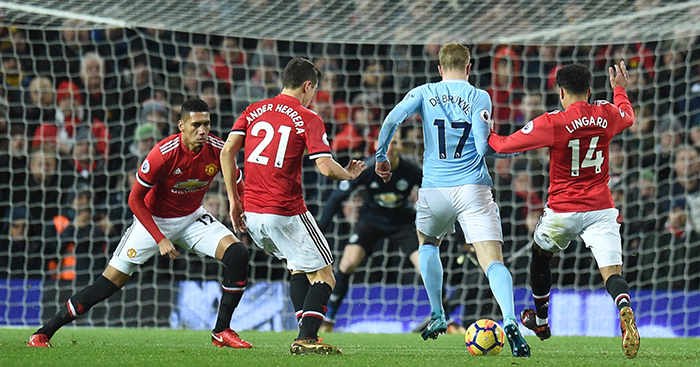 Pep Guardiola and Jose Mourinho have rather contrasting views on the importance of midfield dominance, but what would happen if they stretched their philosophies to the nth degree with Manchester City and Manchester United? We used FIFA 18 to find out.

There’s a certain value in pushing things to the brink. Who could forget Spain’s 4-6-0 formation in their 2010 World Cup-winning run, for example?

On the other end of the spectrum, just a few months earlier, we saw Mourinho’s well-oiled defensive machine purposefully giving up possession with Inter in the cauldron of the Nou Camp in that famous Champions League semi-final victory.

‘Whoever renounces possession reduces the possibility of making a mistake’, he believes, at least if you were to trust Diego Torres’ biography of the man, but even Mourinho wouldn’t opt to literally put 10 men behind the ball. Well, at least not from the first whistle.

And as much as Guardiola may push the boundaries of formations – he once described them as “nothing more than telephone numbers” – it’s unlikely he’d ever dare start a game without a single player in defence.

Well, if Guardiola and Mourinho won’t do it, we will. On FIFA 18 at least.

We picked a Manchester United team featuring seven defenders – including Marouane Fellaini over Paul Pogba because, well, he just would, wouldn’t he? – and three isolated strikers, while Pep Guardiola opts to tiki the taka out of Old Trafford by putting 10 men in the middle of the pitch in a quest for 100% possession and guaranteed control over the transitional periods. 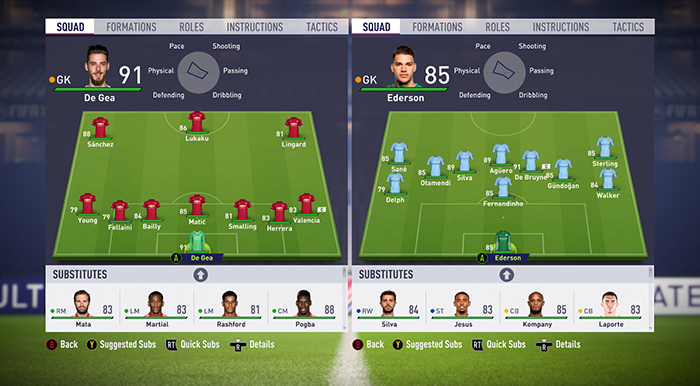 It’s a lot less crazy than you would think.

It all begins with a City attack down on the right, Raheem Sterling and Sergio Agüero weaving past four red shirts but still finding another five in the box. There is simply no space to make things happen, and Kevin De Bruyne’s eventual shot is easily held by David de Gea.

United immediately counter, running behind that incredibly high line, but Jesse Lingard’s excellent run on the wing and enticing low cross is only met by a weak shot by the onrushing Alexis Sánchez.

Lukaku breaks again a few minutes later, only to be stopped by Fernandinho’s heroic trackback. The ensuing City attack is cut out by Fellaini on the other end of the pitch, and it’s Chris Smalling who launches a Scholes-esque 50-yard pass to Lingard.

United’s front three combine excellently to get past the midfield minefield, and the No.14 once again proves his big-game credentials by beating Fabian Delph one-on-one and smashing it past Ederson to put the home team in the lead.

68% of possession: a one-goal deficit. Let’s just say it could be better on both counts for Pep’s men. 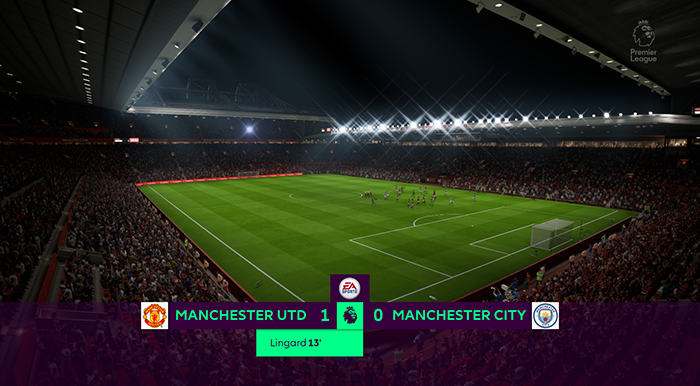 However, City quickly regroup, passing it back and forth for a few minutes before gaining an incredible amount of space on the other side of the pitch.

A brilliant ball puts Agüero through, but his goal is disallowed for offside. How he managed to get behind all those United defenders remains a mystery.

The champions continue to probe the defence, but they just can’t find a good enough shot with so many men at the back. They are also way too susceptible to counter-attacks; while nothing comes of them, it takes set of last-ditch tackles and a Neuer-esque sweeper-keeper move by Ederson to keep the scores close.

David Silva then gets a fantastic chance to equalise in the 32nd minute, but his shot goes past both De Gea and the goal.

Sánchez’s insistence to take a shot instead of passing to Lukaku saves Guardiola’s blushes on the other end. The Belgian would have another chance to run at the keeper, but he also ends up offside. It’s a lot more understandable from United’s perspective. 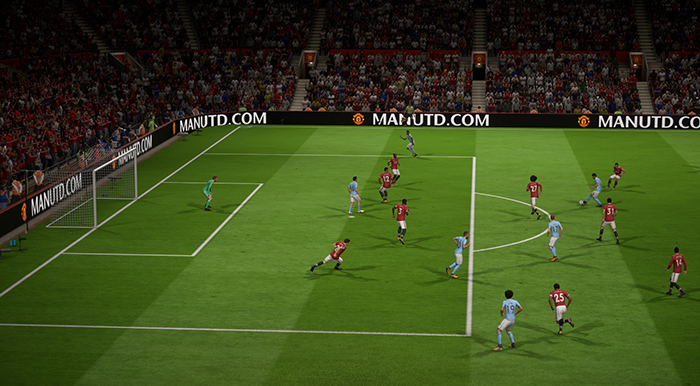 Delph is really starting to struggle against Lingard but just about keeps him at bay for the time being, while Sterling has a golden opportunity at the very end of the half to even up the score, but he slips and De Gea easily collects.

The second half begins with a vicious United attack, one of the first cases where the Red Devils manage to keep possession in their opponents’ half for an extended period of time despite the numerical disadvantage.

It all ends with a long cross by Lukaku, from which Sánchez somehow manages to leap high above Walker, leaving his marker in the dirt, producing an incredible header out of nowhere while standing still. The ball arcs high above the keeper, then quietly drops into the net, and United are 2-0 up with forty minutes to go.

City quickly monopolise the ball for the next ten minutes but still fail to find a way through. Mourinho even dares to bring on Pogba in place of Nemanja Matic after Smalling had deflected a De Bruyne shot out for a corner.

The set-piece comes to nothing, but the champions manage to keep the ball. Unfortunately, David Silva completely misses the target from their next attack. 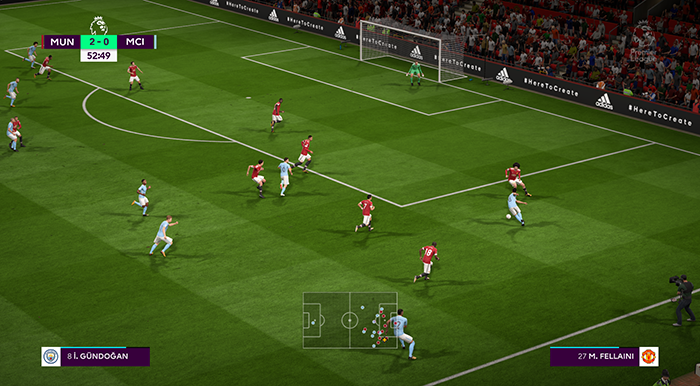 A short lull follows as the teams tussle for possession in the middle of the park. Unsurprisingly, the Citizens come out on top.

Gündogan has a clear sight on target from inside the box but overhits his shot somehow. Then Mourinho makes another sub, introducing Juan Mata in place of Jesse Lingard in the 71st minute.

The sky blue swarm continues to probe with very little penetration to show for their efforts, while United’s breakaways get progressively scarier as they replace Sánchez with Marcus Rashford.

They keep applying more and more pressure. Lukaku is caught offside, but the City players uncharacteristically give the ball away from the free kick, and the Belgian hits the post.

Shockingly, United commit five players to their next foray behind enemy lines. And Ander Herrera’s cheeky backheel presents a golden opportunity to Mata, who quickly makes it three with three minutes to go. 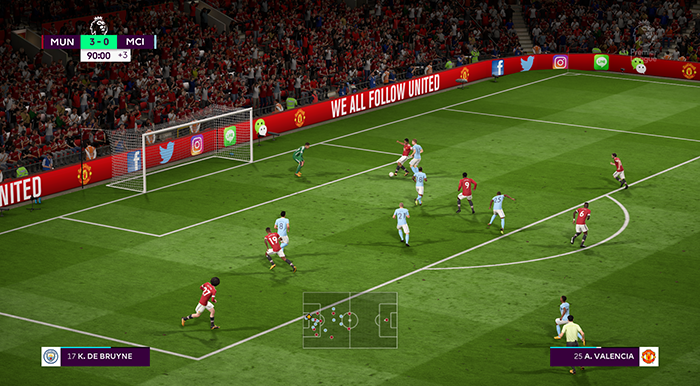 The back seven stands firm as City’s players tire, giving away a free kick near the halfway line. Valencia promptly hoofs it forward, and Rashford beats two only to selflessly pass it back to the onrushing Ecuadorian, who rounds it off with a fourth goal in added time.

It ends 4-0, but it certainly doesn’t tell the whole story: the champions had almost as many clear-cut chances as their pretenders did, but their finishing – and lack of any rearguard – let them down in the end.

Attack wins you games, defence wins you championships, as the saying goes. As it turns out, not having either will simply just lose you the match.