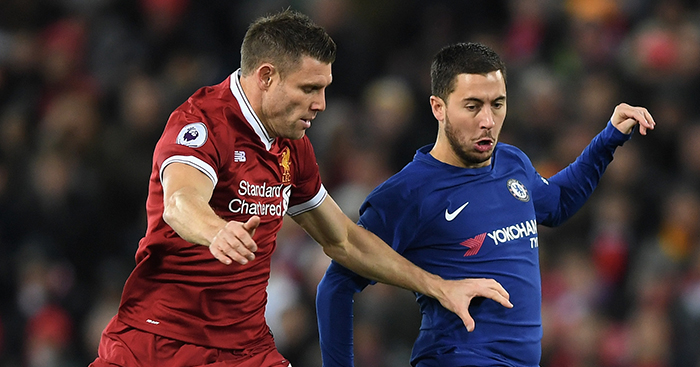 James Milner and Eden Hazard are both exceptional players, model professionals and absolutely crucial to their team. But the Liverpool midfielder and Chelsea forward are very different beasts.

Milner is the ultimate hard-working, no-fuss veteran who’s willing to play wherever his manager needs him, while Hazard is possibly the most talented player in the league but was famously accused by José Mourinho in 2015 of not working hard enough for the team.

If you could sign only one of the players, most would still go for Hazard over Milner, but who would win if players with their respective attributes filled every single position on the pitch? Using FIFA 18, we decided to put a team of 11 Milners against a team of 11 Hazards to find out.

Or at least that was what we tried to do, but nothing’s ever simple with Chelsea. While Liverpool had no issues with accommodating 11 copies of Milner, a combination of my data editing skills and Chelsea’s squad size made it impossible to do the same with the Blues.

In the end, it’s eight Hazards accompanied by three of their youngsters at the back. Hey, at least they get a chance to play for them virtually. 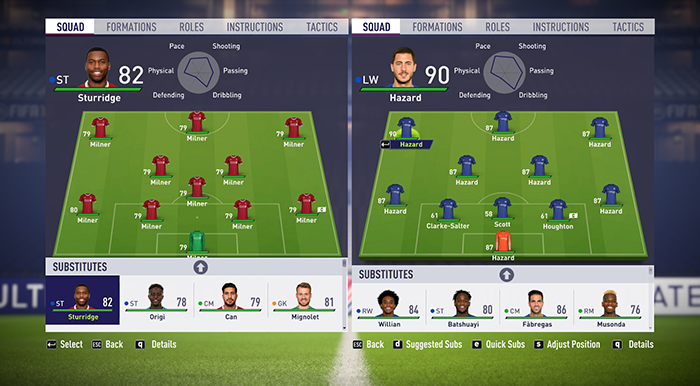 Another interesting quirk of this experiment is that the cloned players consistently got one less overall score than their original counterparts despite having the exact same stats. Perhaps they were penalised for their hideous random-generated faces. It’s safe to say that our cloning machine still needs a bit of work.

With that, the battle between steel and silk is ready to begin, and it’s the Hazards who take the bull by the horns.

Three shots, outrageous dribbling and desperate clearances fill the opening 10 minutes until one of the Hazards puts their team in front with a close-range shot from a tight angle that likely would have been saved by a non-outfield player in goal. 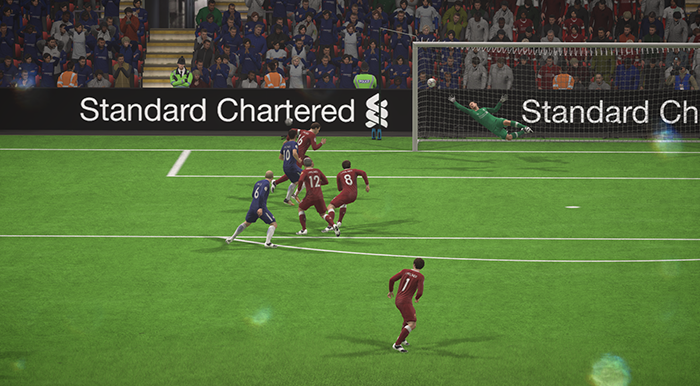 The onslaught continues as the Milners struggle to properly mark their lightning-fast opponents, leaving no less than three players free in their box for an inviting cross nine minutes later, a situation which promptly leads to the second goal to the game.

At this point, it’s hard not to root for the men in red, who struggle to even get out of their own half. It takes them 30 minutes to finally string together a promising set of passes, and they get tantalisingly close to their opponent’s box, but they get easily dispossessed by one of the Hazards on the wing, and the counter-attack almost results in a third.

Still, the Milners fight on – of course – and they manage to create a clear-cut chance six minutes before the interval. Unfortunately, the makeshift striker scoffs his shot and fails to even hit the target. You can’t help but think that Hazard would have scored in the same situation.

But hold that thought. Milner manages to steal the ball after the goal-kick, swiftly passes it to Milner, who finds Milner…and they get one back against the run of play.

A terrifying digital rendition of Jürgen Klopp leaps into the air with joy. It’s a lovely little shot into the bottom left, and suddenly this is no longer a foregone conclusion. The half ends 2-1, and much to my surprise, it’s all to play for in the second period. 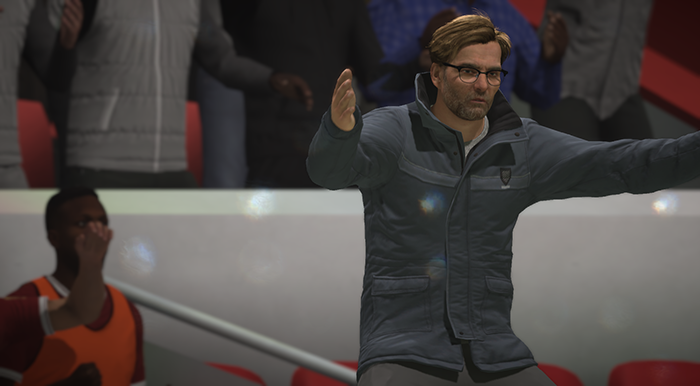 The second half is a lot more even than the first. Perhaps it’s the Milners’ fitness and experience showing as the tired legs are starting to become a factor. In fact, they are the ones who get the next best chance, but once again they fail to test Hazard in goal.

For what it’s worth, the Hazards are doing a surprisingly resolute job in defending, bringing back the entire midfield line to block the Reds’ moves. Maybe they are just looking to hold what they have, but that seems most unlike Hazard.

Frankly, they don’t need to worry considering the Milners’ finishing capabilities. In the 69th minute, one of them breaks into the box, shoots…and it leads to a throw-in for the boys in blue. Faint laughter can be heard from the away end.

Another amusing quirk of the FIFA AI rears its ugly head a little bit later as Klopp’s synthetic counterpart realises after 76 minutes that it might not be the best idea to have Milner in goal. On comes Loris Karius, and we’re definitely not going to make a joke here.

Hazard, incidentally, completes the full ninety in goal at the other end as the game slowly peters out, ending 2-1. 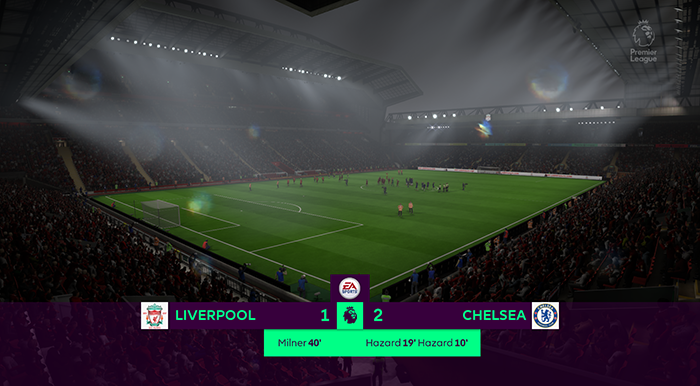 So what are the takeaways from all this? Well, Milner really can do a job anywhere, but, at least according to FIFA, he really can’t be trusted with all his team’s chances.

As for Hazard, he can score from any position – but not even FIFA will let him play at centre-back.