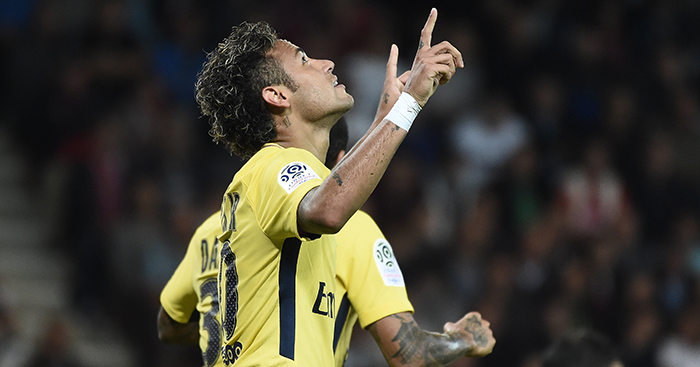 Plenty of people have had something to say about the £198million Paris Saint-Germain paid to sign Neymar from Barcelona, but is it actually that big a deal?

The fee has been described by some as an insult to fans, with Arsene Wenger suggesting it has become “very difficult” to respect Financial Fair Play rules, but PSG owner Nasser Al-Khelaif has told anyone worrying about FFP to “go and have coffee”.

But who is right? Is this transfer really a step too far or is it simply an understandable by-product of the money flowing into the game?

Well, in football as in life, perspective is everything. If £198million sounds like a lot of money, it’s because it is.

But try this number: according to Forbes magazine Manchester United are football’s richest club and are worth £2.48billion – now that is a big number. In fact, for the 2015-16 ﬁnancial year alone (a year without Champions League income) United generated £515million in revenue, another huge number.

Eight European football clubs are valued at over £1billion, and six clubs (including PSG) created revenues in excess of £400million in 2015-16. There’s no austerity in elite football. 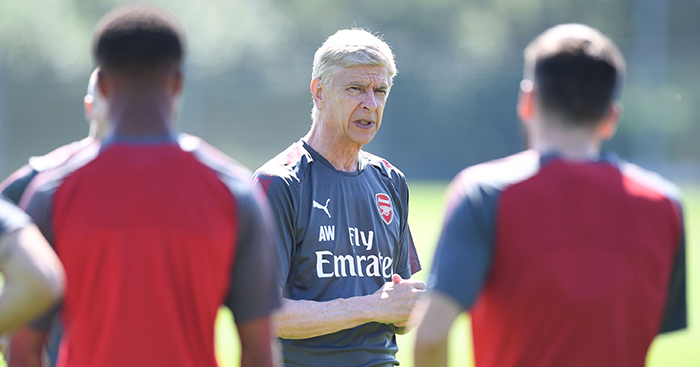 READ: Investigating Arsene Wenger’s claim that more than three signings is too many

To really understand how crazy – or not – the Neymar transfer is, we need to look through the prism of football’s ﬁnances, not our own. It sounds like a ridiculous amount of money, but is it really such a huge sum to an elite football club with global ambitions?

We’ve analysed the last 20 years of finances and world-record fees, from Neymar Jr, Paul Pogba and Cristiano Ronaldo back to the days of Alan Shearer and the Brazilian Ronaldo, to see just what percentage of the top club’s income the world-record signing would have cost at the time.

It turns out a transfer deal of Neymar’s magnitude isn’t entirely new to football, and United star Paul Pogba really was the “bargain” Jose Mourinho claimed him to be.

Alan Shearer’s £15million fee raised Newcastle United’s proﬁle and smashed the British transfer record in 1996, but even with the Manchester United commercial juggernaut in its infancy the deal still represented only 28% of their annual income.

Hernan Crespo’s transfer to Lazio was the ﬁrst to break the 30% of turnover barrier in 2000, and this was soon outdone by Zinedine Zidane’s move to Real Madrid the following year for £46million or 35% of the richest club’s turnover.

That is exactly the same level as the Neymar’s deal so we’ve been here before. Back then transfers settled down for a while until 2009 when the top clubs’ revenues really took off. 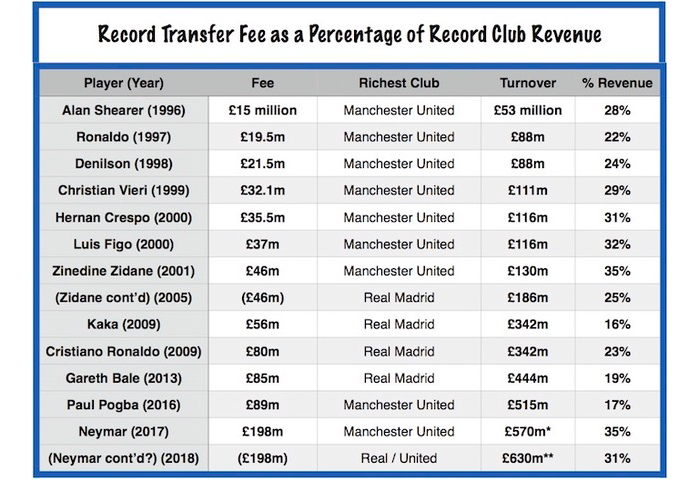 By this measure, some of the world transfer record players have been relative bargains. Cristiano Ronaldo’s £80million fee, for example, is on par with Denilson at 23%.

And maybe Mourinho had an early inkling of our research when he claimed Pogba’s record breaking return to Old Trafford would be seen as cheap with the passage of time, with the Frenchman’s £89million fee equating to just 17% of the club’s annual income in 2016.

The richest club’s revenues more than doubled in the eight years that followed Real’s £46million record signing of Zidane in 2001.

And since Ronaldo’s £80million deal in 2009, their incomes have risen at a remarkable rate and are set to have doubled again by 2019.

Neymar’s transfer returns the ratio between the two markets to the 35% mark of 2001 in something ﬁnanciers would simply call a market correction. 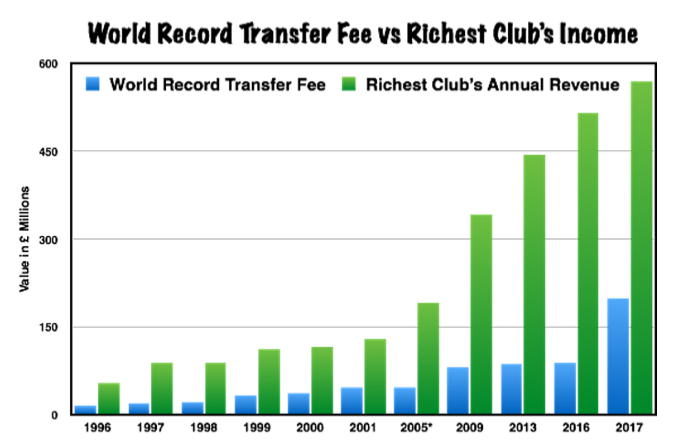 This coming season will see United grow richer still. With £50million extra should Jose Mourinho inspire a run to the quarter-ﬁnals of the Champions League, plus the renewal of expiring sponsorship deals, new noodle partners, increasing TV money, and a successful pre-season tour to America, we can expect United to set a new record in football ﬁnance with a total income estimated by the club at around £630million for the coming ﬁnancial year.

They could buy three new Neymars for that and still have change for a second hand Fellaini.

Such a ﬁgure would reduce the Neymar fee to around 31/32% of turnover, which is the same as Luis Figo’s value when he joined Los Blancos from Barcelona in July 2000.

Only four times has the world record fee actually been paid by the world’s richest club: Real Madrid when they bought Kaka, Ronaldo and Bale, and Manchester United with their acquisition of Pogba.

Madrid also broke the record for Figo and Zidane while trailing in United’s ﬁnancial wake, and the power of the Italian league in the 1990s is shown by Lazio buying Hernan Crespo, and Inter Milan twice breaking the record for Christian Vieri and Ronaldo while AC Milan dominated their domestic scene.

Real Betis split the two Inter records with the surprise £21.5million purchase of Denilson in 1998 as they attempted to split the Real and Barca domestic hegemony. 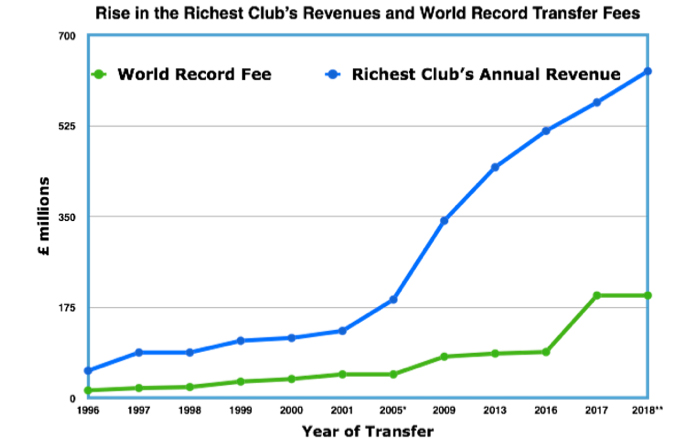 Rather than the richest club distorting the market to their own ends, the periodical leap in fees are more often being made by clubs trying to catch up with those at the very top. Newcastle, Betis, Lazio, Inter, even Real Madrid themselves at times, and now PSG have all done it.

And it’s interesting to note that Real’s often criticised ‘Galactico’ period that included the signings of Figo and Zidane successfully moved the Spanish club ahead of United in the money league regardless of their relative lack of success on the pitch. Maybe somebody in Paris noticed.

Will we have a £250million footballer any time soon? Almost certainly. Most likely within a few years when the top clubs are earning close to £750million a year.

Will people gnash their teeth and complain about the waste of it all? Undoubtedly so. Can we stop it? No. No more than we can stop house prices rising or Hollywood paying actors $50million to play make believe for a few weeks. It is simply a case of supply and demand.

So if the market stays true to form the Neymar record will stand for a couple of years, but it’s nothing more than transfer fees catching up with the super clubs’ runaway ﬁnances. The elite clubs can well afford it.