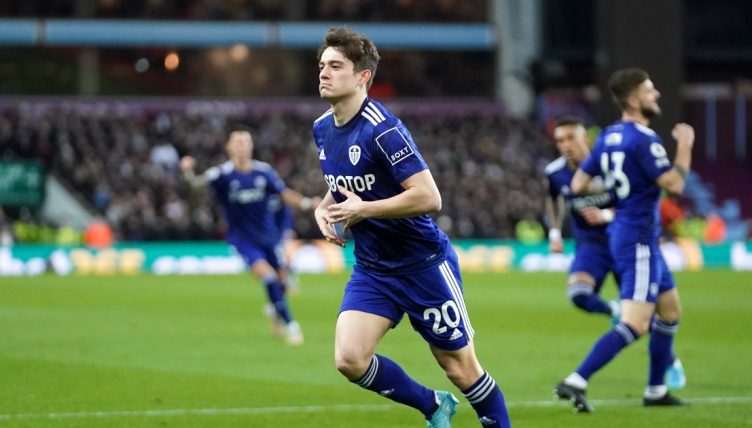 Aston Villa and Leeds United shared six goals between them in an enthralling Premier League match at Villa Park on Wednesday evening – with Dan James stealing the show for the visitors.

James gave Leeds the lead within the first 10 minutes after he stepped inside Ezri Konsa to drill in low across Emi Martinez.

The winger hit the crossbar with another fizzing effort before scrambling home a header from close range in the second half to double his tally.

“I want to score more and get more assists,” James told BT Sport afterwards. “I’ve got to keep pushing and making those runs. We’ve had injuries in the team. It might not be my preferred position but I’m learning every day.

“We always want additions for the squad. The young lads who have played have done well but we obviously want those players back.”

We’ve compiled five amazing stats that underline the impact James had on a riotous evening of entertainment.

– James enjoyed 100% accuracy with his long balls during the match at Villa Park, emphasising the variety of play that has marked Leeds under Marcelo Bielsa.

– The Wales international took four shots, the joint-most of any player on the pitch, and registered 75% accuracy with his efforts on goal – including his two goals.

That is a wonderful finish from Leeds United's Dan James! 💛

The 24-year-old Welshman's third goal of the season takes the wind out of Aston Villa's sails. pic.twitter.com/d4m4XTMuPn

– Of the 10 passes that James attempted, seven were completed. While this may not seem the highest of accuracies, it indicates that the former Manchester United forward was willing to take risks in possession.

– James was a constant menace for the Aston Villa defence, winning two duels and a foul off the flustered Villa backline.

– His two goals means James has scored seven Premier League goals in his career – meaning he’s now overtaken one of the greatest goalscorers of his generation in Andriy Shevchenko (who scored six for Chelsea between 2006 and 2008).