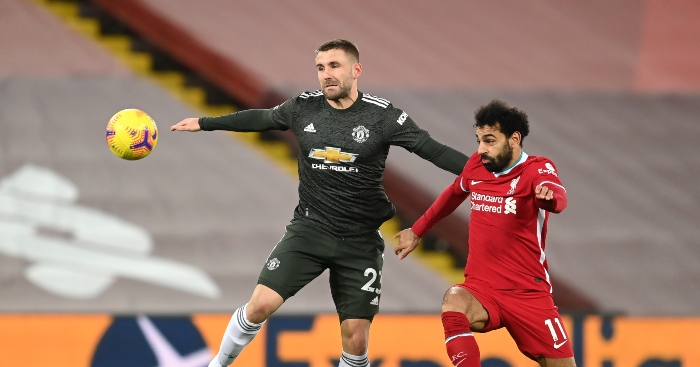 Luke Shaw has had some difficult times as a Manchester United player, but his performance against Liverpool was one the highlights of his time at Old Trafford.

While the ‘Champions vs. Challengers’ encounter may have failed to fulfil the huge hype, Shaw’s display caught the eye among a host of excellent defensive performances.

We’ve collected five stats from the left-back’s Man of the Match display at Anfield.

– Shaw was tasked with keeping both Mo Salah and Sadio Mane quiet at different points of the game and didn’t disappoint, winning 100% of his tackles.

– The England international recovered the ball eight times and made four defensive clearances at Anfield.

– Shaw also impressed with his passing. He completed 100% of his long passes and recorded an 81% passing accuracy during the game.

– The 25-year-old created two chances for his team-mates – including a golden opportunity for Bruno Fernandes, whose shot was saved by Alisson.

– He helped United become the first away team to keep a Premier League clean sheet at Liverpool since October 2018.