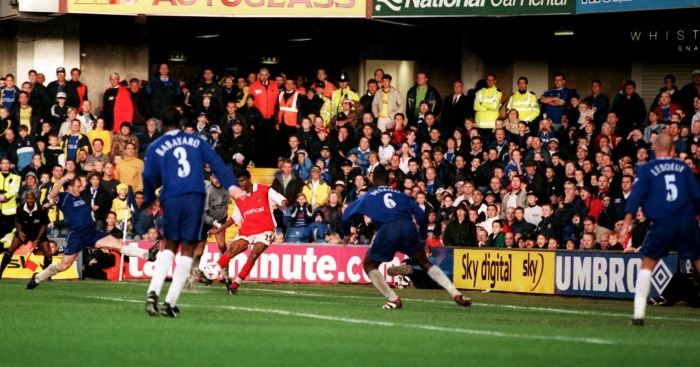 Chelsea and Arsenal have been involved in some fantastic clashes over the years – and we’ve remembered five of the  best from the 1990s.

Looking back, the result was perhaps not such a surprise; Arsenal had not won at Stamford Bridge since 1974 and had just come off the back of beating Leeds in an epic FA Cup third round tie which needed three separate replays to decide an eventual winner.

But Chelsea’s win was much more significant in the grander scheme of the whole campaign. Had Arsenal avoided defeat in west London, George Graham’s men would have completed an Invincible season 13 years prior to Arsene Wenger’s vintage.

As it were, the Gunners were left to rue a sloppy performance from Nigel Winterburn – more on him later – who was at fault for goals from Graham Stuart and Kerry Dixon before Alan Smith pulled a goal back late on.

The highlights are worth watching just for a reminder of how much Stamford Bridge has changed.

Mid-90s bedlam at its absolute best.

John Lukic having an complete shocker on his second debut for Arsenal.

Dennis Bergkamp having a rare off day and appearing ready to explode in rage at the suggestion he might actually be human.

Ian Wright coming off the bench to bravely put Arsenal ahead while getting clattered by Dmitri Kharine.

Dennis Wise, with the tenacity and charm of a snapping turtle on amphetamines, winning a penalty before scoring an injury-time equaliser.

What more could you ask for?

One year on from that chaotic clash at Highbury, Arsenal travelled to Stamford Bridge and managed to secure a victory which would prove crucial as they pipped Manchester United to the title by a single point.

If Winterburn was at fault for Arsenal’s defeat in 1991, the left-back more than atoned for his mistakes six years later.

In another feisty battle in which Ray Parlour clashed with Graeme Le Saux and Wise was lucky to escape a red card for a two-footed lunge on Patrick Vieira, Winterburn was the unlikely hero with a long-range stunner in the 88th minute – one of only seven league goals he scored in almost 700 appearances.

“He played very well, he showed even at his age that he can be strong,” Wenger deadpanned afterwards. He may have been a little more gushing were he to have known the importance of the strike.

Chelsea had been largely written off ahead of the second leg of the League Cup semi-final, trailing 2-1 and having sacked Ruud Gullit just days before the clash.

Despite the upheaval of playing under a new boss, Chelsea dominated proceedings on the night, taking a 3-0 lead thanks to goals from Mark Hughes, Roberto Di Matteo – which you really need to watch below – and Dan Petrescu.

The Blues went on to beat Middlesbrough in the final and also claimed the Cup Winners’ Cup under Vialli.

Mention Chelsea, Arsenal and the 90s and this is probably the match which initially springs to everybody’s mind.

One performance doesn’t make a cult hero, but this will go down as Nwankwo Kanu’s defining performance in England.

Chelsea appeared to be cruising to victory after goals from Tore Andre Flo and Dan Petrescu gave the hosts a two-goal cushion with half an hour to spare, but Kanu had other ideas.

In the final 15 minutes, the Nigerian scored an unforgettable hat-trick, which was voted the greatest treble of the Premier League era in 2016.

“That game, I was flying,” the striker reflected earlier this year. “Everything I did worked. None of my teammates believed I could score from that angle. Even Arsene Wenger said, ‘How did you do that?’

“It was a goal people will live to remember, even me.”