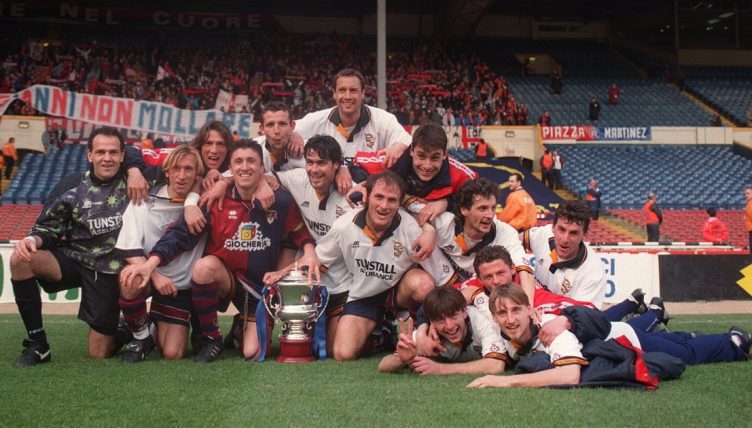 Chelsea, Newcastle and Liverpool are among the clubs able to list trophies which no longer exist among their honours.

Football managers these days often complain about the problems of fixture congestion, with clubs having to juggle the Premier League and European competitions with the FA Cup and League Cup.

The Full Members Cup, more infamously remembered as the Zenith Data Systems Cup, was a competition that ran from 1985 to 1992.

Known as the Simod Cup between 1987 and 1989, it was, as the name suggests, open to the Football League’s full members only, which was the top two tiers. Teams in Divisions Three and Four had to make do with the Associate Members Cup, which is now the EFL Trophy.

The cup was an additional piece of silverware for English clubs to fight over after the post-Heysel European competition ban was put in place.

However, during its inaugural season, the six teams who finished in the European qualification spots instead competed in the English Super Cup (we’ll get to that) while only five other First Division clubs bothered with it.

It grew in popularity, with 41 teams out of a possible 45 contesting its final season before it was killed off by the advent of the Premier League.

Arsenal, Liverpool, Manchester United and Tottenham Hotspur never competed in the Full Members Cup, while Chelsea and Nottingham Forest were the most successful entrants, winning it twice each.

Indeed, Chelsea’s first triumph came courtesy of a thrilling 5-4 Wembley win over Manchester City, which was played on a Sunday after both clubs had played Division One matches the previous day – City drew 2-2 in the Manchester derby at Old Trafford, while Chelsea won 1-0 at Southampton.

Given the shambles that it was during its maiden season, many presumed the Full Members’ Cup would be abandoned, but instead it grew in strength, with Blackburn, Reading and Crystal Palace also adding their names to the desperately short roll of honour. 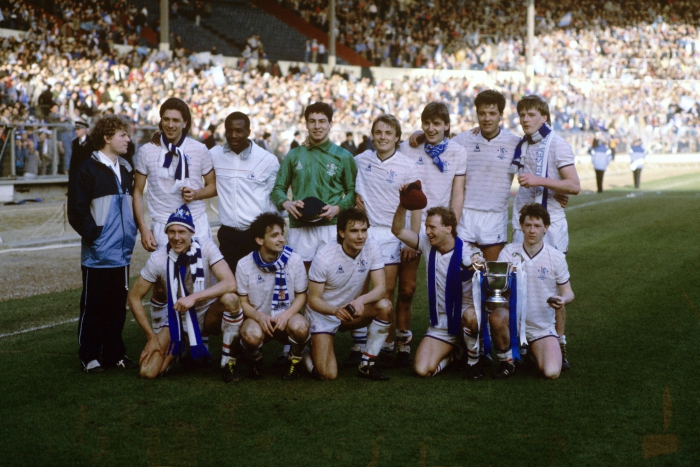 The Full Members Cup at least made it beyond its first season, which is more than can be said for the Screen Sport Super Cup.

The Football League Super Cup was a consolation prize for those who had qualified for European competitions from the 1984-85 season but were deprived of the chance to take on their continental rivals by the ban imposed after the Heysel disaster.

Everton, by virtue of winning Division One, had qualified for the European Cup, while Liverpool, Tottenham and Southampton were due to be joined in the UEFA Cup by Division Two side Norwich, who had won the League Cup.

FA Cup winners Manchester United were set to fight for the UEFA Cup Winners’ Cup, but like the other five, they had to make do with this new trophy, which split the six reluctant entrants into two groups and made them face each other home and away.

After those four games, only two of the six teams would be shed, with United and Saints failing to win a game between them.

The four remaining teams went into two-legged semis, which saw Liverpool and Everton go forward into the final which, again, was a two-legged affair. At least the Full Members Cup promised a day out at Wembley…

Indeed, continuing the farcical nature of the competition, neither Everton nor Liverpool could find time in their already-congested diaries in 1985-86 to schedule the final. It had to be held over to the following season, when Liverpool triumphed 7-2 on aggregate against Everton’s second-string.

The Reds were presented with two trophies, the official Football League silverware and one from the competition’s sponsor.

The second of those pots was rumoured to have been handed by Ian Rush, who scored five goals in the two-legged final, to a ball boy, who was told to put it in his bedroom and keep it. Hardly surprisingly, the tournament was then abolished.

We wouldn’t be surprised if even the ball boy gave it away.

The Anglo-Italian Cup had far greater staying power, with a quarter of a century between its birth and ultimate demise, but it was no less farcical.

The competition came about in 1970 at which time, the winners of the League Cup were awarded a place in the Inter-Cities Fairs Cup.

UEFA, however, did not allow third-tier teams to enter European competitions so after QPR missed out in 1967 and Swindon suffered the same fate two years later, a match between the Robins and the Coppa Italia winners, Roma, was arranged as a consolation.

Swindon triumphed on aggregate and the popularity of what was dubbed the Anglo-Italian League Cup gave rise to the Anglo-Italian Cup. Swindon also won that inaugural competition, which had six English entrants and another half-dozen Italian sides.

The 12 teams were split into three groups consisting of a couple from each country. Two points were awarded for a win, one for a draw and another point per goal scored. In the final, Swindon were declared winners after violence broke out during their final at Napoli, who trailed 3-0 to the Robins at the time.

After four editions of the tournament – the other three being won by Blackpool, Roma and Newcastle – it disappeared before re-emerging as a semi-pro tournament. It remained that way for a decade, with Sutton United being the only English side to lift the trophy during that time before it was discontinued.

The demise of the Full Members Cup following the inception of the Premier League in 1992, however, led to the rebirth of the Anglo-Italian Cup for professional sides.

The 24 second tier (by now renamed the First Division) sides held a preliminary competition which saw eight teams go through to face Italian opposition, with a quartet from each country making up two groups of eight.

Each team played the four sides from the other nation in their group before the two best-ranked teams from each country progressed to the semis. Are you still with us?

One all-English and another all-Italian semi was held to determine who would contest the final. Cremonese beat Derby in the final in 1993, with Notts County being the only English side to triumph in the four years the competition ran before being scrapped in 1996 due to rising instances of violence and disagreements over scheduling between the two leagues. 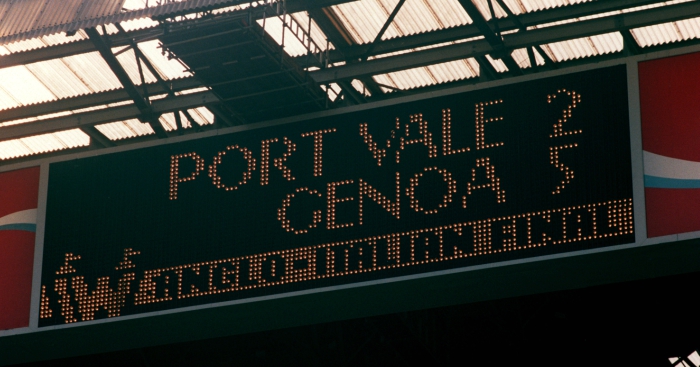 Let’s have a fun fact to start with, shall we? Andrey Arshavin made his senior debut for Zenit Saint Petersburg in a 3-0 win at Bradford City in the Intertoto Cup.

Many remember the Intertoto Cup as having started in the mid-1990s but that is only when the tournament came under UEFA’s control.

The first competition was held in 1961 having been devised as a summer competition and a method to provide the football Pools companies in eastern and central Europe with fixtures during the traditional close season.

After the first six years, scheduling become more difficult, so the knockout stages were abolished meaning the competition had no winner. Instead, the teams who topped the groups won a cash prize.

UEFA took over the tournament in 1995 and sold it as an avenue down which clubs could go to secure back-door entry into the UEFA Cup.

“The Intertoto Cup is perhaps unique in sport as there is no final, no winner and no trophy,” boasted the governing body, as if these quirks were selling points.

English clubs were understandably wary of the competition, preferring their players to spend their summer on a beach somewhere, rather than trekking to a European backwater to kick-off the new season with the old one barely complete.

UEFA initially insisted upon Premier League sides taking up their invitations to compete but, shortly after, softened their stance and allowed clubs to forfeit their places.

From 1996 to 2005, the tournament had effectively three finals, with the winner of each gaining entry into the UEFA Cup. Between 2006 and 2008, 11 teams were ‘winners’, with all qualifying for the UEFA Cup.

The team from those 11 that progressed furthest in the UEFA Cup was named outright winner of the Intertoto Cup – an ‘honour’ Newcastle claimed in 2006.

Michel Platini took over as UEFA president and announced that the tournament would be put out of its misery in 2009. Instead, the UEFA Cup qualifying stages expanded to ensure there was still enough farce to go around in the quiet summer months.

READ: Shola Ameobi, the Intertoto Cup and the phenomenon of false memories

This was the national team equivalent of the Intercontinental Cup, pitting the European champions against their South American counterparts – the Copa America winners.

It is named after the former UEFA president, Artemio Franchi, who held the position for a decade before being killed in a car crash in his native Italy in 1983. The first edition saw Euro ’84 winners France, led by future UEFA president Platini, face Copa America champions Uruguay at the Parc des Princes in a match the hosts won 2-0.

No such game was arranged after Euro ’88 but Euro ’92 victors Denmark travelled to Argentina to face a Copa America ’91 winning team that contained a forward line of Diego Maradona, Gabriel Batistuta and Claudio Caniggia. Argentina triumphed on penalties after a 1-1 draw.