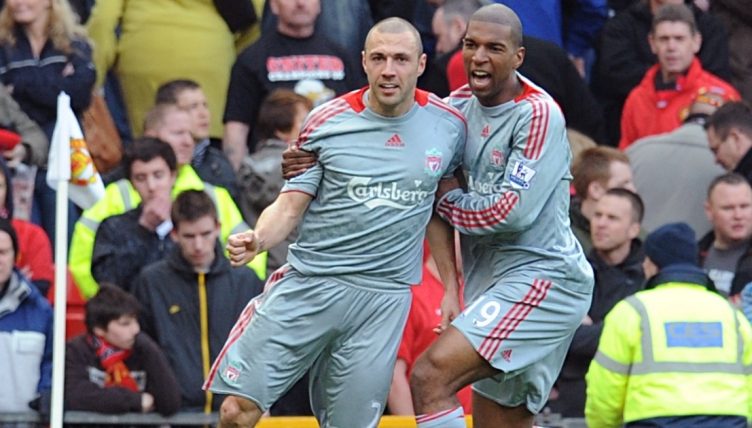 Closely following Steven Gerrard’s success with Rangers, Daniel Agger is set to become the latest Liverpool fan-favourite to enter the world of management.

The former centre-back will take on the role of head-coach with HB Koge in his native Denmark from the start of next season, becoming the 27th former teammate of Gerrard’s to step into the world of full-time, first-team management.

Agger spent eight years at Anfield, racking up over 230 appearances and scoring 14 goals before returning to boyhood club Brondby in 2014.

He joins a long list of ex-Liverpool men to have taken the step into management, one that includes old teammates such as Xabi Alonso, Harry Kewell and Sammi Hyypia.

But what about those more unknown forrays into the dugout? We take a look at five former Reds who you probably forgot went into management…

After spells with Saint-etienne, Lens and Marseille in France, Camara earned his move to England in 1999 with the Reds.

He famously scored a late winner against West Ham on the day he learned of his father’s death, breaking down in tears in front of the Anfield Road stand during his celebration.

Less talked about, however, is the striker’s brief foray into management with the Guinea national team. In June 2009, he took the reins of the side, replacing Robert Nouzaret. There he served as both the team’s manager and technical director for three months.

He was sacked in September of the same year following a run of poor results as well as some quite public disagreements with members of the Guinean Football Federation and high-profile players.

After six years at Anfield, the defender left in 2005 with 135 club appearances to his name.

From there he moved to Celtic, then Wigan and finally returned to Blackburn Rovers, the place he started his journey in British football.

Following his retirement, he was offered a role coaching the under-18s at Ewood Park, a job he kept for a year before becoming the first-team boss of Swiss side FC Bulle, although he only retained the position for one term.

Five years passed with little heard from the former Red until he took on the assistant manager’s position at another side in his home country, Neuchâtel Xamax. After four years aiding first-team boss Michel Decastel, Henchoz stepped into the throne for the remainder of the season after Decastel was sacked.

He then took on the role of FC Sion manager in May 2019 but only remained until September, quitting after a 3-0 loss to St. Gallen. In July 2020, he returned to Xamax for a second spell in charge of the first team.

Some players become club icons because of what they achieved on the pitch for a certain side. For others, it is down to their appearance. During his time at Liverpool, Xavier fell into the latter category.

After spending three years in the Blue half of Liverpool, the Portugal international made the move to Anfield, bringing with him his exceptionally bleached hair and beard.

He made just 21 appearances in two seasons for Gerrard Houllier’s side but, thanks to his distinctive look, remains a popular figure.

Following his retirement with LA Galaxy in 2008, however, Xavier’s managerial career began. Between 2013 and 2015, he took on three roles in Portugal’s lower tiers with Olhanense, Farense and Desportivo Aves, before moving to his place of birth, Mozambique in 2016, to take over the running of the country’s national side, a role in which he remained until 2019.

Babb became the most expensive defender in Britain when he moved to Anfield in 1994 for £3.6million, helping the Reds to a League Cup victory in his first season.

He also famously injured his coccyx when his legs slid either side of a goalpost against Chelsea in 1998, becoming one of the Premier League’s most viewed bloopers in the years to follow.

Spells with Sporting Lisbon and Sunderland followed after leaving Merseyside, and he eventually retired in 2004.

However, nine years after hanging up his boots, Babb finally took the step into the dugout, managing Conference South side Hayes and Yeading for two seasons between 2013 and 2015.

His spell coincided with the teams return to West London after spending two years in Woking, and it remains the only managerial job on his CV.

Phil Babb with possibly the post painful moment of the 90s… pic.twitter.com/csJQeQGhaM

The Italian former left-back, who only made 29 appearances for Liverpool, briefly enjoyed an unlikely week as a Kop cult hero back in March 2009.

His goals in the thrashings of Manchester United and Real Madrid in quick succession were undoubtedly the peak of a career that also included stints with Udinese, Napoli, Torino, Sunderland and Leyton Orient before seeing out the final years of his playing career in the lower leagues of Italian football.

In November 2019, two years after retiring, he returned to the game as coach of Serie D club Crema. He remains in charge today, with the club currently sitting third in the Italian fourth-tier.

Speaking to the Guardian, however, he admitted he still has dreams of one day returning to Anfield as manager. Dream big, Andrea!