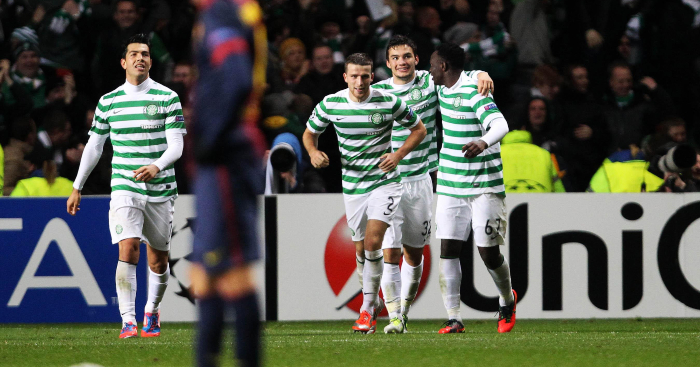 A hot topic has once again reared its head, with Liverpool boss Jurgen Klopp and Manchester City manager Pep Guardiola its loudest cheerleaders.

Following last weekend’s 1-1 draw between Liverpool and City, both managers called for the Premier League to reconsider its stance on allowing more than three substitutions to be made per game, which had been allowed during football’s restart over the summer.

But what if five subs had always been the norm? Here, we take a look at some classic matches that could have ended very differently were an extra two reinforcements allowed.

This was a match of destiny for a young Cristiano Ronaldo. Sure, Greece had beaten Portugal 2-1 during the opening match of Euro 2004, but the hosts would triumph in the final to claim a first major international trophy.

Except they didn’t. A resolute Greece side instead caused one of the great upsets of international football. A header from Angelos Charisteas just before the hour won it for the 80-1 outsiders. Cue jubilant scenes and many jubilant neutrals watching at home.

That night, we saw Portugal introduce Paulo Ferreira, Rui Costa and Nuno Gomes from the bench. Two more subs could have seen the likes of Simao, Helder Postiga, Tiago or Petit enter the fray and deny us Ronaldo’s post-match tears. Scenes that absolutely none of us enjoyed seeing…

READ: Yearning for the Wayne Rooney we all fell in love with at Euro 2004

There are no doubt countless football fans who would happily wipe every Mourinho touchline dash from their memory.  But there is no denying the iconic nature of his crossfield sprint after Inter Milan knocked Barcelona out of the Champions League in 2010.

Heading to the Camp Nou with a 3-1 win to their name, Mourinho and his troops knew that a 1-0 defeat would see them through to a Bernabeu final.

Holding out at 0-0 for much of the game, a late Gerard Pique goal cued whatever the Italian is for squeaky bum time. Pep Guardiola had already introduced Maxwell, Jeffren and Bojan. Incredibly, Thierry Henry remained on the bench.

His introduction could easily have denied some top-tier Mourinho antics, which would have definitely been a bad thing.

Ivory Coast were big favourites heading into the 2012 edition of the African Cup of Nations – and it was easy to see why.

Their starting line-up in the final against Zambia possessed some rather menacing figures. Didier Drogba, Yaya Toure and Kolo Toure stood alongside the likes of Gervinho, Solomon Kalou and Didier Zakora. Surely this was their time.

Three subs were used by Francois Zahoui that day too, with Didier Ya Konan, Wilfried Bony and Max Gradel entering the fray.

But it was to be the relative minnows of Zambia who came away victorious, winning a hectic penalty shootout 8-7.

Unused on the Ivory Coast bench that day were the likes of Seydou Doumbia and Emmanuel Eboue. Granted, they would not have scored the penalty missed by Drogba just after the hour, but they could well have tipped the balance enough to deny Zambia, and the watching world, this glorious upset.

A night that is definitely one of Rod Stewart’s all-time favourites.

The rock icon was reduced to tears at full-time in 2012 as Neil Lennon’s men beat what many argue to be the best footballing side of all time – Guardiola’s 2012 Barcelona unit.

A front three of Lionel Messi, Alexis Sanchez and Pedro, backed up by a midfield trio of Xavi Andres Iniesta and, erm, Alex Song, was undone by Victor Wanyama and Tony Watt. Exquisite stuff.

David Villa, Cesc Fabregas, and Gerard Pique all emerged from the Barca bench that day but could not spoil one of the great Champions League nights.

But who knows? Maybe if the fresh legs of Christian Tello, Jonathan dos Santos or Martin Montoya had been allowed on the field, it may never have happened, and we would have never seen an overjoyed Rod.

It has been somewhat forgotten about by the wider footballing community, but Bradford City’s run to the 2013 League Cup final is always worth remembering.

On the road to Wembley, Phil Parkinson’s League Two outfit saw off Watford, Wigan and Aston Villa, but their quarter-final clash against Arsenal that sticks in the memory most.

Tomas Rosicky, Alex Oxlade-Chamberlain and Marouane Chamakh all emerged from the bench for the Gunners that night, but perhaps they were just a Mikel Arteta short of a win. The Spaniard may have at least taken a better penalty than Cazorla, Chamakh or Vermaelen, who all missed in the shoot-out.

But which non-Arsenal fans among us would want that? It would have made this excellent American commentary far less enjoyable.