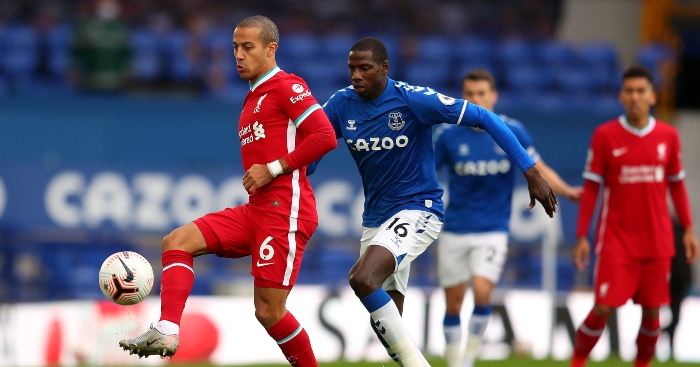 It may have been overshadowed by the general chaos caused by VAR, but the Merseyside derby saw Thiago Alacantra make his first Premier League start for Liverpool.

After missing their last three games through illness, Thiago impressed against Everton and showed why he is regarded as one of the best midfielders in the world.

Here, we’ve collected some stats that demonstrate his invaluable contribution during the 2-2 draw.

– The Spain international had 93 touches and completed 70 passes during the match, the most of any player on the pitch.

– Thiago helped control the game by retaining possession in the middle of the park, recording a 92% passing accuracy rate.

– He created two key chances at Goodison Park, one with a non-look pass that almost led to a late winner.

But the no-look pass from Thiago to Mané deserved some love 👏 pic.twitter.com/b1kQaf4E9Q

– He also took the game to his opponents, completing all four of his attempted dribbles – the most on either side.

– Thiago was also influential when Liverpool were not in possession. He made seven ball recoveries, two interceptions and won two tackles during the game.

Ranking every player to wear No.6 for Liverpool in the Premier League era