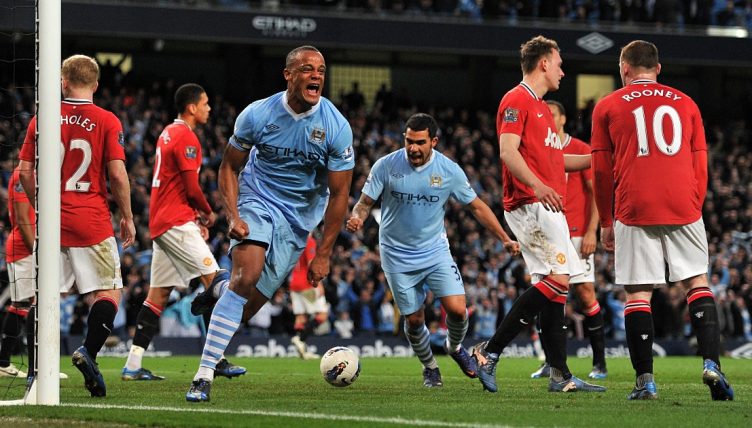 During the Sheikh Mansour era, Manchester City have transformed from noisy neighbours to a respected side expected to challenge for the title at the very least.

Meanwhile, Manchester United have been on a decline, especially since Sir Alex Ferguson’s retirement. This has seen a massive shift in the Manchester derby’s dynamic, and City have had some incredibly impressive results against their city rivals.

So, we took a look at five of City’s best wins against United since Sheikh Mansour took over the club.

A 6-1 victory started off with Mario Balotelli’s “Why always me?” celebration. There was absolutely no way this wasn’t making the list.

City completely humiliated the Red Devils at Old Trafford, showing that they were more than just noisy neighbours, and that the blue side of Manchester was serious about winning the title.

There have been games with larger margins left out of this list purely because of the pressure around the match and how big a result it was.

Vincent Kompany had so many incredible moments in a City shirt, but heading that ball past David de Gea has to be one of the best.

The win that laid the foundations for “AGUEROOOOOOOOOO”.

The Red Devils couldn’t lay a glove on City that day, and it was 4-0 to Manuel Pellegrini’s side within 50 minutes, with Sergio Aguero at his most lethal. The Argentinian has since become the top scorer in this fixture, joint with Wayne Rooney on eight goals.

Rooney actually scored an excellent free-kick in the 87th minute, but it came nowhere near taking the shine off City’s swashbuckling performance.

Edin Dzeko had a knack of making goalscoring look so incredibly simple, and that is exactly what the Bosnia & Herzegovina international did on the day.

Yaya Toure rounded off the scoring to give a greater indication of the difference in quality the two teams showed as Pellegrini’s City completed the league double over United. Six vital points in winning the title that season.

Under Pep Guardiola, there have been so many times where Man City have made football look far too easy. This was one of those times.

They cut through United in a way that looked so effortless, before taking their foot off the gas towards the end and conceding a goal that gave United a glimmer of hope that they could reach the EFL Cup final.

City lost the second leg 1-0, but still got through thanks to just how dominant they had been in the first, eventually going on to beat Aston Villa 2-1 in the final.