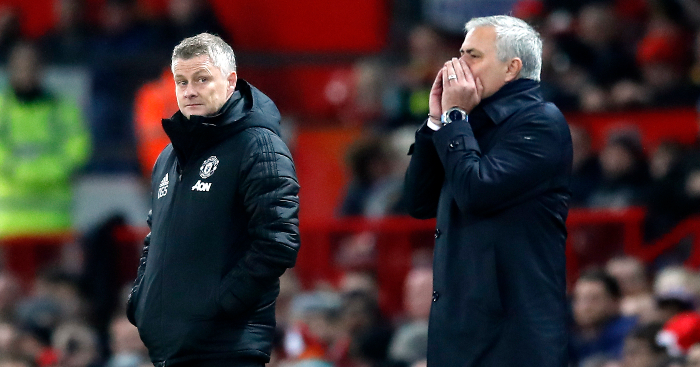 Tottenham manager Jose Mourinho isn’t one to mince his words or hold back on what he really thinks.

The fiery Portuguese coach is now into his third decade as a football manager, representing seven clubs across eight stints – three of which have been in the Premier League.

Having now been around the block, there’s the added spice of the 57-year-old two-time Champions League winner regularly coming back up against his former clubs. Here are five of the most memorably salty encounters.

There’s evidently a lot of warmth and mutual respect between Jose Mourinho and Frank Lampard, with the pair so successful together during the Portuguese’s first stint at Stamford Bridge between 2004 and 2007.

But you wouldn’t have known it from their touchline squabbles when Mourinho’s Spurs faced Chelsea in the League Cup.

“F*cking hell Frank, when you’re losing 3-0 you’re not standing up here,” Mourinho said, referring to Lampard’s Blues going three goals down to newly-promoted West Brom at the weekend prior.

By the end, things seemed amiable once again between the two of them, but Mourinho couldn’t resist a backhanded compliment after the match.

“We need to be there when they are losing and the last match when they were losing 3-0 I felt sorry for him because he was really sad and quiet in his chair,” Mourinho explained after Spurs came out on top in the penalty shootout.

“In terms of football, I have nothing to teach him. He knows football up and down and is a fantastic coach.

Old friends Jose Mourinho and Frank Lampard exchanged words on the touchline during the first half at the Tottenham Hotspur Stadium.pic.twitter.com/dNJXJ5lLD0

Mourinho was under pressure after Manchester United’s poor start to the 2018-19 season, with three defeats and just four wins from their first eight Premier League outings.

They looked to be getting back on track and heading for a 2-1 win over Chelsea at Stamford Bridge in October, but then Ross Barkley struck an equaliser in the last few minutes of injury time.

Mourinho looked perfectly calm in the away dugout, but his rage levels went from one to a hundred in just a second after he perceived Maurizio Sarri’s assistant Marco Ianni to be celebrating a little too pointedly in his direction.

He sprang out of his seat and chased down the assistant, remonstrating with the Chelsea staff as he did so.

He may be a legend at Stamford Bridge, but that didn’t stop a section of Chelsea’s support sticking the boot in when he returned with Manchester United, especially during a feisty FA Cup quarter-final back in 2017, when Antonio Conte’s Blues beat his side 1-0.

A selection of chants on that occasion included: “F**k off Mourinho”, “It’s all your fault” and “You’re not special any more” as well as cries of “Judas”.

Mourinho’s response, as ever, was to remind them of the success he’d enjoyed at their club, holding up three fingers in reference to the three Premier League titles he’d delivered across two stints there.

“They can call me what they want,” he said afterwards.

“I am a professional. I defend my club. Until the moment they have a manager that wins four Premier Leagues for them, I’m the No. 1.

“When they have somebody who wins four Premier Leagues for them, I’ll be No. 2. For this moment, ‘Judas’ is No. 1.”

Jose responds to chants of "f**k off Mourinho" from the Chelsea fans with three fingers. #SpecialOne #CHEMUN #mufc pic.twitter.com/tLBNqVoS3Y

Mourinho is heralded as a legend at Porto for delivering a miraculous treble back in 2004, leaving on a high after it was impossible to take the club to further heights when he left for Roman Abramovich’s newly-minted Chelsea that summer.

Fate conspired for the coach to reunite with his old flame just a few months after his departure, as Chelsea were drawn against the reigning European champions in the Champions League group stage.

Chelsea won 3-1 at Stamford Bridge (before losing 2-1 in Portugal), and while most of Porto’s travelling support gave him a positive reception, one fan couldn’t forgive him for leaving – and spat at him before kick-off.

“I expect that,” Mourinho said afterwards.

“I can understand that. Some people love me, other people don’t love me so much. That’s football. That’s life.”

In his first stint as manager, Mourinho had impressed as a 37-year-old up-and-comer at Benfica, but political machinations behind the scenes saw him walk out after just a few months.

“Me and [assistant Carlos] Mozer thought that the only way to end speculation and the constant threat of being sacked in the event of a bad result was renewing our contracts for another season,” he said in a press conference.

“President Vilarinho thought it was better not to accept our request. We understood that decision showed a lack of trust in our work.”

After a short-lived spell at smaller side União de Leiria, he was appointed Porto manager in January 2002 and faced their hated rivals, his old club, within a month.

He demonstrated what a mistake they’d made in letting him go when he provided a hint of the domestic dominance that was to come by leading Porto to a 3-2 victory at the old Estadio das Antas.