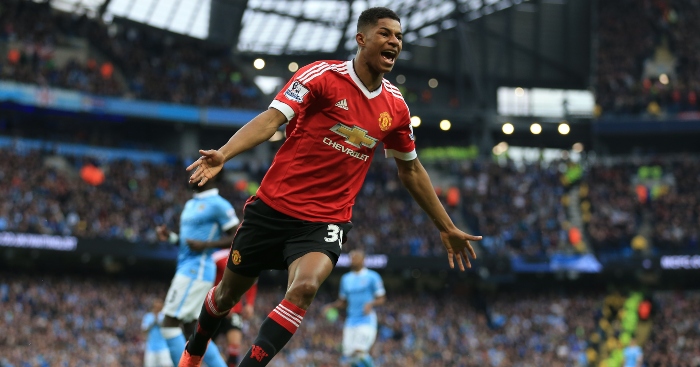 Manchester United coming up against Manchester City is always a fixture to look forward to, especially since the improvements made in the blue half of the city over the years.

The Red Devils haven’t always had things their own way since Sir Alex Ferguson retired, having not finished above their city rivals since their 2013 title win, but there have been some truly special wins.

Ahead of the latest match between the two sides, we took a look at five of United’s best performances in the derby since Ferguson retired.

It was an absolute masterclass from Ashley Young that won United their first Manchester derby since Ferguson’s retirement.

Young’s time at United is probably better known for the moment where a bird shat in his mouth (Young has since denied it happened), but he was the one dropping pinpoint deliveries that day.

He scored the first goal of the game before assisting the second and fourth of United’s goals to secure their first win at the fourth attempt after Ferguson’s departure.

Over the years, we’ve got fairly used to Marcus Rashford being incredibly good at football.

However, when he first burst into our consciousness, it was unbelievable that this youngster had come out of nowhere to beat Premier League defences with such ease.

The teenager was playing in his first Manchester derby and he only went and scored the only goal of the game to keep the Red Devils in with a chance of reaching the Champions League spots.

A match-winner in Rashford’s first Manchester derby to go with the goals he scored on his United debut, his England debut, his Champions League debut and his Premier League debut. Siri, play Pulp’s ‘Do You Remember The First Time?’

Things looked pretty bleak for United when Pep Guardiola’s side went 2-0 up within half an hour of the game as they looked to be closing in on sealing the title in the sweetest of ways.

Paul Pogba was unstoppable in the second half though, bagging a brace, before Chris Smalling popped up to score the winner.

David de Gea had his own moment of glory too, pulling off a brilliant save to stop Sergio Aguero scoring an equaliser.

On this day in 2018: A sensational second-half comeback at the Etihad inspired by Paul Pogba to beat Manchester City 3-2 and deny them the chance to win the league against us 🙌 pic.twitter.com/nOUikHmLnb

United almost let City back into the game as they dropped off, but their attacking play was simply sensational.

City’s defence couldn’t handle the Red Devils’ front four, and Rashford and Anthony Martial both managed to get on the scoresheet.

Rashford could have easily had two more, as the England international missed the target from one chance before hitting the crossbar, but Ole Gunnar Solskjaer’s side were able to get all three points.

This is arguably the best of the lot in terms of Solskjaer’s wins, another counter-attacking masterclass at The Etihad. Guardiola’s men had pulled away and were well on their way to another title, but the Red Devils got derby bragging rights thanks to goals early in each half from Bruno Fernandes and Luke Shaw.

Solskjaer’s men ended up finishing the 2020-21 campaign unbeaten away from home, with this as good an example as any of their potency on the road.