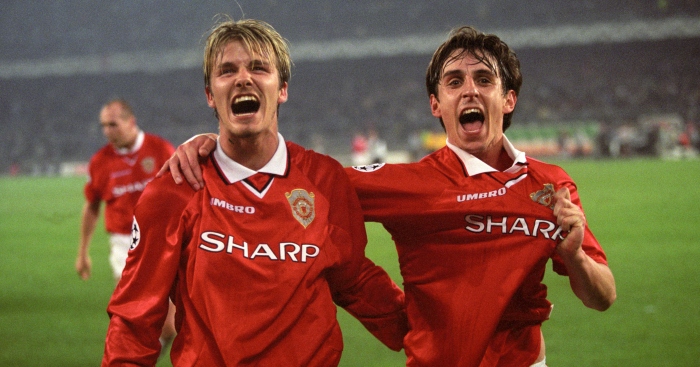 Manchester United have form for big Old Trafford performances in the Champions League, but they have also produced the goods away from home when required.

You don’t get to three finals in four years by being poor travellers, but some of the club’s best performances on the road have come in those seasons where they didn’t go all the way.

We’ve taken a look back at five of United’s finest away performances in Europe’s premier club competition.

The pinnacle of Manchester United away performances was also the ultimate comeback… for all of a few weeks, until it was superseded against Bayern Munich in Barcelona.

Ryan Giggs had kept United in the tie with a late equaliser at home to Juve, but two early goals from Pippo Inzaghi in Turin might have tempted a few fans at home to turn off their television. Then after Roy Keane brought his team back into the game, the Irishman picked up a yellow card which would rule him out of the final.

United remained undeterred, though, and Dwight Yorke put his team ahead on away goals before the break. The game still hung in the balance entering the last few minutes, but Andy Cole’s late effort put the result beyond doubt.

United’s next win at the Delle Alpi was far more comprehensive, and as such felt even more impressive.

Juve had cruised through the first group stage, winning their three home games without even conceding a goal, and a 4-0 demolition of Basel made it four from four, but United brushed them aside with one two goals from Giggs and one from Ruud van Nistelrooy.

It mattered not, though – United were eliminated by Real Madrid in the following round, while Juve went all the way to the final before losing on penalties to AC Milan.

The run to the 2009 final featured a couple of big away performances – Cristiano Ronaldo’s long-range stunner to see off Porto was the appetiser, but a 3-1 victory at the Emirates Stadium was undoubtedly the main course.

It was a classic example of Sir Alex Ferguson getting one over on Arsène Wenger: after a 1-0 win at Old Trafford, the game should have been in the balance, but within 15 minutes it was all over.

Early goals from Park Ji-sung and Ronaldo put United in the clear, with the Portuguese adding another after half-time, and the only blot came when Darren Fletcher conceded a late penalty and picked up a red card to keep him out of the final.

United’s most important victory over Chelsea in the Champions League came in Moscow in the 2008 final, but Ferguson’s team was able to stick the needle in again three years later.

United had only squeaked past Marseille in the last 16, while Chelsea were the reigning Premier League champions and had come from behind to beat their Premier League rivals at Stamford Bridge just a month earlier.

The 2008 European champions were particularly miserly in Europe that season, though, conceding just four goals in 12 games en route to the final. Wayne Rooney opened the scoring in west London, and the defence did the rest.

United’s biggest European away win didn’t come under Ferguson, or even under José Mourinho, but instead under David Moyes.

The Scot had taken charge of a 4-2 victory over Bayer Leverkusen in his first group stage game in charge, but the Manchester club weren’t entirely out of the woods by the time they travelled to Germany for the reverse fixture.

Half an hour in, though, and the job was more or less done. By full-time, five different goalscorers (including an own goal) had helped put Sami Hyypiä’s team to the sword.

Sadly for Moyes, that wasn’t the start of a beautiful long tenure at Old Trafford but rather as good as it got.