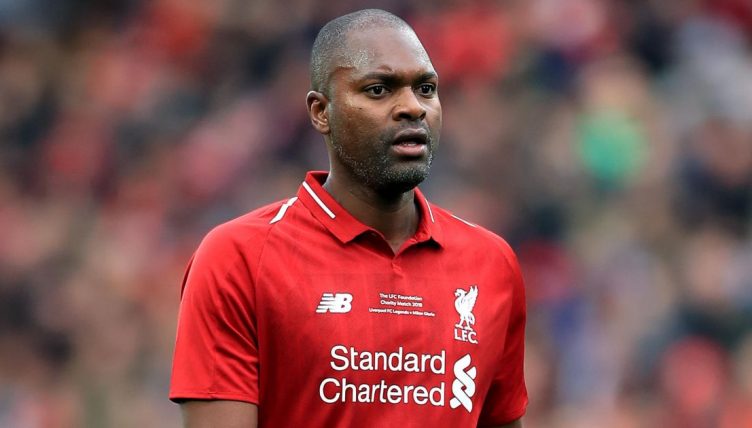 There are fewer sweeter sights in football than an old icon rolling back the years in front of adoring fans while the transfer flop adored by nobody pretends all the glory is for him.

We’ve taken a look at seven excellent examples of players which have supporters have tried to forget appearing alongside heroes of their respective clubs.

It’s fairly uncontroversial to suggest Manchester United against Liverpool is the biggest fixture in English football. So when the two clubs faced off in a game billed as the ‘Legends of the North match’ in May 2022, there were some grandiose names on the team sheets.

The Frenchman played just 17 league games for Liverpool after signing as a youngster in 2001. He also went out on five loans during his spell as a Red, most notably to Sunderland, where he was part of a side that achieved a then-record low Premier League points total and were relegated dead last.

To be fair to Le Tallec, he wasn’t the only non-legend playing in the game. Bjorn Tore Kvarme and Andriy Voronin were also on the park. To be unfair to Anthony Le Tallec, we still chose to lead with him.

Vincent Kompany’s testimonial provided a curious Manchester City Legends side, comprising of obvious greats from the club’s most successful period and cult heroes from the years prior to them becoming a superclub.

Wright, however, falls into neither category. The goalkeeper was technically there between 2012 and 2016 – never forget he joined shortly only months after leaving Preston due to homesickness FFS – but he never actually played for the club.

Just minutes after actually getting on to the pitch for a City side on Kompany’s big night, Wright was picking the ball out of the net having conceded to Robin van Persie.

Wait is this Richard Wright's FIRST game for City 😂😂😂😂

In the summer of 2002, Liverpool had just finished second in the Premier League, and Manchester United – with Sir Alex Ferguson’s future in doubt – were there for the taking.

A good transfer window could have reshaped English football, but instead they signed El-Hadji Diouf, Bruno Cheyrou and Salif Diao.

Diao was part of the cult Senegal side which stormed the 2002 World Cup – scoring a brilliant goal against Denmark in the process – but, as Alex Hess wrote, he “was an honest trier but woefully out of his depth, a possession-sieve who functioned mainly as a handbrake on a team that were best playing at speed”.

Liverpool slumped to fifth in 2002-03, and the midfielder went on to make 37 league appearances in three years at Anfield.

Still, that didn’t stop him appearing for Liverpool legends against the likes of Kaka, Andrea Pirlo and Cafu in a 3-2 thriller against AC Milan in March 2019.

Hard to say who the best player in this photo is. For me it's between Maldini, Gerrard and Salif Diao.. https://t.co/WnlA4UKQj5

Keeping a clean sheet against a Real Madrid legends side with Raul and Fernando Morientes leading the line may actually be Cygan’s best display in an Arsenal shirt.

Sadly, he had to rely on the equally ignominious names of Luis Boa Morte and Jeremie Aliadiere to front Arsenal’s attack, and the game ended 0-0.

The goalkeeper only played eight times for Manchester United, one of which was the embarrassing 3-0 League Cup defeat to York City in 1995, and most Red Devils supporters would probably have been less surprised to see Karl Pilkington between the sticks when they faced a Celtic and Republic of Ireland XI in 2018.

Reminds me of Kevin Pilkington. A man who refused to dive to save shots.

One season and 18 league appearances were enough for Granville to get a call to play for Chelsea legends against Inter in 2018, meaning it would probably have been more fitting for Asier Del Horno to play left-back.

Coincidentally, those exact statistics were enough for Mikael Silvestre to get the nod for Inter in the same match.

Still, Dehu would have killed for stats like those of Granville and Silvestre at their respective clubs, having appeared for Barcelona legends against Manchester United in 2017 with 11 league appearances for the actual club to his name before being released by Louis van Gaal after a solitary season.

Although even the defender must have sniggered when he found himself coming up against Danny Webber in the Red Devils side.