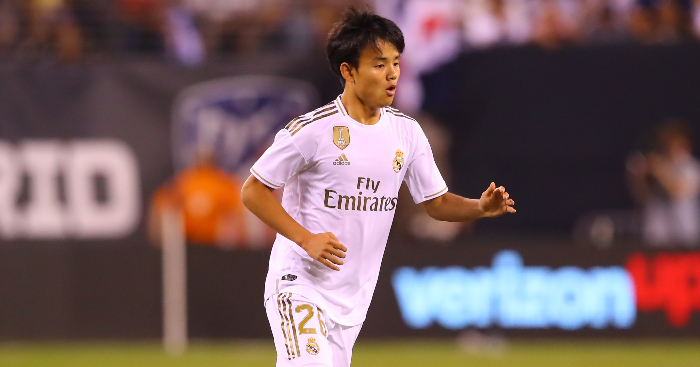 Real Madrid‘s pre-season tours are all about showing off their shiny new galactico signings and allowing overseas fans a chance to watch their favourite stars.

That’s certainly been the case with Eden Hazard getting his first minutes in the famous white kit, while the likes of Luka Modric and Sergio Ramos have flown out for the International Champions Cup.

But Zinedine Zidane has also used it to give opportunities to Madrid’s next crop of emerging talent. The tour hasn’t exactly gone to plan so far, losing 3-1 to Bayern and 7-3 to Atletico and drawing 2-2 with Arsenal, but plenty of their youngsters have emerged with credit. Here are five that have caught the eye so far.

Andres Iniesta is a fan of the young Japan international, who recently joined Madrid despite spending some of his teenage years developing his talent at Barcelona’s La Masia.

The star, who recently turned 18, has been described as the “Japenese Messi” and has shown some dazzling moments of skill during pre-season.

“We’re talking about a player with immense talent and a great future ahead of him,” said Iniesta. “He is one of the most gifted players in the world right now and I’m not surprised he’s with a big club.”

One of the few players to come out of Madrid’s disastrous 2018-19 season looking good, it’s safe to say that the young Brazilian is already well on his way to becoming a superstar, if he’s not one already.

He suffered torn calf ligaments as his side were dumped out of the Champions League by Ajax, seeing his season cut short. But he’s recovered and has shown the moments of quality you’d expect in pre-season, a really positive presence that’s always looking to get the ball towards goal.

Coming on for Marco Asensio against Arsenal, the unfortunate cruciate ligament injury suffered by the Spaniard could provide him with even more first-team opportunities next season. It’s easy to forget he’s still just 19.

It was Madrid’s senior side, featuring the likes of Hazard, Ramos, Marcelo and Thibaut Courtois that were humiliated by their city rivals Atletico in New Jersey, 6-0 down after 50 minutes.

It was only after Zidane changed everything midway through the second half that the youngsters helped spare Madrid’s blushes a little, reducing the gap to four goals as it finished 7-3. The defender helped steady things up at the back and scored his team’s third with a late tap-in.

The Castilla captain, who enjoyed a strong 2018-19 campaign in the youth set-up, could well be ready for La Liga – although a transfer or loan elsewhere might be best for him.

An ever-present for Castilla last season, he was rewarded with his first-team debut at the Santiago Bernabeu last season and could well be ready to graduate, or at least get a taste of top-level football on loan elsewhere.

The playmaker put in a very strong performance against Arsenal, looking like he has a good understanding of space in the centre of the pitch.

The 18-year-old Brazilian forward, joined this summer from Santos, is hoping to be the future of Madrid’s attack, alongside his compatriot Vinicius.

He’s had limited opportunities so far, but he scored an absolute stunner of a free-kick on his debut against Bayern Munich to give fans a taste of what to expect.