Six times Ronaldo has thrown a strop after being substituted 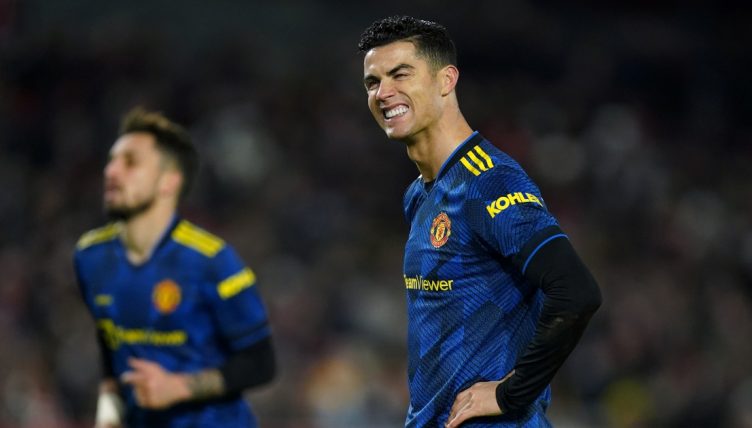 Cristiano Ronaldo’s determination and will to work makes him one of the best footballers in the world – but it can also lead to him getting frustrated at times.

Since establishing himself as one of the world’s best during his first spell with Manchester United, Ronaldo has been used to being the key man in the team.

It has made Ronaldo being substituted one of the rarest sights in football – and on the odd occasion it does happen, even as he enters the latter stages of his career, he’s rarely happy.

Ronaldo had a brilliant relationship with Sir Alex Ferguson during his first six years at Old Trafford, but he clearly didn’t agree with the manager’s decision to substitute him in the Manchester derby in 2009.

The winger was seen snatching his tracksuit from the assistant kit man before throwing it to the ground and looking upset on the bench.

Former United striker Dwight Yorke said: “When you look at what is happening at United — going for the title and in the Champions League final — everything is great.

“Then you get someone behaving like that. To throw away his tracksuit top and huff and puff is uncalled for and out of order, there is no need.”

Ronaldo only made three more appearances under Ferguson before joining Real Madrid for £80million that summer.

With Real Madrid beating Las Palmas 2-1 in 2017, Zinedine Zidane made the surprise decision to replace Ronaldo with Lucas Vazquez in the 72nd minute.

The forward was clearly unhappy with the decision because he refused to make eye contact with the coach before throwing his wrist bandage on the floor.

Spanish TV station Cuatro reported that the angry Ronaldo said: “Why me? I do everything to make it 2-1…for fuck’s sake!”

However, his anger may have been justified as with Ronaldo on the bench, Las Palmas grabbed a late equaliser.

Ronaldo took his frustration out on the cameraman after being substituted during Madrid’s game against Levante in 2018.

Zidane’s side were 2-1 up when the then-32-year-old was replaced by Marco Asensio with eight minutes remaining. As he made his way to the bench, Ronaldo refused to acknowledge Zidane, but he noticed that a cameraman was filming his reaction.

The superstar could be seen saying: “Focus on the game. Don’t film me, show the match.”

Yet again, Zidane was left regretting his decision after Levante scored an equaliser in the 89th minute.

With Juventus chasing a winner against Lokomotiv Moscow in the Champions League, Maurizio Sarri made the bold decision to withdraw Ronaldo in the 81st minute

Ronaldo wasn’t impressed as he marched straight past his boss while muttering to himself, but the Juventus manager denied the forward was angry with him.

“Cristiano Ronaldo was angry because he’s not okay. He’s had a niggle in his knee for the past few days, which is overloading his thigh, which tires out too much,” Sarri said to Sky Italy.

After his strop against Lokomotiv Moscow, Ronaldo was also substituted in Juventus’ next game against AC Milan in November 2019.

With the game level at 0-0, Sarri replaced Ronaldo with Paulo Dybala in the 55th minute and the Argentina international went on to score the winner for Juve.

Ronaldo was clearly annoyed as he headed straight down the tunnel and Sky Italy reported that he left the ground three minutes before full-time. That’s one way to beat the traffic.

So far in 10 Serie A games this season:

Ronaldo started United’s Premier League game against Brentford in January 2022 and produced a moment of class to help them go 2-0 in front.

The 36-year-old, who had missed United’s last two games with a hip injury, was then replaced by Harry Magure in the 71st minute as they looked to preserve their lead.

But the forward was visibly frustrated and clearly felt that he’d been denied a chance to get on the scoresheet. He threw his jacket to the ground as he sat down on the bench and was later seen questioning the decision to withdraw him.

Ronaldo then watched on as substitute Marcus Rashford made it 3-0 to United before Ivan Toney scored a late consultation for the home side.

“The only reaction I got was, ‘why me? Why did you take me off?’ I had to take the decision in the interest of the team and the club,” manager Ralf Rangnick said after the game. “We did the same thing when 2-0 up at Villa and didn’t want to make the same mistake again.

“I understand Cristiano is ambitious but maybe when he is a manager in the future, he will make the same decision after 75 minutes.

“I didn’t expect him to hug me after being substituted. I know how goalscoring players think and I had to make this decision. I have no issues with Cristiano. He was coming back from injury and hadn’t played for one-and-a-half weeks.

“We had the likes of Rashford and Anthony Martial on the bench so why not use it? I would make the same decision again.”

Cristiano Ronaldo was not happy at being withdrawn in the 70th minute with Man Utd 2-0 up against Brentford… pic.twitter.com/gx0uur4GZf