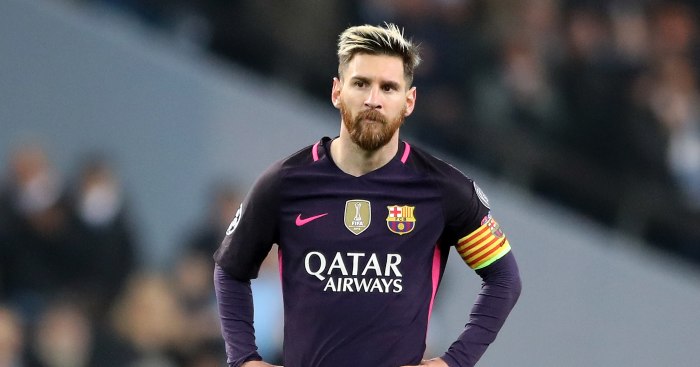 Lionel Messi stunned the footballing world on Tuesday night by submitting a formal transfer request to Barcelona with the club in turmoil.

Amid threats of legal battles regarding the validity of a clause in Messi’s contract allowing him to leave the Nou Camp on a free this summer, it remains to be seen whether the 33-year-old does indeed leave Barcelona or whether it is a powerplay to oust beleaguered club president Josep Maria Bartomeu.

Regardless of the outcome, it’s not the first time Messi has come close to leaving the Nou Camp.

Following the news of Messi wanting out of Barcelona, The Athletic published an explainer on the situation which featured an intriguing section on City’s interest.

City have been interested in Messi ever since Khaldoon Al-Mubarak took over the club, but: “The position of Guardiola, sporting director Txiki Begiristain and chief executive Ferran Soriano is effectively this: they are willing to make it happen, but can’t be seen to want to make it happen. They do not want to be the bad guys at the Nou Camp.”

Coincidentally, shortly after Guardiola was appointed as manager in 2016, City distanced themselves from quotes attributed to Al-Mubarak, who reportedly told press in the Middle East: “We asked Guardiola to talk to him, we offered him triple the salary he has at Barcelona, but he never accepted.”

Another eye-catching line from The Athletic’s report suggested: “Real Madrid president Florentino Perez has previously made serious efforts to convince Messi and his family to make a ‘Luis Figo-style’ move across the Clasico divide.”

They claimed their first approach came in 2011, when Cristiano Ronaldo was being linked with a move from Real to Manchester City. In 2013, Perez reportedly tried again after Barcelona had beaten Madrid to the signing of Neymar. And a third attempt was allegedly made after Barcelona had won the Treble in 2014-15.

The story of their 2013 approach tallies with a report published by Der Speigel, which suggested Real were willing to meet Messi’s €250million release clause and even claimed Los Blancos were willing to “put pressure on [Mariano] Rajoy”, the prime minister of Spain, with regards to Messi’s tax evasion investigation.

Often mentioned as one of the few possible teams Messi could join if he ever left Barcelona, Inter are once again reportedly in the frame following his explosive transfer request.

But they came closest to a deal back in 2006, when they were willing to match his €150million buyout clause, despite the player being just 19 at the time.

Former president Joan Laporta told The Guardian: “They were prepared to pay the €150million buyout clause, which is why we [later] raised it to €250million, but I always felt reassured by my relationship with his dad, Jorge.

“I told him, ‘They’ll have to pay the clause because I won’t sell. He’ll be happy here, he’ll get glory. There, he’ll only win financially. Your son’s destined to be the greatest in history and here he’ll have a team to help get there. He’ll enjoy it.'”

In classic Arsene Wenger style, the former Arsenal boss claims he came close to signing Messi – and Gerard Pique – at the same time the Gunners landed Cesc Fabregas from Barcelona.

“We were in discussions with Barcelona when we bought Fabregas, because Messi played [with him],” Wenger told beIN SPORTS in 2019.

“You can realise sometimes what fantastic youth teams you had before when you’re a club like Barcelona. In the same team: Messi, [Gerard] Pique and Fabregas.”

In 2019, Messi revealed he wanted to leave Barcelona five years earlier in the wake of being found guilty of defrauding Spanish tax authorities.

“I had it in my mind to leave at that time, not to leave Barcelona but to leave Spain,” he told RAC1. “I felt that I was being mistreated and did not want to be here anymore.

“I had the door opened by many clubs but I never had an official offer because everyone knew of my previous desire to continue in Barcelona. The feeling I had went beyond what I felt for this club.

“There was a time when I ended up tired by a lot of circumstances, it has happened several times, especially in 2013 and 2014, with the problems with the treasury and everything that came out. It was difficult for me and my family, many people did not know what I was going through and I heard a sector of the press helped to make this happen.”