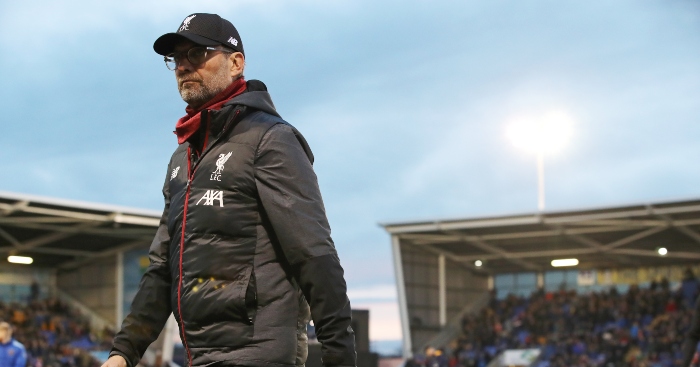 Jurgen Klopp has caused plenty of controversy by announcing he will not take charge of Liverpool for their FA Cup replay against Shrewsbury Town.

Liverpool were held to a 2-2 draw, with Klopp in the dugout, at New Meadow, but the German will skip the replay at Anfield with under-23 boss Neil Critchley set to take charge of a team of youngsters.

Allardyce was an unpopular appointment among Everton fans from the moment he replaced Ronald Koeman in November 2017.

And the one-time England boss (it’s easy to forget these days), risked further ire of supporters by skipping the Europa League trip to Apollon Limassol, sending a makeshift squad to Cyprus so he could spend more time working with the first-team squad at Finch Farm ahead of the Merseyside derby.

The fixture was Everton’s last of the group stage, and by that point they had no chance of qualifying after the worst performance in the competition from any English team in history, drawing once and losing four of their opening five matches.

After Allardyce’s decision was initially reported, it was later announced he had a ‘long-standing medial appointment’ instead.

Either way, stand-in bosses Craig Shakespeare and Duncan Ferguson managed to lead the Toffees to a 3-0 win in Cyprus. And Allardyce was somewhat vindicated when Everton battled their way to a 1-1 draw at Anfield in the following game.

Everton boss Sam Allardyce will miss the club's final Europa League match at Apollon Limassol in Cyprus tomorrow, after confirming that he 'couldn't give a big, steamy sh*te' about it'.

Another manager not too popular with his club at the time, Leeds fans were already sceptical of how much time Warnock spent in Cornwall before he missed the FA Cup tie with Birmingham City due to illness.

Warnock instead listened to the game on the radio from home and had heard enough to phone assistant manager Mick Jones and instruct him to make two half-time changes with Leeds 1-0 down at the break.

Jones then put Warnock on loudspeaker to allow him to make his team talk. It clearly had the desired impact as Luciano Becchio bagged an equaliser to take the game to a replay, which Leeds won 2-1 at St Andrew’s.

“My only concern is Mick is unbeaten in matches I’ve missed, winning the previous two – he was my assistant at Notts too,” Warnock wrote in his column for The Independent.

“When I spoke to Shaun Harvey, our chief executive, on Friday and said, “If I feel like this I’ve no chance of making the game”, Shaun replied, “Don’t worry, I’ve checked with Mick and he has a 100 per cent record.”

The column as a whole is so wonderfully Alan Partridge it’s well worth a read, featuring musings on Peter Kay and Michael McIntyre, what a good manager Wolves have appointed in Dean Saunders (he got them relegated), Leeds’ upcoming trip to managerless Barnsley (they lost) and his excitement at signing Ross Barkley on loan (who Warnock sent back after four matches as he preferred Michael Brown in midfield).

It’s often overlooked that Davids initially had a positive impact at Barnet as player-manager, inspiring an upturn only for the club to be relegated out of League Two on the final day of the season.

Few expected Davids to stick around in the Conference, and it would probably have been for the best if he hadn’t had bothered. He assigned himself the No.1 shirt, was sent off three times in five matches and made an arrangement with the club that meant he was not obliged to travel to away games that required an overnight stay, leaving assistant Ulrich Landvreugd in charge.

By January, Davids had resigned with Barnet 10th in the league.

While presiding over 1,500 matches in charge of Manchester United, Ferguson was absent on the bench on three occasions.

One was understandably to attend the funeral of his brother’s wife, while he missed a clash with Manchester City at Maine Road in November 2000 – the first Manchester derby in four years – to attend his son’s wedding in South Africa.

“I looked at the international fixtures for the season and originally, back in February, November 18 was down as an international date,” he told the Sunday Express. “My son went for that date for his wedding only for the fixtures to be changed.

“We found out that instead of having a free weekend, we are playing Manchester City – it couldn’t have been any worse for me. The wedding is in Cape Town so there’s nothing I can do. Steve McClaren will be in charge.

“The only consolation is that with it being a morning kick-off, I will be able to watch the game in South Africa on television.”

With McClaren at the helm, United won 1-0 thanks to David Beckham’s second-minute goal.

The final fixture Ferguson missed came in September 2010, when he decided to skip a 5-2 victory over Scunthorpe United in the League Cup.

It was initially reported that Ferguson was instead scouting Valencia, who United were set to face in the Champions League the following week, but former coach Eric Steele revealed in 2017 it was actually to scout the goalkeeper Valencia were facing, Atletico Madrid’s David de Gea.

“I was convinced that a 19-year-old De Gea was the right man to replace him,” Steele told the Daily Mail. “I showed a three-minute DVD compilation to Sir Alex and then we went to watch him play for Atletico Madrid at Valencia on the night United played Scunthorpe in the League Cup.

“Sir Alex knew he was the right signing inside 65 minutes. David showed composure, concentration and reflexes. He made one terrific save that went through a load of bodies.”

We’re going to let Klopp off for missing Liverpool’s League Cup quarter-final against Aston Villa, given he was in Qatar at the time as the Reds’ first team competed in the Club World Cup.

But the Reds boss has attracted plenty of criticism for his decision to send out a team of youngsters under the management of Neil Critchley for the FA Cup replay against Shrewsbury at Anfield.

“In April 2019 we got a letter from the Premier League, I think, where they asked us to respect the winter break and not to organise international friendlies or competitive games. We respect that,” he said after drawing 2-2 at New Meadow.

“So I said to the boys already two weeks ago that we will have a winter break which means we will not be there. It will be the kids who play that game. You cannot deal with us like nobody cares about it. I know that it’s not very popular, but that’s the way I see it.

“The Premier League asked us to respect the winter break. That’s what we do. If the FA doesn’t respect that, then we cannot change it. We will not be there. Does that mean I won’t be there? Yes. Neil Critchley will be in charge.”