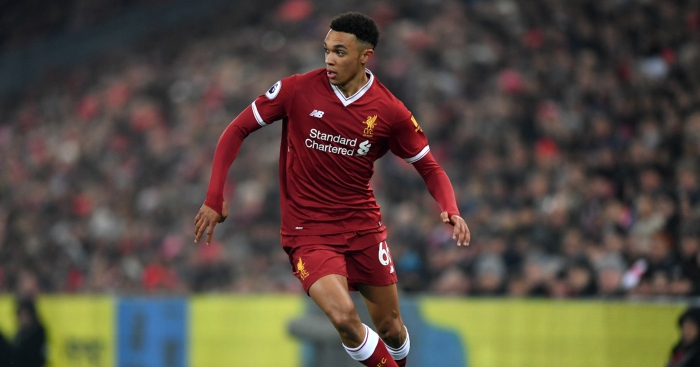 Liverpool and PSG are home to just a couple of the uncapped players from around the world named in their respective World Cup squads ahead of this year’s tournament.

And there are five players who had never won a cap before receiving a call-up for Russia, though two have since made their debuts in friendlies.

Alexander-Arnold has gone from squad player at Liverpool to one of the first names on the team sheet at the tender age of 19.

Scoring on his European debut, securing a top four finish, becoming the youngest Englishman to appear in the Champions League final and now making the final 23 for the Three Lions is a simply outstanding achievement for the young right-back and an opportunity that he thoroughly deserves.

Gareth Southgate now has a huge call to make with who starts in that position at the World Cup, but would anyone be disappointed to see Alexander-Arnold’s name on the team sheet?

– Most minutes of teenagers in the top 6
– Youngest goalscorer in the Premier League
– Youngest Englishman ever to start in the Champions League quarter finals, semi finals & final
– Selected in England’s World Cup squad pic.twitter.com/8LwGN7OFIm

Having spent his first few years at PSG out on loan and playing second fiddle to Kevin Trapp, this year Areola has really made a name for himself. The 25-year-old has played 43 times in all competitions, keeping a clean sheet on 21 occasions.

Will we see him start at the World Cup? Unlikely, but France definitely have a good back-up pair of hands if required.

Caleta-Car appeared an impressive 53 times for Red Bull Salzburg last season and played a key role in their run to the Europa League semi-finals.

At only 21 years of age, the centre-back could have a huge future and will be hoping to get his opportunity on the grand stage in June having made his debut as a 52nd-minute substitute in the weekend defeat to Brazil.

Koen Casteels has a huge task on his hands if he wants to shift Thibaut Courtois from Belgium’s number one spot but has done himself no harm with his performances this season.

The 6ft 5in Belgian kept 11 clean sheets in 39 appearances for Wolfsburg this season, an impressive number for a team that finished 16th.

Casteels also claimed more crosses than any other goalkeeper across Europe’s top five leagues and it really makes you wonder where Wolfsburg would have ended up without the big Belgian.

At the very least, Casteels seems to have cemented the number two spot for Belgium, with Simon Mignolet and Matz Sels out of favour at their respective clubs.

Koen Casteels: Successfully claimed more crosses (55) than any other goalkeeper in Europe's top 5 leagues this season

The Serb scored nine goals in 27 last season, including the winner in the German cup semi-final, a competition which they went on to win.

After a successful season at club level, the forward will now be pushing for a starting place in Russia, though he was only an 84th-minute substitute in Serbia’s defeat to Chile at the weekend.