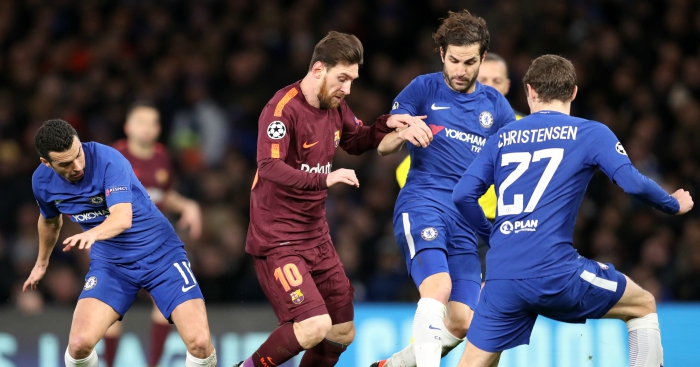 While they may have suffered a surprise defeat in the Champions League, Barcelona completely dominated Spanish football in 2017-18.

Barca have already claimed the Copa del Rey, courtesy of a stunning 5-0 display against Sevilla in Madrid.

And Ernesto Valverde’s men are only five games away from going the whole league campaign unbeaten.

So how about giving them an altogether different challenge? Could they manage to keep up such consistency in The Best League In The World™?

That’s right: we’ve moved Barcelona over to the Premier League to settle the age-old debate once and for all: could they do it on a cold, wet Tuesday night in Stoke? 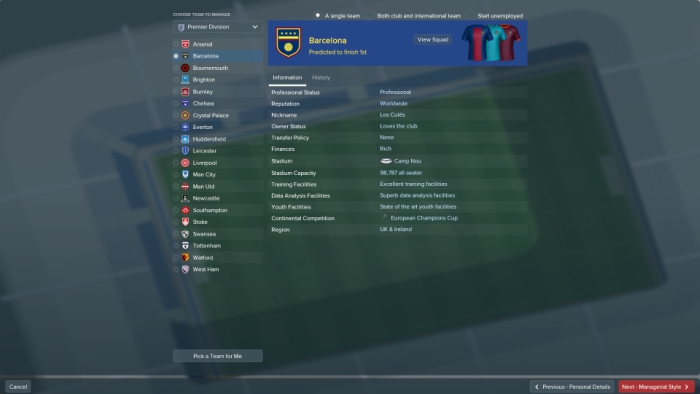 We can immediately put the meme to bed after the first matchday, as Barcelona thrash Stoke City 4-1 in their inaugural Premier League outing – to be fair, they were playing at home, so the jury is perhaps still out.

Still, they keep racking up incredibly impressive results, always remaining close to the summit in the calendar year: in fact, their only defeat in the first half of the season came at Chelsea thanks to an Alvaro Morata wonderstrike.

This, coupled with an impressive 3-0 win at Old Trafford and a 3-2 home triumph over Pep Guardiola’s Manchester City sees them joint first in the league with Manchester United after 21 games.

Barcelona’s pristine record takes a minor hit in the festive period, however, as they draw twice with Liverpool and also drop two points to Newcastle United on Boxing Day. The only real aberration is their third-round defeat to Birmingham City in the Carabao Cup, but every strong team has a Wigan Athletic to thwart it in a cup or two.

Manchester City are still in contention in the league, but it seems like the London sides are going to have to settle for a fight for fourth. 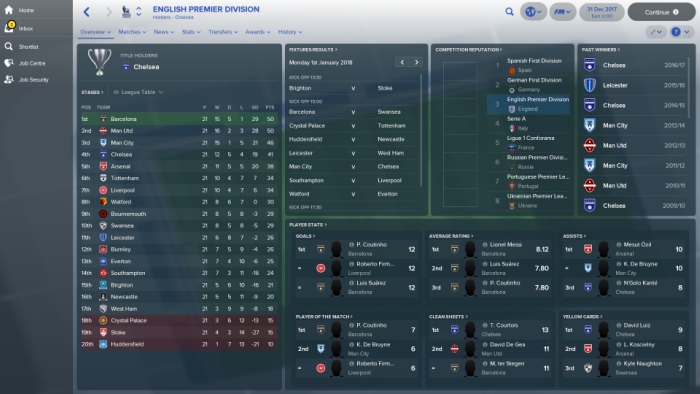 Things get even more chaotic by mid-March as Valverde’s side eek out a five-point lead, albeit having played one match more than the Red Devils. Their only other loss in the league so far came at the Etihad, but they haven’t even conceded a single goal in their last five games – including a narrow victory over PSG in the Champions League.

Yes, they beat Stoke again, and it was a 4-0 win this time. They also won 3-2 at the Potters in the FA Cup. Can we finally put this thing to rest?

Looking at the run-ins, they seem to be the clear favourites: they only face Arsenal and Mourinho’s men in the last seven games from the top 10 while United have to contend with Chelsea and Tottenham alongside what will likely be the title decider at the Nou Camp on April 21. Both clubs are still involved in the Champions League, so it’s all to play for still.

The run-in surpasses everyone’s expectations. Titles can be decided by the slimmest of margins and this is going to be one of those races.

With a single game to go, Manchester United and Barcelona are neck and neck. United drew with the Catalans and won every single other match in this gruelling period while their new-found rivals crucially lost to Arsenal at the Emirates and drew at home to Everton.

Barcelona have managed to lose their stranglehold on first place, having to hope for a miracle by Huddersfield at Old Trafford while they go to St James’ Park on the final day of the season.

To add to the drama, they are also going to face each other in the Champions League final a few days after the title is decided. 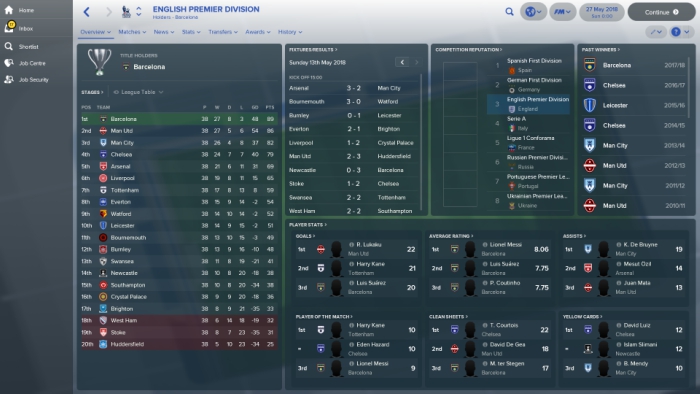 After conquering all obstacles in the run-in, Manchester United finally slipped up at the worst possible moment, losing 3-2 to Huddersfield and handing the Premier League title to Barcelona in the process.

Romelu Lukaku could at least console himself with the Golden Boot, scoring 22 goals to Harry Kane’s 21 and Luis Suárez’s 20.

In the end, the three highest-rated players all hail from Catalonia and Messi’s side only lost three games throughout the season to United’s six – not to mention the head-to-head results, which were also exacerbated by Barca’s win over United the FA Cup, albeit that trophy ultimately went to Liverpool.

Mourinho’s outfit did win the League Cup earlier in the season, but they were certainly the underdogs in the Champions League final, marking the third time in a decade that these teams were fighting for the most prestigious trophy in football. 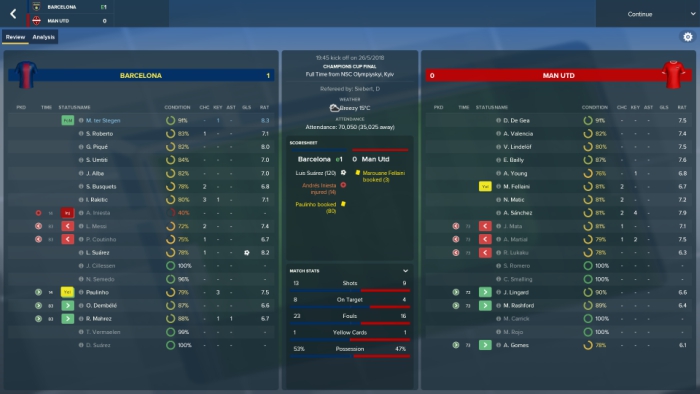 In an extremely tight affair, Barcelona claimed that title as well, despite Andres Iniesta’s early injury, with a 1-0 win thanks to Suárez’s sucker-punch in the 120th minute.

Don’t say Mourinho has no faith in youth: after losing Luke Shaw and Paul Pogba to injuries, he opted to field a 17-year-old Angel Gomes. His faith was repaid by a rating of 6.1.

What can we say? Hats off to both fictional sides for giving us a much more exciting title race than anything we have seen in the Premier League this season.