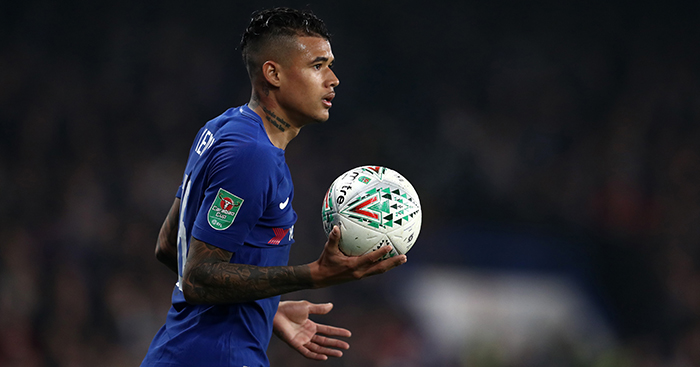 Chelsea have once again got a small army of players out on loan this season – but are any of them good enough to be competing at the top end of the Premier League already?

Chelsea’s approach to youth development has seen them lose out on the likes of Romelu Lukaku, Mohamed Salah and Kevin De Bruyne at the peak of their powers, and though it has worked well from a financial perspective, they continue to face criticism for the approach.

But are they missing a trick with any of their current loanees? We put all 29 of them into a Premier League squad on Football Manager to find out…

The engine predicts them to finish 15th which would mean a difficult but respectably-concluded fight against relegation.

Their opening game pits them against Tottenham – Conte goes with a 4-2-3-1, with Michy Batshuayi leading the line, and Kenedy, Izzy Brown and Tammy Abraham providing the support.

Tiemoue Bakayoko and Mario Pasalic start in midfield, Kurt Zouma and Tomas Kalas are in central defence, Fikayo Tomori and Baba Rahman are at full-back, while 35-year-old Eduardo, who signed a new contract only to go out on loan to Vitesse, starts in goal.

Chelsea Loanees lose 2-0, with Lucas Moura and Harry Kane scoring the goals with Spurs’ only shots on target.

None of the Chelsea Loanees really distinguish themselves, but Baba Rahman is MOTM in this game and the next with a couple of assists in a surprise win over Liverpool.

Their fifth game pits them against the actual Chelsea side, and the loanees’ hunger is evident as they score from a set-piece after just five minutes through Kurt Zouma’s header.

The young defender goes close again from another free-kick shortly thereafter, while Lewis Baker impresses in midfield, but Olivier Giroud turns the match around to earn Maurizio Sarri’s men a narrow 2-1 win despite the loanees once again restricting their opponents to a handful of shots.

Conte insists on keeping Eduardo in goal, which is an interesting decision considering his back-to-back sub-6.0 ratings (for those of you out there who are not that well-versed in Football Manager’s stats, this translates to horrendously awful), but there are some more impressive performers at the other end.

By November, Kenedy stands out as the best of the lot with three goals and five assists to his name – a decent chunk of the team’s overall output – but it’s Batshuayi who steals the show against champions Manchester City, scoring twice in a thrilling 3-2 victory.

An Eduardo howler against Fulham in the next game denies the loanees another victory, while December brings four successive defeats before Batshuayi and Abraham score in a 2-1 win over Tottenham.

They celebrate New Year’s Eve in 19th place, only two points from safety and a further two behind 15th-placed Brighton but with Conte’s job in jeopardy and the board keen to see a marked improvement. 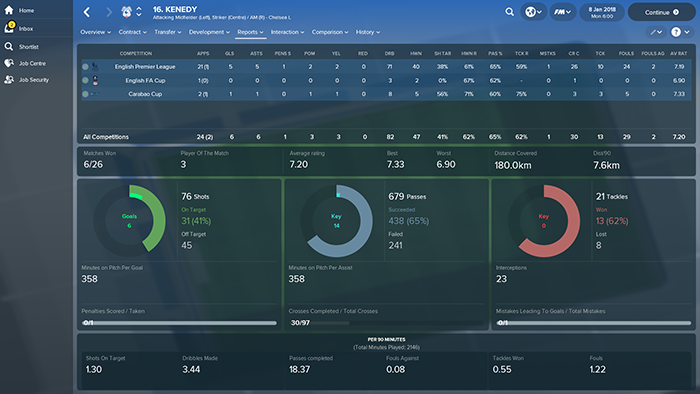 A 3-0 loss to Liverpool follows. They do win their opening FA Cup game against Charlton, but Batshuayi injures himself after scoring and is ruled out of the loanees’ second meeting with Chelsea.

Forced to adapt, Conte opts for a midfield diamond as Abraham is inexplicably benched to shoehorn Charly Musonda into the side.

Eden Hazard scores after 10 minutes, and Bayakoko is sent off before half-time for a two-footed lunge on Pedro, but Chelsea fail to add any further goals as Zouma stands out for the loanees. Still, they are now six points away from safety.

Amusingly, Pantic and Charlie Colkett are listed for loan by Conte, clearly not satisfied with their performances.

Batshuayi’s return marks a major upturn in performances: two wins and a draw follow before understandable defeats to Arsenal and Manchester City. 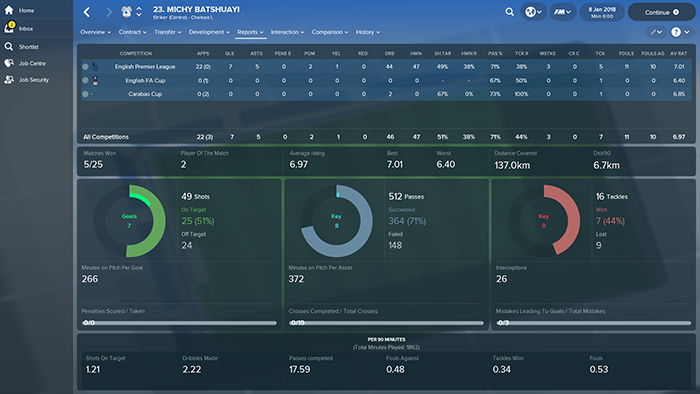 Batshuayi and Kenedy once again steal the show as the Chelsea Loanees defeat Leicester and draw against Fulham to maintain a semblance of hope of survival – they are eight points from safety with seven games to go – but the dressing room atmosphere takes a turn for the worse when Batshuayi asks to leave the club with multiple influential players backing him in the dispute with Conte.

It’s not all doom and gloom: in the FA Cup they’ve taken down Preston, Stoke and Southampton to set up a semi-final meeting with, of course, Chelsea.

Despite the Batshuayi fall-out, a win over Bournemouth and two successive draws follow to increase their survival chances. It’s going to be close.

Meanwhile, Wolves hire Sam Allardyce, and Everton offer a job interview to my observer persona out of the blue. I decline as there’s a game at Wembley I really want to watch.

Batshuayi is out of contention once again, which means Conte opts for the same formation he used in the narrow defeat to the real Chelsea the last time around. Bakayoko plays at the heart of the defence. I’m convinced this is going to be a disaster. 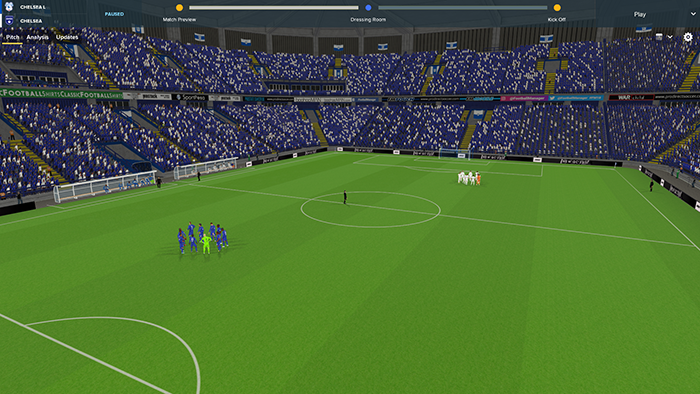 The first half ends without a single highlight of note: the loanees’ ultra-defensive approach is working fine, even if they haven’t managed a single shot on target.

The game follows the same pattern after half-time, and Eduardo pulls off a wonder save with a few minutes to take it to extra time. It’s scrappy, frustrating and provides limited opportunities: exactly like these players’ experience at Chelsea.

In the end, it’s a moment of brilliance by Hazard that separates the two teams, and a frustrated Bakayoko picks up another red card in the dying moments of the game. Close but no cigar.

It’s the same story in the league as they miss out on survival by a mere three points. Batshuayi and Kenedy deliver two wins out of the last three games but can’t repeat their heroics against a rampant Manchester United on the final day of the season.

Relegation pushes the team into disarray: half of the squad is transfer-listed and the other half requests a move on their own volition.

Bathsuayi goes on to join Napoli at the earliest opportunity as Chelsea’s ultimately loanees fail to prove their worth in the Premier League. You can’t really argue with their parent club’s decision-making based on this little experiment.