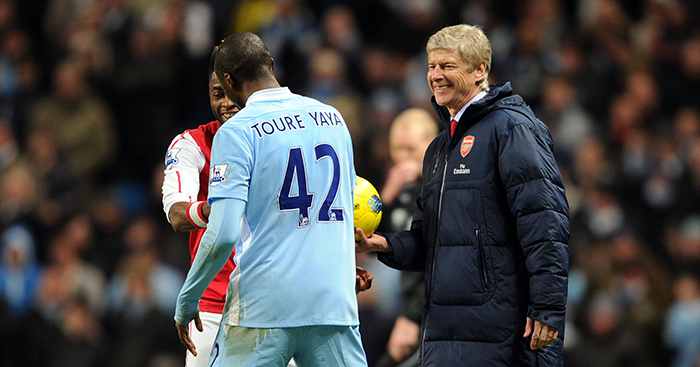 Arséne Wenger often regales us with stories of great players he almost signed for Arsenal – and it almost doesn’t bear thinking about how much more successful the club might have been had he landed them.

From Gianlugi Buffon in goal to Lionel Messi, Cristiano Ronaldo and Luis Suarez in attack, Wenger missed out on some of the world’s finest players over the years.

It is, of course, just a by-product of his long spell in charge of Arsenal – every top manager around the world could tell similar stories of players they looked at signing – but it has never stopped media outlets from putting together XIs of the Frenchman’s best ‘nearly’ signings over the years.

So it’s high time we look at how well he would have done with those players available to him – by, of course, simulating the experience in Football Manager.

We haven’t included Messi or Ronaldo because that would be just unfair to everyone else in the world of football. Still, this squad is incredibly powerful, even if many of the players are slightly on the older side by now. 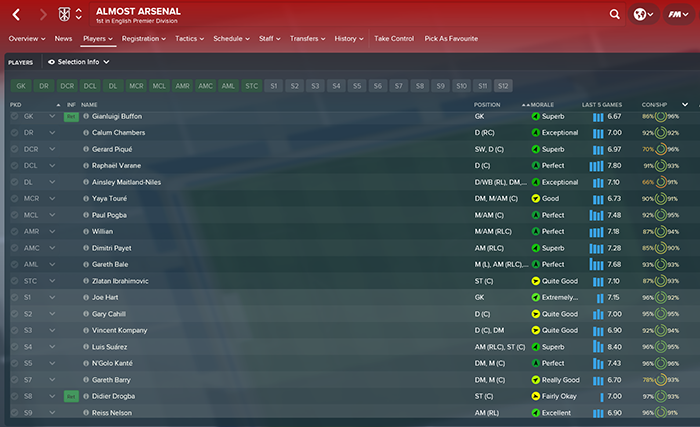 Buffon’s in goal with Joe Hart on the bench, protected by Gerard Piqué, Viincent Kompany, Gary Cahill and Raphael Varane.

Ahead of them is a powerhouse midfield consisting of N’Golo Kanté, Paul Pogba, Yaya Touré and Gareth Barry.

Of course, Gareth Bale is also here, providing ample service to a trio of excellent strikers in the form of Suárez, Ibrahimovic and Didier Drogba.

Dimitri Payet also makes an appearance in the squad – as would Xabi Alonso if he hadn’t retired yet.

The squad is completed by some of the promising youngsters who gave a good account of themselves during Arsenal’s recent 2-1 defeat at Old Trafford, both to replicate Wenger’s signature trust in youth and to make sure the squad isn’t too thin to compete throughout a whole season.

We also created a special manager for this special side, one that is almost a perfect replica of a certain Arséne, but perhaps slightly more ruthless in his transfer dealings: say hello to Monsieur Almost Wenger, a man on a mission who has gone on record stating that his side will definitely win the Europa League this season.

For what it’s worth, the game expects this new-fangled side to finish second in the league, while the real Gunners are only predicted to finish seventh before the league kicks off.

To incorporate Almost Arsenal, some space had to be made in both the international and domestic competitions: out go Everton from the Europa League (don’t worry, Toffees fans, you’ll be better off this way: unless you really enjoy losing to Atalanta, that is) and West Brom from the Premier League (this was written before their latest win which could yet see them survive).

The two Wengers agree on a stadium-sharing scheme reminiscent of the San Siro situation, and with that, the simulation begins.

Despite the truly hype-worthy squad and notable friendly wins against Barcelona and Juventus, Almost Arsenal struggle at the start of the season.

To be fair, Almost Wenger has good reasons to bemoan the opening set of fixtures as they had to face both Manchester clubs, Chelsea and the original Arsenal in their first seven games.

It’s a mixed record: a 1-0 loss at Old Trafford was followed by a shocking 3-1 defeat against Arséne Wenger’s men, but the later matches show some promise with a draw against Chelsea and a 3-0 triumph over Manchester City forming the backbone of a five-game unbeaten run in the league.

Still, the two early defeats put the side in seventh place for the time being, while Arsenal are in third with only four points dropped so far. 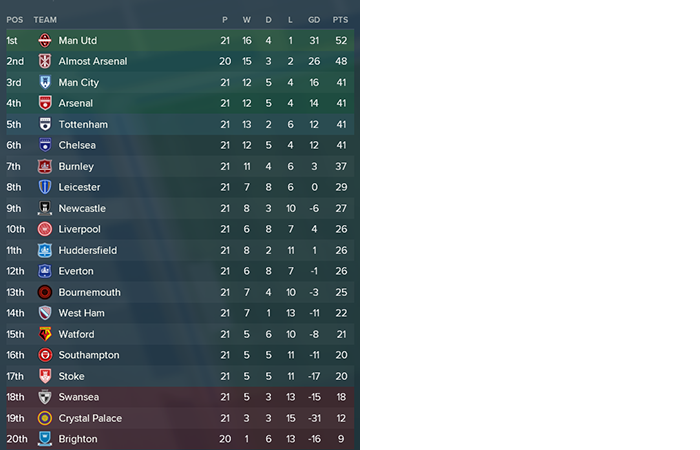 By December, the tables have turned: Almost Arsenal occupy the second spot after twenty-one rounds while the real side slips to fourth, seven points behind the steely doppelgangers who also have a game in hand against last-placed Brighton.

The traditional New Year’s fixtures include a pivotal game between United and the Almosts, which is perhaps the best chance for our fictional side to catch up to their title rivals.

They are undefeated in all competitions since an unexpected extra-time loss to Burnley in the Carabao Cup back in September, thrashing Liverpool 3-0 at Anfield and just about beating Arsenal in their reverse fixture by three goals to two.

Had the Gunners won that, they would only be one point behind the side that could have been, but instead they will have to rue soft defeats against Crystal Palace and Leicester for their current place in the league.

They had also been on quite the run until November, but they have picked up only five points from their last five games at this point.

We’ve got to point out the most incredible piece of transfer news in the winter window that quite easily trumps all of Arséne’s unfulfilled dreams. Jack Wilshere has finally left his boyhood club, but he didn’t want to go very far: he joined the slightly more star-studded version of Arsenal in an £11million deal that truly must have delighted the two managers for very different reasons.

Both Arsenals quite easily qualified for the Europa League knockout stages, and the draw was also kind to them in the round of 32: CSKA Moscow host the original side in an interesting re-enactment of this year’s real-life fixtures, while the alternative version has to contend with Galatasaray to get one step closer to making Almost Wenger’s bullish pre-season statement a reality.

By the time March rolls around, Almost Arsenal are still in second, now five points behind United, having also played an extra game and Arsenal are just us stubbornly clinging on to that coveted fourth-place trophy, albeit with two games in hand.

Winning both would allow them to catch up with Manchester City in third, but they would still be four points away from the… let’s just call them Ghunners, shall we?

It’s also worth mentioning that Luis Suárez is topping all the charts with 17 goals scored, the highest average rating and the most man of the match awards, while Buffon and De Gea are in a titanic struggle for the Golden Glove with 12 clean sheets each in the league.

There are still quite a few stories to tell in the remainder of the season, including the European struggles of both sides: the Gunners drew in Moscow and barely won at home while the ‘Ghunners’ could only muster up two high-scoring draws, progressing on away goals in the end.

The two teams also left it late in the next round, having to make up for a home defeat against Real Sociedad and an away draw versus Marseille, respectively.

The rest of the European saga heavily features the city of Milan: Inter made it to the final by knocking out both Tottenham and Liverpool on the way, and AC Milan swiftly put an end to Arséne Wenger’s European adventures in the quarter-finals.

Almost Wenger vowed to avenge his comrade after trouncing Villareal 6-1 on aggregate, and he got his wish in the semis, winning both legs against the Rossoneri to hammer the point home.

By that point, the league was out of sight: in the end, Mourinho’s men finished on 91 points, seventeen ahead of Almost Arsenal, who eventually slipped down to third, with City taking the silver medal thanks to an extra two points and an excellent run-in. 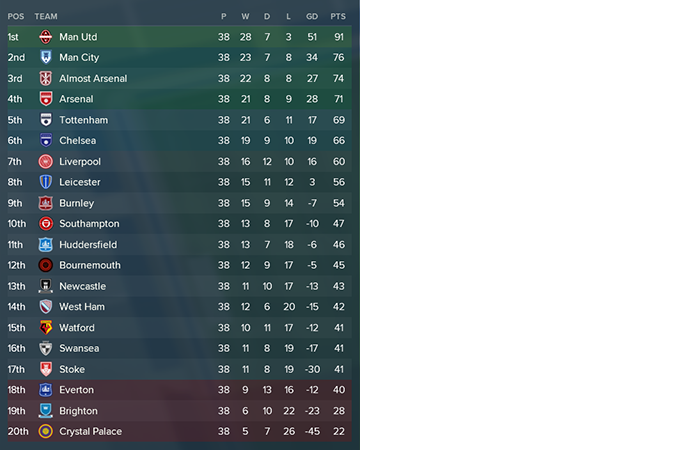 In the meantime, Arsenal ended their season in a quite appropriate fashion, finishing fourth and just pipping Spurs to the final coveted Champions League places.

Not only that, but they also won the FA Cup, beating none other than the ‘Ghunners’ 3-2 after extra-time in a riveting final. Jack Wilshere tried his best against his former club after coming on as a substitute, but he had to be taken off 20 minutes later due to an injury. 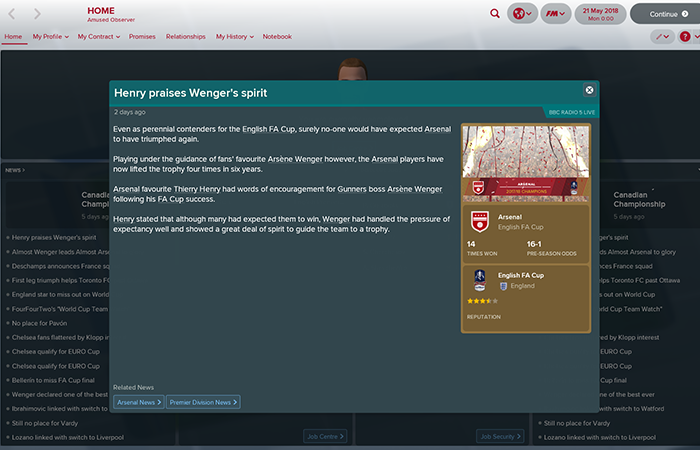 Almost Arsenal, meanwhile, made good on their manager’s promise and lifted the Europa League trophy after a 1-0 win over Inter Milan.

One would like to imagine Almost and Arséne both stepping down and walking into the sunset together after finishing both their respective seasons with some cup glory – but knowing both men, these results will likely only spur them on to sign a new two-year contract.