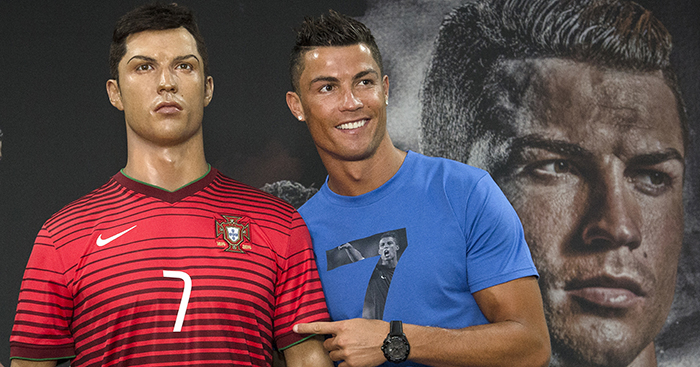 “If everyone was at my level, perhaps we would be in first place.” Cristiano Ronaldo upset the haters with his comments about his Real Madrid team-mates in 2016 – and now it’s time to put his assertion to the test.

Ronaldo later downplayed those comments slightly, claiming he was referring to his “physical level” after a defeat to Atletico Madrid missed by several players through injury, but when you’re one of the best players the world has ever seen, you probably would wonder.

Even now, at 33, Ronaldo is setting standards as the top scorer in all competitions across Europe’s five major leagues in 2018. In fact, it’s his best ever start to a calendar year with 23 goals in 14 games – a gargantuan achievement.

It has not been a good season for Real as a collective so far, however, with Zinedine Zidane’s side only third in La Liga and knocked out of the Copa del Rey by Leganés, though they are still in the Champions League.

Ronaldo, of course, already boasts four Champions League medals as part of his extensive collection of honours. In fact, perhaps the only thing larger than his medal collection is his ego – which is why we decided to create the ultimate team of Cristiano Ronaldo’s dreams: his personal clone army.

Can they conquer Europe using all the hair gel in the world? Will ten of the Ronaldos accept they won’t be scoring all the goals? Will they be sued for registering the same player multiple times? So many questions to answer… 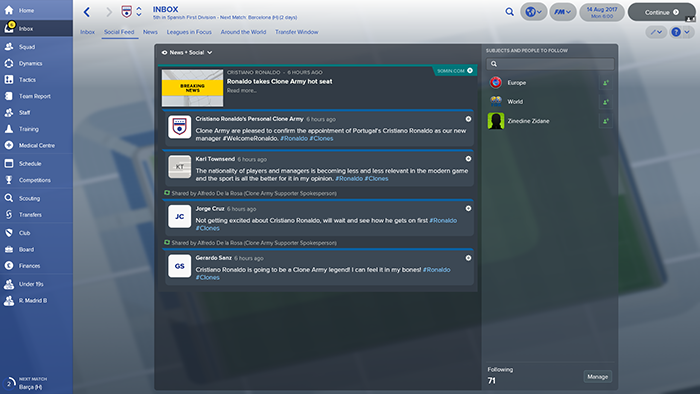 After hiring the perfect manager for this perfect team, and making sure they won’t cheat by bringing in an actual goalkeeper (imagine that travesty), I let the simulation chug along at its usual pace to figure out just how good a squad consisting of twenty Cristiano Ronaldos actually is.

This isn’t my first rodeo with the FM experiments, but it was something special.

I watched in disbelief as the achievements kept rolling in as my dedicated dummy manager’s holiday was passing by: Score over five goals in a competitive game; a ten-game unbeaten streak in the league.

We were in October. I couldn’t wait until Amused Observer’s self-imposed holiday ended so I could see what the hell these magnificent clone bastards cooked up. 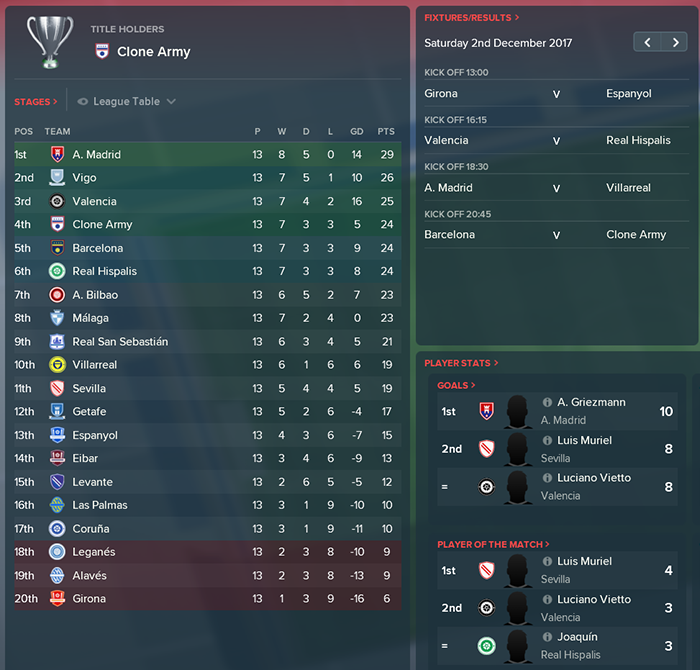 With the third of the season gone, Ronaldo and co (is that even appropriate to say in this scenario, I wonder?) are fourth in the league, two points behind the surprise second-place Celta Vigo and five away from Atletico Madrid.

They suffered heavy defeats in both Super Cups but didn’t lose a single game in the league until October 22 when they were hit by a 5-0 thrashing by Valencia away from home.

Since then, a concerning Copa del Rey draw against third-tier Cartagena and a surprise loss against a fourth-seeded Israeli side in the Champions League led to a few Ronaldos throwing a public hissy fit, but if they can keep up that insane pace they set before, anything is possible for this incredible side.

Well, as it turns out, relying on nothing but 32-year-olds, however freakishly fit they may be, will cause issues in the long run.

Not only the team’s form but also the dressing room’s atmosphere proceeds to deteriorate in the upcoming months, with some of the Ronaldos publicly going against their manager, Cristiano Ronaldo, either demanding more game time, a higher salary, more media attention, or all of the above. 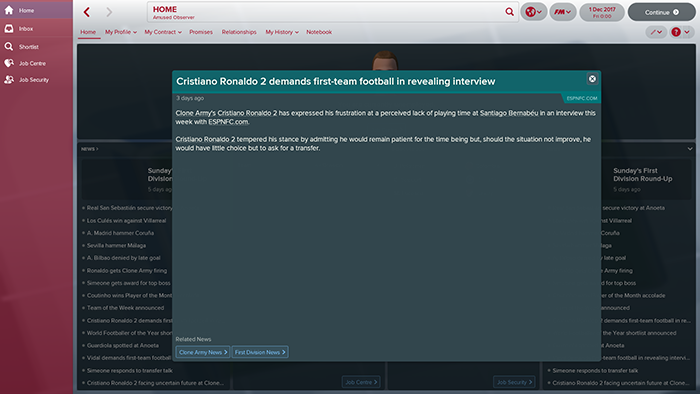 By February, they are down to ninth having picked up eight points in nine games. Shockingly, they’ve lost the return leg to Cartagena and only managed to finish in second place in a very easy Champions League group where Basel ended up with fifteen points.

A seven-game winless period followed the October turmoil, perhaps showing that all these Ronaldos can only work together if everything is going well. They even fell short in the Club World Cup, losing 3-1 in the final.

To make matters worse, personal issues are still brewing in the squad, as another Cristiano Ronaldo also gets angry at the management. Mr. Ronaldo Mk4 seems to think that playing alongside all these posers is somehow beneath him as a player… 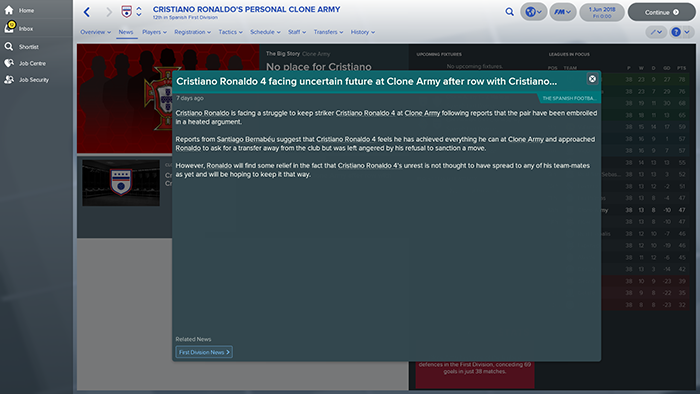 At this point, it’s down to the Champions League, a competition where Ronaldo’s previous team has been excellent in recent years.

The Clone Army face Porto in the round of 16, and who knows: maybe some success in Europe’s premiere competition could still galvanize the clones for an acceptable league finish… 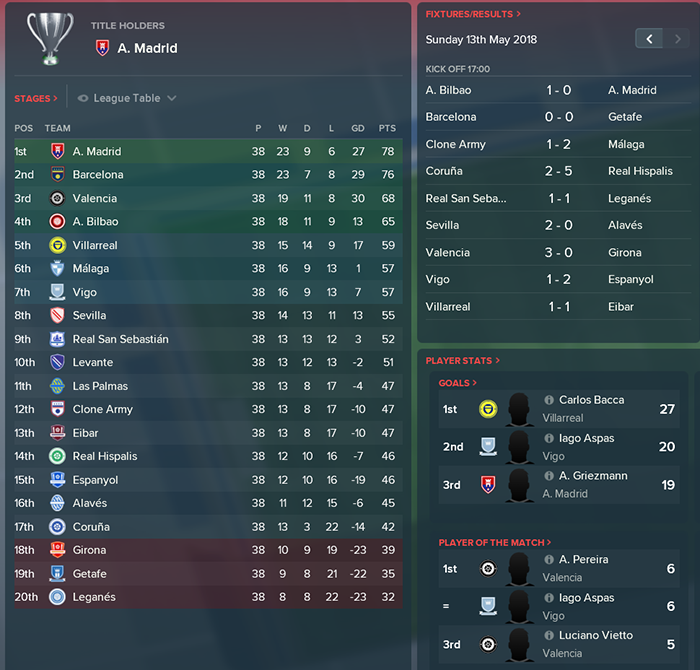 Ouch. Not quite, as it turns out: they end the league in twelfth place, completely collapsing from March onward.

They crash and burn against Porto, losing both legs, then only pick up four points throughout the rest of the season, including a 6-1 humiliation at the hands of Las Palmas, with the manager, Cristiano Ronaldo, throwing a boot at three different Cristiano Ronaldos in a fit of rage.

It’s safe to say his position is under review at this point, with Cristiano Ronaldo and Cristiano Ronaldo both being potential candidates as his replacement. It’s a lot like Athletic Bilbao, you see, except instead of only signing Basques, they only sign Ronaldos.

Their sole victory over this period? A 2-0 win at home against Barcelona, with two goals from – who else? – Cristiano Ronaldo 7. The more things change…