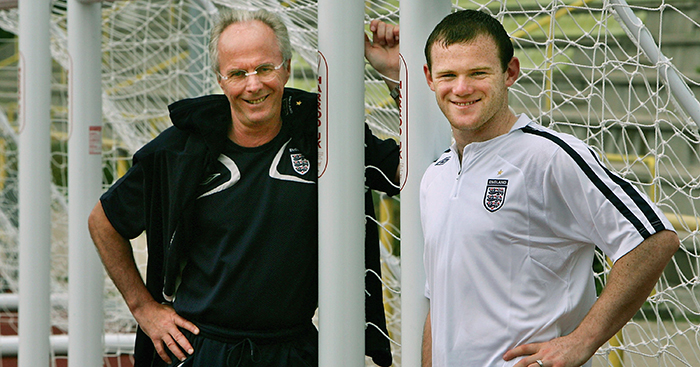 England will be hoping to reach the quarter-finals of a World Cup for the first time since 2006 this summer, but how does Gareth Southgate’s team compare to Sven-Goran Eriksson’s XI from 12 years ago?

Southgate’s England certainly isn’t as star-studded as Eriksson’s was, but there appears to be a much better squad harmony than there was during the so-called Golden Generation, with Frank Lampard, Steven Gerrard and Rio Ferdinand admitting there were too many cliques in their day.

To ensure the complete accuracy of this experiment, I painstakingly plugged in all the player stats from the 2006 edition of Football Manager. It’s quite eye-opening to see how good some of them were at the time, at least according to Sports Interactive: so many of their attributes were off the charts.

The clash between the veterans and the new England side promises to be an interesting tactical battle: a ball-playing 3-5-2 versus the old-school run-and-gun 4-1-4-1, a setup which threatens to leave Wayne Rooney isolated against three centre-backs but gives a lot of freedom to the midfield of Gerrard, Lampard, David Beckham and Joe Cole to create some magic ahead of Owen Hargreaves anchoring.

Sky Sports would have a field day with this game. Harry Kane versus peak Rooney. The ball-playing Walker and Stones trying to outdo the double immovable object that is the Terry-Ferdinand partnership. A fascinating duel of wits between Southgate and Sven-Göran Eriksson. 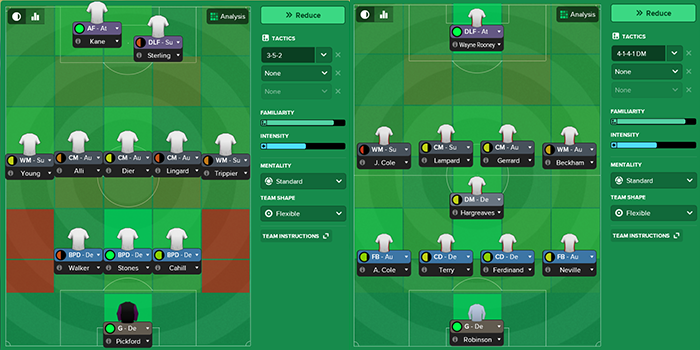 Here’s an interesting quirk of copying the stats from Football Manager 2006: despite the many similarities, the attributes given to players like Gerrard and Lampard apparently make them completely viable defenders in the new game’s eyes.

Joe Cole also seems to be woefully out of place on the wing according to FM18, but the new England will also need Dele Alli and Jesse Lingard to help out defensively to match the 2006 trio. That probably doesn’t bode well…

The new game’s otherwise robust editor is unwilling to help when it comes to creating a brand new national side, so we kindly loan out the entirety of Scotland to set up the 2006 England side in their place. This gives us a nice snapshot of the team’s performance under AI control as they comfortably take second place in the World Cup qualifying group in the automatically simulated games.

Of course, the real deal is the Wembley clash – let’s just pray it doesn’t go to penalties, otherwise it may take all day.

The opening period certainly lives up the hype: it take less than a minute for the present-day England side to score as a perfect cross by Kieran Trippier reaches an unmarked Kane, who gleefully heads it in at the far post before Paul Robinson can react.

Quick, exciting, efficient – could this be the start of a new era? 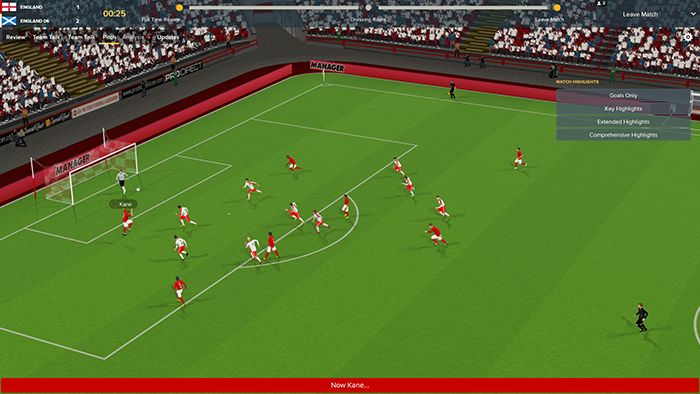 Apparently not. Wayne Rooney evens it up a mere three minutes later as he drops back all the way to the halfway line, picks up the ball, dribbles past the whole midfield, takes out the entire three-man defence thanks to a neat one-two with Beckham, then absolutely smashes it past the stranded Pickford.

A vintage performance from England’s record goalscorer already, and the game is very much on.

He follows up with another threatening run shortly thereafter, but it comes to nothing, and the match settles to a slower rhythm over the course of the next 15 minutes.

Then, out of nowhere, a defensive howler: Lampard hits the ball left to Joe Cole, who easily skips past Trippier and makes a run for it.

The low cross isn’t all that impressive, but Ashley Young fails to make the clearance, Rooney steals the ball off him in the box and immediately punishes 2018 England for the error. 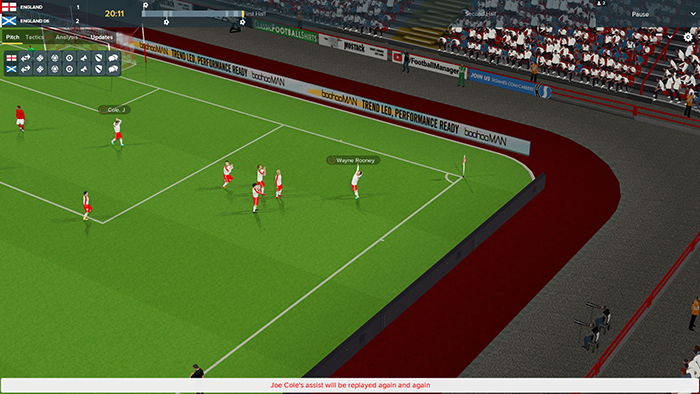 Both teams seem to retreat back into their shell for the rest of the first half: nothing of interest happens apart from Sterling’s two misses – he really should have hit the target at least – and Steven Gerrard’s audacious attempt from outside the box hitting the post just before the referee blows the whistle for the interval.

Young partially atones for his sins in the 62nd minute with a goal-line clearance, the first meaningful action of the second half.

Gerrard and Rooney try to pass their way through the defence as the clock ticks on, but Jordan Pickford easily denies them. The old boys hardly offer anything else going forward after this point, but they do an excellent job stifling the young guns, forcing them to take hopeless long-range potshots over and over again.

In fact, it’s England 2006 that are awarded two consecutive corners with five minutes to go, but they are easily dealt with.

The ensuing counter-attack from the second looks like England 2018’s best chance left to equalise, but Ashley Cole quickly dispossesses Trippier, then slows things down.

The final chance falls to Raheem Sterling. It’s straight at the keeper. 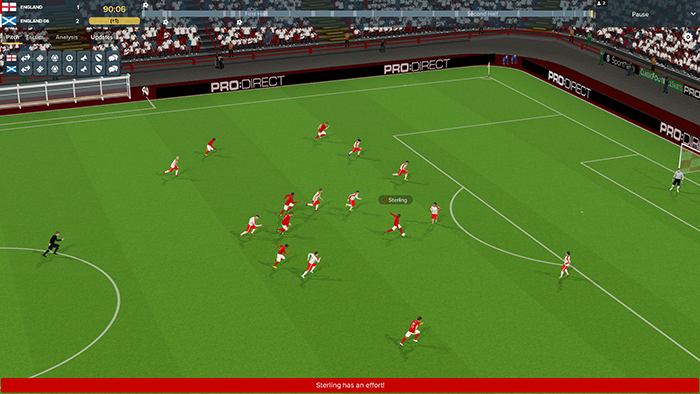 A close defeat against a star-studded side after an excellent start that is quickly undone by a mental short-circuit that leads to an individual error?

I should have been looping Three Lions in the background as I was simulating the game – this was a quintessentially English performance.