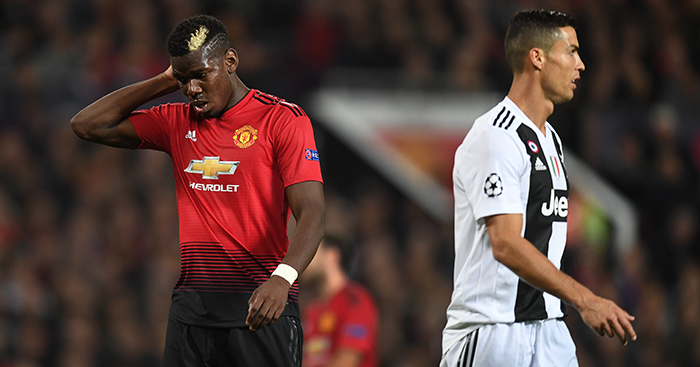 At the beginning of November, secret plans for a European Super League emerged as part of the German newspaper Der Spiegel’s ‘Football Leaks’ document.

Details of an email sent to Real Madrid from investment firm Key Capital Partners hinted that plans are underway for an alternative to the Champions League consisting of 11 of Europe’s biggest clubs (immune from relegation) and five initial ‘guests’.

But what would actually happen if the Super League came into existence? As ever, we took to Football Manager 2019 to find out…

Should the Super League ever come to fruition, some believe it would represent the first step towards the biggest clubs quitting their domestic leagues altogether to avoid ever having to share revenues with the small clubs ever again.

We simulated one full season, from June 2018 to June 2019, and took a look at the results, including what happened to the respective domestic leagues in England, Spain, Germany, Italy, and France.

To make up the numbers back home, clubs were promoted from the second tiers based on league position as of 27/11/18.

Not unlike their form in the Premier League, Man City started strong, were strong in the middle, and finished strong.

Pep Guardiola’s team led from the off, winning six of their first eight games and storming into a four-point lead by the midway point in the campaign. They won just under half of their games in the final 15 matches but still lifted the inaugural title by four points.

Strangely enough, it took until the third from last game of the season (0-3 v Atletico) for City to lose to a non-English team, reflecting the quality of England’s contingent: all five clubs finished in the top seven, with Man Utd the lowest ranked on 46 points.

The winning points tally – 62 from 30 games – was considerably lower than we are used to, which was thanks to the high overall quality. City’s 2.07 points-per-game would barely get you a top-four finish in the Premier League, and yet no other Super League club managed a two points-per-game average. Not a single club managed back-to-back clean sheets.

Arsenal finished second with 58 points, and then there was a pretty big drop to Real Madrid in third on 52. Just twelve points separate nine places from Real down to Atletico. 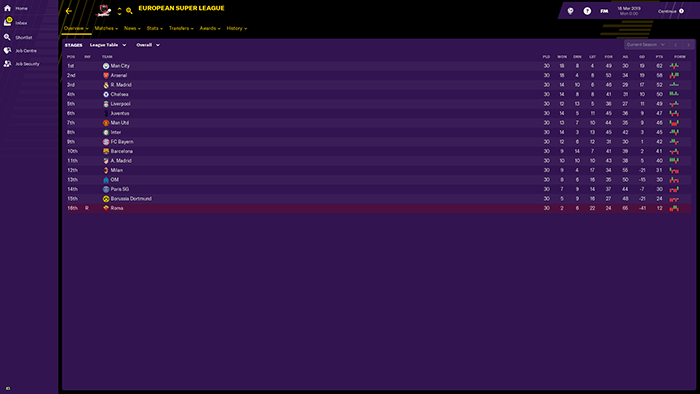 Roma were woeful, finishing on just 12 points having won a meagre two matches across the whole season, both coming in the final three games of the campaign. Clearly, they weren’t ready for the big league.

Replacing Euebio di Francesco with Peter Bosz in November didn’t help at all.

But the biggest disappointments were PSG, which would have been pretty hilarious for neutrals given the Qatar-owned club’s arrogance in dominating French football.

PSG were so bad – winning only 30 points and seven matches (including their final two) – that they resorted to hiring Rafael Benitez in mid-February. Results actually got worse after that.

Dortmund, meanwhile, finished one place off the bottom, a stark difference to real life. Lucien Favre was replaced by Michel Preud’homme in what was the third and final managerial change of the Super League season. 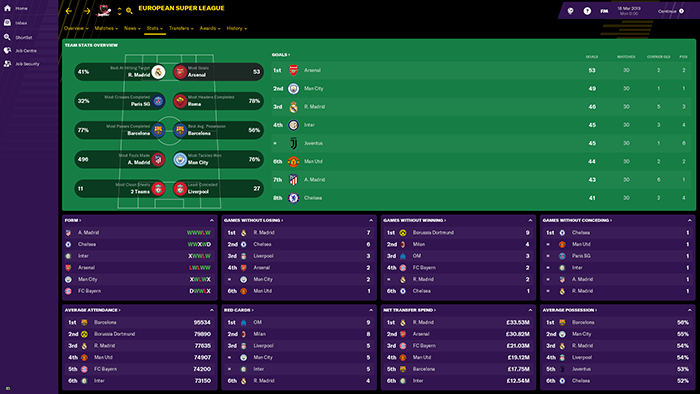 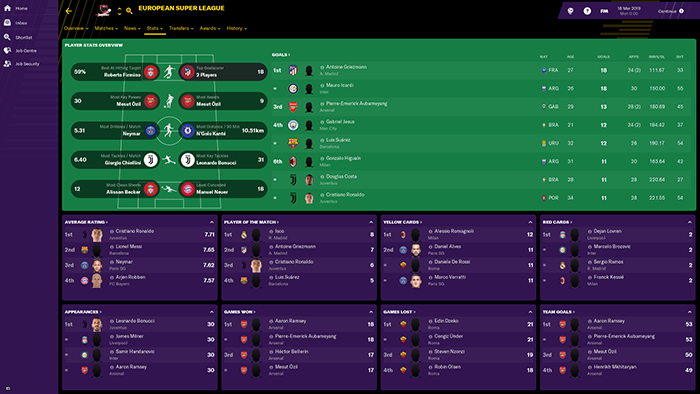 After a long struggle to reach the top of the game, Tottenham, Napoli, and RB Leipzig finally won a domestic title… but they were, of course, hollow victories.

They probably wouldn’t happen at all in real life anyway: any European Super League structure will likely have a second tier, in which all three of these clubs – plus our title winners from France and Spain, AS Monaco and Valencia – would surely participate.

Domestic success, then, would either be essentially without meaning for these clubs or it wouldn’t happen as they instead fight for a spot at the big table. In fact, a look at all five league tables is a sorry sight: the absence of Europe’s biggest clubs is extremely loud.

And so it’s big success for Manchester City, but for the rest? Well, it’s basically mid-table obscurity. There’s no higher bracket of European football to reach towards – rendering any finish below first pointless – and without relegation no danger either.

Meanwhile, domestic competition in England, Germany, Italy, Spain, and France looks and feels empty. Basically, football was ruined. For everyone.