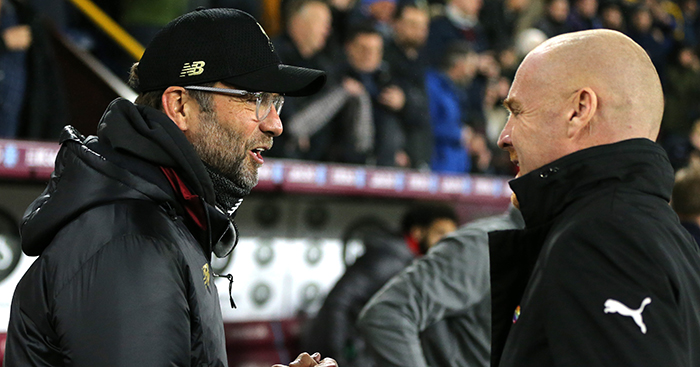 In the modern game, a club’s resources appear to limit their potential no matter who’s in charge – a theory backed up by the predictability of the 2018-19 Premier League table.

Already the division has formed into three separate mini-leagues, while Manchester City’s domestic dominance – and Pep Guardiola’s role in it – continues to be debated up and down the country.

S0 how much difference does a manager actually make? Would Guardiola do nearly as well if he had to work at the bottom end of the table? Would an overachiever like David Wagner be a success if given the reins of a top club? Oh, and what would happen if Neil Warnock was inexplicably given the Arsenal job? We took to Football Manager 2019 to find out.

Using the FM19 Data Editor we swapped the managers around for the current top five and bottom five of the Premier League (as of 06/12/18) and simulated an entire season of the game.

Matching clubs and managers in a mirror of their league position, the new arrangement looked like this:

Ranieri, title winner with Leicester City in 2016, was always likely to do well in charge of City.

The Italian is known as someone willing to change his tactics to the scenario he walks into (his adaptability stat is 18), which explains why Ranieri was happy to continue with a broadly Guardiola-esque system in 2018-19.

They won the title by 10 points, topping the charts for possession (58%) and goals (86), although there was a hint of classic Ranieri in there. No team completed more crosses than City’s  311, while Wes Morgan-esque Vincent Kompany started 43 matches in all competitions, including 28 in the league. 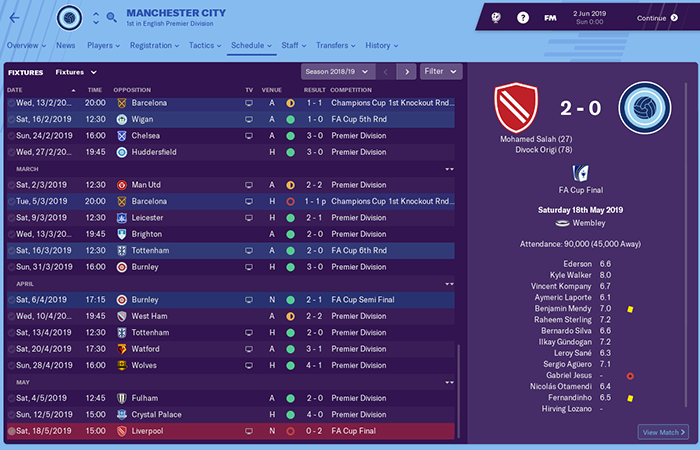 Mark Hughes had a much bigger impact on Tottenham’s philosophy. They might have finished second, with 82 points, but Spurs only managed to score 69 goals and drew 10 of their matches; it turns out Sparky is just as dull with Harry Kane and Dele Alli as he is with Charlie Austin and Manolo Gabbiadini.

It got peak Hughes at the start of the campaign when Spurs drew 1-1 in four out of five league matches between late August and late September.

Hughes has had his share of fails in the transfer market, but what he did at Tottenham was inexplicable. After years of tight purse strings Daniel Levy opened his chequebook, spending £90 million… on two strikers.

To be fair, Hughes was playing a no-nonsense 4-4-2 for most of the season, but with Harry Kane netting 33 Premier League goals it surely wasn’t the best use of funds. 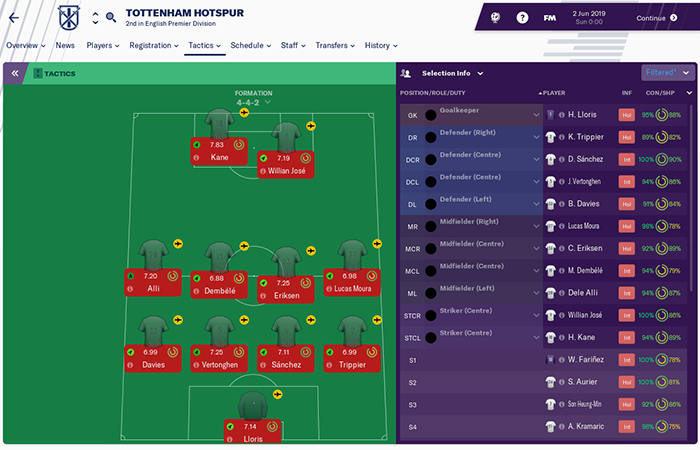 From Klopp to Dyche, Liverpool fans can’t have been happy. They, too, went with a Big British 4-4-2, with Mauro Icardi (signed in January) partnering Roberto Firmino most of the time, and defended pretty doggedly – which proved to be exactly what Liverpool needed to match last season’s achievements and reach the Champions League final.

Again they lost, again in devastating circumstances: Barcelona lifted the trophy thanks to an extra-time goal by none other than Luis Suarez.

Unlike Klopp, however, Dyche was able to deliver silverware in the shape of the FA Cup.

Wagner’s haul of 75 points was pretty disappointing in a campaign without much incident; the most intriguing thing being that N’Golo Kante, played in a two at the base of a 4-2-3-1, amassed 15 assists in all competitions.

With no discernible style and a pretty poor defensive record (45 goals conceded), Wagner is sacked at the end of the campaign after losing the Europa League final to AS Monaco in a penalty shootout. 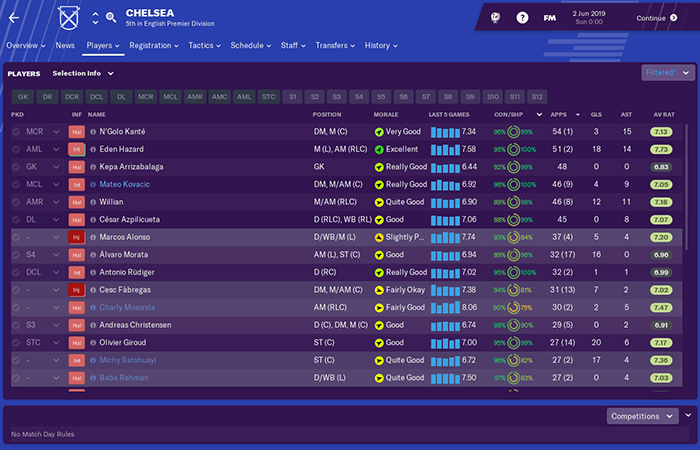 Well, this one was hardly a surprise. From Arsene Wenger to Neil Warnock, the culture shock was just too much for the manager and his players.

The 69-year-old was sacked in mid-March following a run of three successive league defeats that left them with 55 points from 30 Premier League matches which, in Warnock’s defence, is seven more than Wenger had at that stage the previous year.

What’s so pleasing about Warnock’s reign is that he actually tried to shift Arsenal towards a direct, long-ball approach. In his final game, a 2-0 defeat Liverpool, the Gunners held 38% possession as the central midfielders (averaging 70% pass completion) tried to pump the ball up to target-man Pierre-Emile Aubameyang.

Of the managers moved down Guardiola came out on top, taking real-life bottom club Fulham all the way to an 11th-placed finish. The Fulham squad was pretty well set up for Pep’s aesthetic football, although defensive issues obviously held them back.

Jean-Michael Serri and Tom Cairney excelled, which is hardly a surprise, although Aleksandar Mitrovic’s success – 19 goals in 40 games – came as a shock.

Guardiola managed to avoid a relegation fight by beating all the teams around him, with Fulham picking up just two points from 12 matches against the ’big six’. 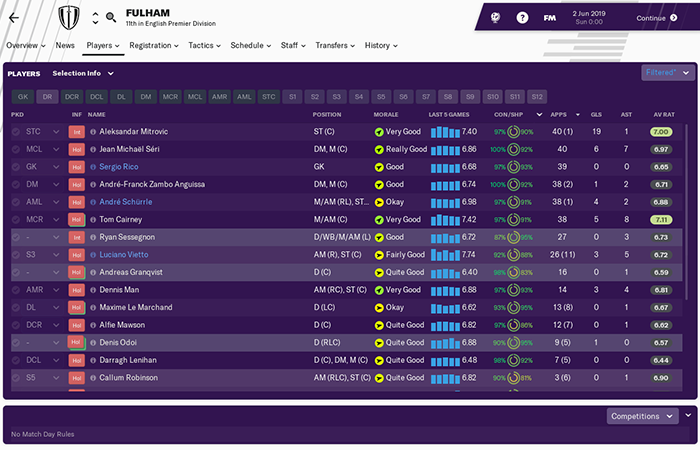 Sarri-ball at Huddersfield does make sense, and indeed they finished even higher than under Wagner the year before, winning 10 matches thanks to a typically Sarri fluid midfield three of Aaron Mooy, Jefferson Lerma, and Jack Grealish, signed in January.

Goals were still a problem (37 in total), but all in all it was an impressive first year in English football for Sarri.

Thirteen points from the first eight league games set them on their way before a steady decline in the latter stages of the competition as Huddersfield, like Fulham, struggled against anyone that wasn’t at a similar technical ability level.

A 2-1 victory over Arsenal in March, in which they out-passed Warnock’s team, was the standout result. 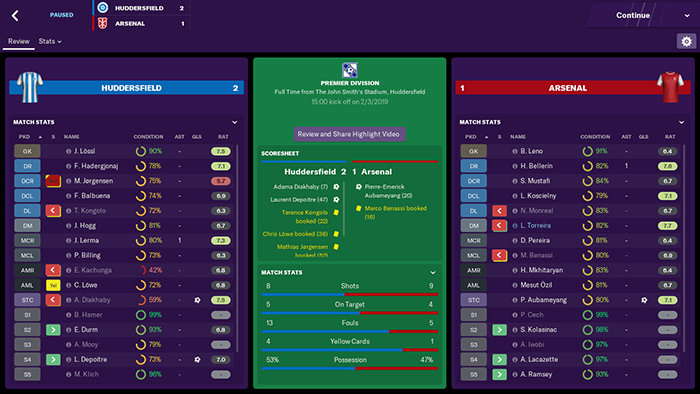 Level on points with Sarri’s Huddersfield, Klopp underwhelmed at Burnley – albeit if he performed better than the real-life Clarets so far this season. They were the division’s second lowest scorers with 30 in total, and never really settled into a coherent pattern.

Between February 2 and March 16, Burnley won eight and drew one of nine games. Maybe Klopp is just starting to work out how to make them tick.

How could we possibly know what Southampton would look like with Pochettino in charge? Thankfully, we have this simulation to find out… and Saints were pretty terrible under the Argentine.

They stayed up after winning on the final day, 2-1 at home to Burnley, which ended a winless run of 11.

It also took to matchday nine to record their first victory of the campaign, while their top scorer in the league was Danny Ings with eight.

It looks as though Southampton are so bad even Pochettino, who knows the club inside out, can scarcely fix them. Good luck Hasenhuttl. 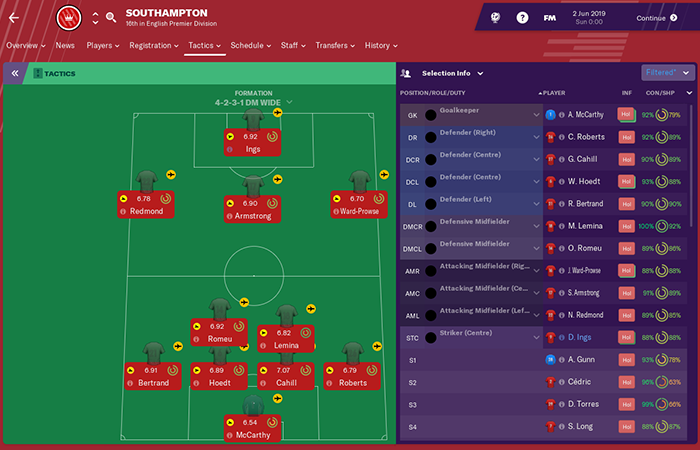 Every single club in our experiment survived relegation, even Emery’s Cardiff – by the skin of their teeth. The Welsh club didn’t win any of their final 10 league matches but were spared the drop by a single point: four wins from six in January and February was ultimately enough.

You can’t say Emery’s furious tactics exactly took hold in Cardiff – that drop off in form suggests a tiredness Arsenal fans will be worried about – but survival clearly constitutes success.