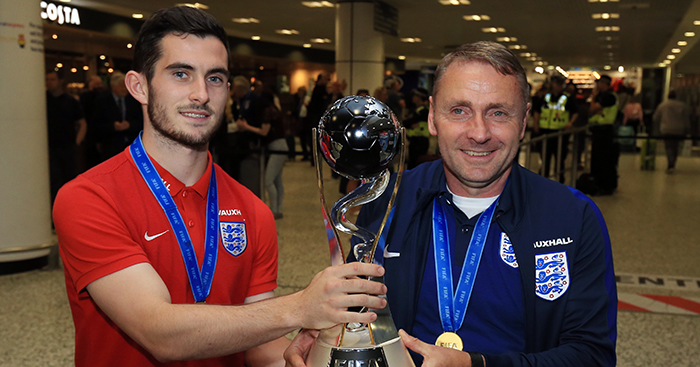 When England Under-20s won the World Cup in 2017 they were immediately hailed as a golden generation by our media – but what does Football Manager think the future holds for that team?

We simulated four years of gameplay on FM19 up until October 2022 (the eve of the squad selection for the next senior World Cup) to see what came of the 11 players who beat Venezuela in the final.

Where are they now? Are they still here or have the top European clubs poached them all? Did they come good? Why not? Who is to blame? What’s wrong with England? Why don’t we ever win anything? Do we ask too many questions?

England’s goalkeeper for the Under-20 World Cup hasn’t exactly gone from strength to strength come 2022.

It’s no surprise, then, that he hasn’t played much Premier League football over the past four years. In fact, just seven games for Newcastle in three years following a 2018-19 loan spell at Coventry City in which he played 19 times.

Woodman is third-choice keeper at the club, spending the majority of his time in the under-23s. 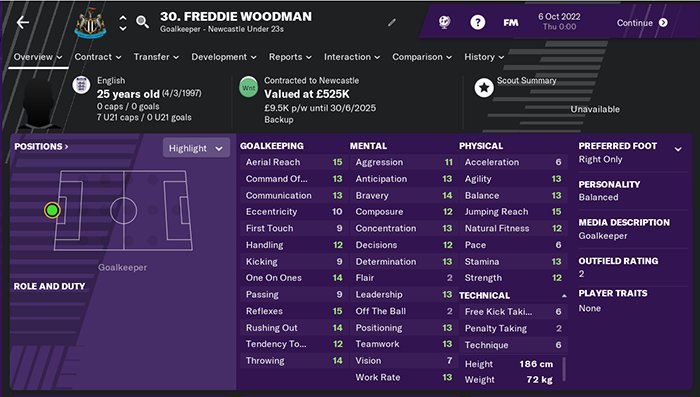 Clarke-Salter is on a similar level to Woodman, although in FM19 he decides to take action, signing for Derby County from Chelsea for £1.6million in the summer of 2020.

Prior to this he played relatively well on loan at Vitesse for a year and Ipswich Town in 2019-20. So far, Clarke-Salter has clocked over 90 league matches for Derby.

Mainly 12s and 13s make the 25-year-old a decent but uninspiring footballer on the game. His leadership (14), teamwork (13), pace (15), and stamina (15) point to a commanding presence at Championship level.

There is a remarkable similarity between the career trajectory of Clarke-Salter and Tomari, another Chelsea youth product who had to move down a division for first-team action.

Tomari was a regular starter on loan at Derby in 2018-19 and then Nottingham Forest in 2019-20, before signing for Middlesbrough for £1.4million. Since then, he has forged a solid carer in England’s second tier.

Clarke-Salter and Tomari are basically the same player according to FM19, which suggests Sports Interactive have been a tad lazy in their scouting of Chelsea’s academy.

Hovering higher up the pyramid, though only just, is Spurs graduate Walker-Peters. He is a pretty decent right-back with teamwork (15), work rate (15), and stamina (15) stats to suggest he will run up and down proficiently, while his tackling (13) and technique (13) are certainly good enough for a Premier League relegation candidate.

Instead, Walker-Peters finds himself at Bayer Leverkusen and playing only four or five Bundesliga games per season. This follows successful loan spells at Middlesbrough and Fulham.

Valued at £19.25million, the right-back certainly has the chance to make a name for himself in his late twenties. 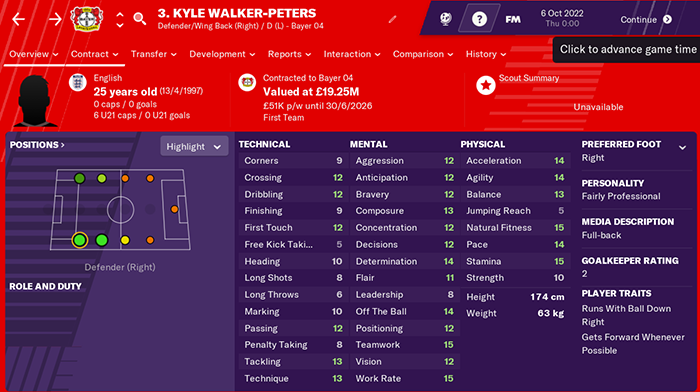 FM19 clearly rates Everton right-back Kenny, who, as we approach the 2022 World Cup, has 113 career Premier League appearances under his belt.

Having played roughly half of matches in his first three seasons of the game at Everton, Kenny then signs for Premier League Stoke City for £13.75million and is a guaranteed starter.

That comes as no surprise given his very good mental and physical attributes, including determination (16), leadership (16), work rate (17), and agility (16).

Kenny doesn’t have any real weaknesses, and to be fair will probably get a bump to a higher Premier League level over the next few seasons.

The Football Manager team have been keen on Lewis Cook for several years now, so it’s no surprise to see him go from strength to strength in this year’s game.

With excellent technical attributes such as tackling (15), first touch (16) and passing (16), as well as impeccable physical and mental attributes, Cook is one of the best buys on the game – and valued at £59million by 2022.

He starts regularly for Bournemouth until 2021, when Manchester United sign him for £65million. Cook already has 18 caps and seems destined to make it to the 2022 World Cup squad. 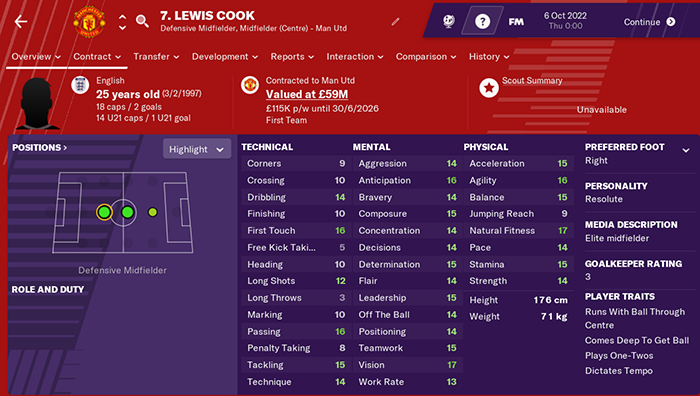 Things have gone fairly well for Calvert-Lewin over the past four years, although it is unlikely he will ever reach the top of the game and, as of October 2022, he is yet to earn his first England cap.

Calvert-Lewin played on and off for Everton before Premier League Leeds United signed him for £17.25million. He has 14 goals in 47 games for his new club.

That’s not a bad record, but it ought to be better. His finishing (15), work rate (15), determination (16), and stamina (16) are all pretty good, and Calvert-Lewin has pace, too. He thoroughly deserves a valuation of £26.5million.

Onomah doesn’t get another game at Tottenham Hotspur, instead getting tossed between Championship clubs – Sheffield Wednesday, Bristol Rovers, Norwich City – before landing at Swansea City on a free transfer in 2021.

Onomah chose to play for Nigeria in the end but is yet to win a cap.

He only has three attributes rated 15 – flair, acceleration, and pace – while the rest are floating between 12 and 14. That’s about right for a decent Championship player, as his £4.2million rating would suggest.

Following his £19million move to Bournemouth, Solanke spent the next three-and-a-half years in the Premier League on the south coast.

It was pretty unconvincing, mind, with 17 league goals in 81 games. Huddersfield Town spent £20million on him in January 2022, getting relegated that summer.

Solanke is very much a Championship-standard player, with finishing (14) first touch (14) and technique (14) that locks him outside the elite. 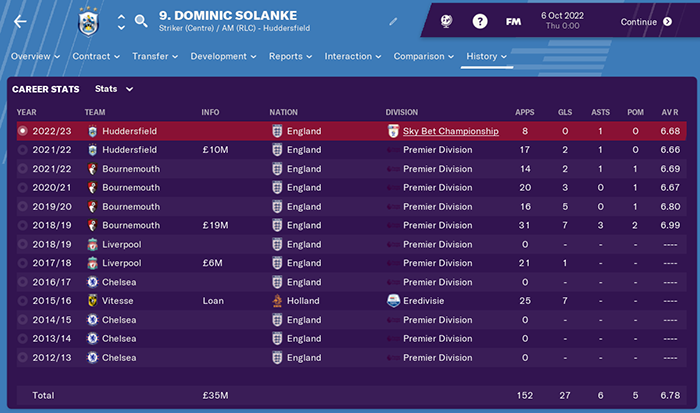 He has stayed at Everton throughout the game, featuring in about half of the Premier League matches played over the previous four years.

Things should be going better for Lookman based on those stats, so a big move abroad – followed by regular first-team football – is quite likely. As of 2022, he hasn’t received a single cap for his country.

The maverick of the group appears to be Everton’s Kieran Dowell, who spent a couple of years on loan at Championship clubs Middlesbrough and Sheffield United before leaving the Toffees for MLS.

Dowell plays for Houston, racking up 45 senior league appearances in just 18 months at the club.

He hasn’t got an England cap either, and playing at that level he is unlikely to get one either. His best attributes are long shots (16), composure (16), and vision (14).