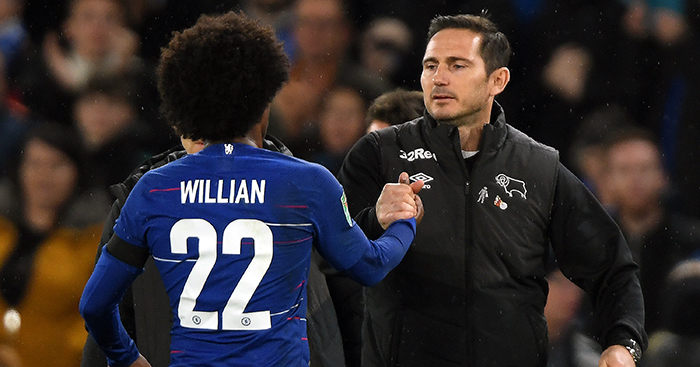 The end appears to be near for Maurizio Sarri at Chelsea – with Zinedine Zidane and Frank Lampard reported to be the leading contenders to replace him at Stamford Bridge.

Following a 2-0 defeat to Manchester United in the FA Cup it looks as though Roman Abramovich will soon dispense of the services of Sarri, who after a strong start at Chelsea has proved to be either: a) an inflexible tactician unable to motivate his side or b) the victim of a half-baked experiment by a club desperate to mimic Manchester City but without the hard work, laying of foundations, or financial investment.

Whichever theory you believe, the message from the fans – and reportedly some of the players – is clear: it’s time for someone else to have a go.

So, as is our way, we thought we’d humbly offer our services to Abramovich with a bit of Football Manager research to help him decide who should replace Sarri.

Using Football Manager 2019 we gave Zidane, Lampard and Diego Simeone, a long-time favourite of Abramovich, the chance to manage Chelsea for the entirety of the 2018-19 campaign to see if anyone can do a better job than Sarri has managed thus far.

Zidane’s Chelsea always looked like they were a tier below the elite; flat-track bullies who couldn’t hack it in the big games. The season began with an ominous 3-0 defeat at home to Spurs, and in the first seven games they lost twice more: 1-0 to Liverpool and 4-0 to Manchester City.

Things snowballed from here as Chelsea lost half of their opening 12 Premier League matches, putting pressure on this oddly tactic-less Zidane team.

Chelsea then won 28 points from their next 12 games, a sequence that restored faith in the Zidane Project…but even in this period the Blues lost to Arsenal and Manchester United, compounding the theory that Zidane just doesn’t have the tactical nous to outthink the big clubs.

And then it all crumbled to dust. Ambling, directionless performances returned as Chelsea laboured through February, losing every league game before a 2-1 defeat at Everton sealed his fate.

Eventually, Chelsea were much harder to beat and eventually, Simeone’s fiercely reactive football took Chelsea into the Champions League.

But had the Argentine made a faster start to life at Stamford Bridge he could have repeated Antonio Conte’s achievements; the Blues finished the season just four points behind winners Liverpool.

Simeone did a reverse Sarri, winning a mere 15 points from his opening nine matches before clicking into gear for the remainder of the campaign. An 11-match winning streak through February and March saw Chelsea rise towards the summit of the table, but ultimately results against fellow Big Six clubs cost them, just as it had Zidane.

Chelsea finished the season with a respectable 78 points, losing in the FA Cup final to Liverpool and winning the Europa League by beating AC Milan on penalties after a peak-Simeone 0-0 draw.

The trajectory clearly upwards, there is no doubt Simeone’s first season was a big success.

It was a season in three acts for the people’s choice Frank Lampard: a Mourinho-esque start to make everyone giddy, a (different kind of) Mourinho-esque collapse in the middle, and then a rebirth at the end.

Chelsea finished sixth and trophyless, but only eight points off Simeone’s total with 70. Lampard is understandably treated with more patience than Zidane – or Sarri, for that matter – and by the end of the campaign it looks as though he may just have sussed it.

But things nosedive dramatically after that as Lampard wins just three of the next 12 domestically, the trough being a winless March in which Chelsea exited both the Europa League and the FA Cup.

Zidane or Sarri would have gone by the time Lampard reached April having failed to win a single league game since January, but his years of service give Frank a second chance.

Chelsea lost only one of their final nine games and, crucially, beat Man City 2-1 at the Etihad on the final day. Lampard has turned a corner and the future is bright, or at least that’s what everyone wants to believe.