FM20 sims the PL season with Arteta, Jose & other new bosses in from start 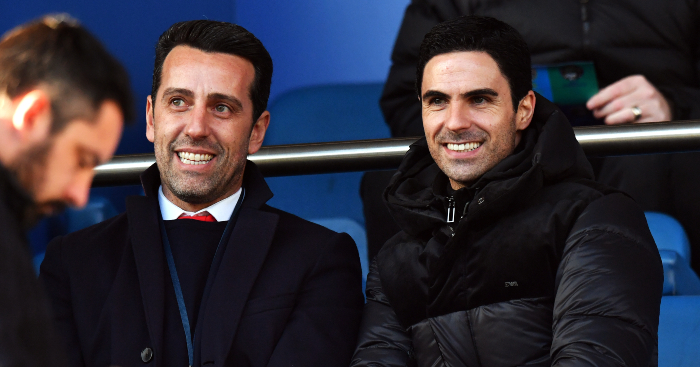 Arsenal, Tottenham, Everton and Watford have all attempted to improve their fortunes by appointing new managers – but what if they’d made those changes back in the summer?

Only four Premier League clubs have changed manager so far in 2019-20, which is just below average in recent years, yet it is hard to remember a season in which so many high-profile switches have taken place. Arsenal and Tottenham in the space of 30 days is quite something, while Carlo Ancelotti’s appointment at Everton is a huge story.

But it is trumped, of course, by Jose Mourinho replacing Mauricio Pochettino at Spurs, which was one of the most surprising managerial changes in Premier League history.

Watford are the fourth club to reshuffle, and they’ve done it twice. Poor Quique Sanchez Flores only lasted 12 games before Nigel Pearson was parachuted in.

So we decided to fire up Football Manager 2020 for the first time this season to find out what would have happened if Mourinho, Ancelotti, Mikel Arteta, and Pearson were all in charge for the whole of 2019-20.

Here’s how they got on.

When Arsenal fired Unai Emery after the Europa League final defeat and swiftly replaced him with Mikel Arteta, fans expected swashbuckling possession football in the style of Pep Guardiola’s Manchester City. Instead, Arteta took a long hard look at the qualities of his playing squad and surprised the Premier League with some resilient, defence-first tactics.

The main headline is that Arsenal finish the campaign comfortably in third, safe within the top four by nine points, yet it is hard not to focus on the system that got them there. Arteta’s side conceded the second fewest goals in the division, 29, and scored just 58 themselves – their fewest since 1996 under the infamously boring George Graham.

In a defensive 4-1-4-1, Arteta’s side ground out plenty of 1-0 wins against mid-table opposition. It was hardly convincing but certainly enough for supporters to get behind his long-term vision. Then again, a thumping 3-0 win at Spurs in February was probably the only memorable thing about a campaign in which young players barely featured and Arsenal went out of all the cups early on.

That’s not how we expect things to go in real life. Do Sports Interactive know something about Arteta’s master plan that we don’t? 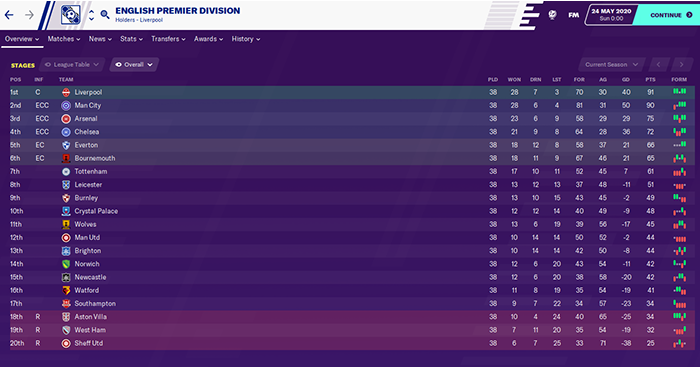 Ancelotti was undoubtedly the best appointment of the four, lifting Everton to fifth – and just six points shy of the Champions League places – in his first year at the helm. The Toffees were never really in the race for the top four, however, instead arriving late with a flurry of good results that bodes well for a successful 2020-21.

Everton clanged around as expected in the early months, their yo-yoing form (just one draw until December) highlighting the lopsided nature of the squad and some inevitable teething problems.

Things threatened to turn sour for Ancelotti in winter as Everton picked up a solitary point in January, but his reputation gave the Italian more time than others would be afforded. The board were patient and got their reward.

Everton won 29 points from the final 14 games of the season; that’s top-four form. Moise Kean came to the fore in that period, ending the year on 12 goals, while Alexi Iwobi and Lucas Digne also played crucial roles in an expansive 4-2-3-1 formation.

Evertonians will be delighted and truly optimistic for the first time in years.

Should Pochettino have walked after the Champions League final defeat? FM20 has given us a pretty definitive answer: no.

Mourinho needed Pochettino to bear the weight of the early season failure in 2019-20, needed physical evidence Spurs were rapidly declining. Without it in FM20, Mourinho was blamed for the drop off and within 24 hours of losing the FA Cup final to Chelsea was sacked by Daniel Levy.

Winning five points from the first four games of the season gave Mourinho and Spurs a mountain to climb. On four separate occasions they went on six-game unbeaten streaks in the Premier League, and in fact a top-four finish looked likely until a sudden collapse in the spring.

But collecting just eight points from their final nine league games, it became impossible to ignore the fans’ cries for more attractive football.

Mourinho’s three-year cycle had been condensed into one season: the initial transition, the good form, and the collapse, all in eight months. Negative, low-scoring football will not fly in north London unless results are good. Let that be a lesson. 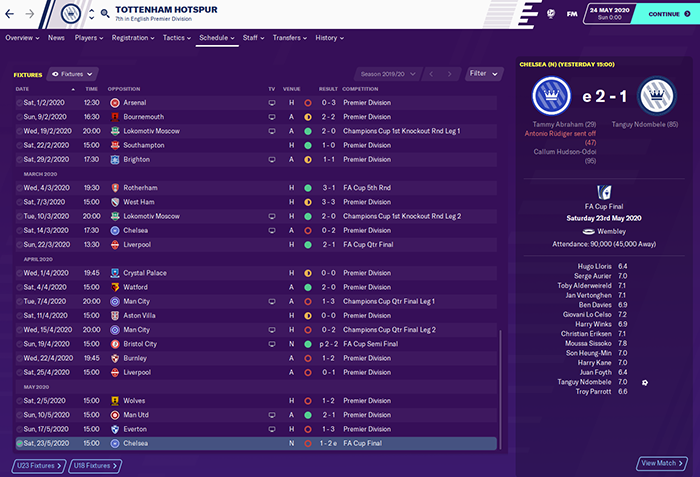 It turns out Watford’s decline was inevitable after all, as so many fans will have predicted after years of neglect in the transfer market. Pearson lasted just 16 matches in the hot seat, winning only twice, and was sacked on November 30 with Watford in the bottom three on 11 points from 14 games.

That isn’t exactly a terrible record, but then again Pearson was never the most ambitious appointment and consequently had little chance of surviving a rough patch. That Andre Villas-Boas and Patrick Vieira were the two favourites to replace him shortly after a 2-1 defeat to Brighton explains why the board pulled the trigger so quickly. Pearson left the club with only bad memories, save a 2-0 victory at home to Manchester United.

Watford hired Aleksandrs Starkovs in the end, a Latvian coach with very little experience outside his own country, and finished 16th on 41 points.