FM2020 series part three: Houston, we have lift-off – and lots of problems 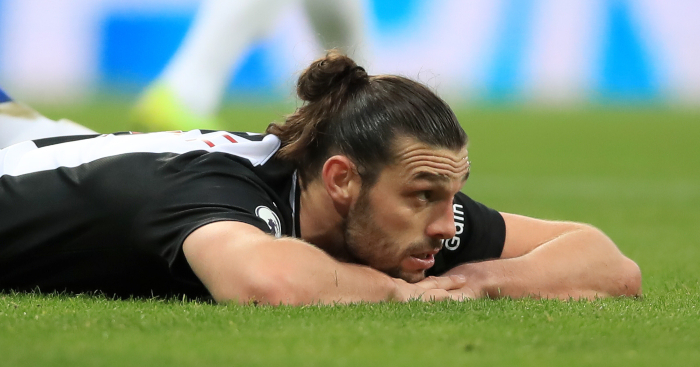 Jacque Talbot has taken on the challenge of replacing Steve Bruce as Newcastle United manager and is trying to do something which has so far proved impossible for humankind: lead the Magpies to glory under the dastardly ownership of Mike Ashley. After a tough pre-season and defeats in his opening two Premier League fixtures, he’s already starting to feel some sympathy for Bruce…

Everton and Chelsea were no easy games by any measure. I wasn’t expecting to get six points, but what’s worrying is that we’re yet to score, or even play particularly well.

I am still hanging on to that 7-0 preseason win over Stenhousemuir; no doubt that historic victory for the club has already been forgotten by the supporters and board.

Then Derek Wright, our head physio, messages me: “It’s happened.” My heart sinks – Andy Carroll is indeed injured. It was bound to happen at some point. Guess I’m lucky it occurred early, plus he’ll only be out for a single game.

At least I can look to Paul Dummett for reliability. “My ever-faithful Paul,” I say, warmly looking into his eyes and stroking his chin after he informs me that he’s retired from international football to focus on the club. It’s this type of sacrifice I need from the players.

On to our home game against Bournemouth. It is actually a 19th versus 2nd clash. Callum Wilson is on fire, averaging a rating of 8.00 per match. I could do without facing that kind of form.

In our pre-match discussion, I tell the players, as Eddie Howe seems to think its 2003 and is playing 4-4-2, over-run the middle, keep the tempo high, be expressive and direct; but also kick the shit out of Wilson when he gets through. Most importantly, however, let the roars from the sea of Black and White supporters course through your veins and absorb it into your spirit as you play. They have no particular reaction.

Valentino Lazaro goes in at right-back, Joelinton up front. Allan Saint-Maximin is now match fit, so he’s in, too.

I could’ve had better starts. After 20 minutes Lazaro gets a knock, Saint-Maximin pulls his thigh, and Bournemouth score.

Something works. Joelinton goes on a run and then bang. 1-1. Great goal.

In the second half, we’re playing too cautiously. I throw intricate footballing tactics out the window: attack, attack attack. I want the win. I need the win.

I don’t get the win. It ends 1-1. But our performance was much improved in the second half…and we scored a goal, our first goal of the campaign. Also, Lazaro and Saint-Maximin are out for only up to two weeks. Not so bad.

DeAndre Yedlin, the American Typhoon, has started full training again. But he seems to have grown delusions of grandeur while he’s been away. He says his desire is to play in Europe and starts to go all Philippe Coutinho about moving to Lille, who have put in a £10million offer.

My offer of a pay rise angers him even more – apparently, success counts more than money to him. What a strange man. Either way, I reject the offer and tell him he’s staying put.

The League Cup next is up next, and it’s Rotherham. If the team don’t comfortably win this game – and yes, I am going to be fielding my best XI available – then the players really need to take a long hard look at themselves.

Leigh Griffiths comes in for Joelinton leading the line, as I feel he needs to get off the mark to boost his confidence.

We start well but Danny Rose goes off injured. At half-time it’s still 0-0. I go attacking. Griffiths scores a decent header. Thank God. He follows that with a penalty and to secure a 2-0 win.

But it could have been better. I tell the players so after the match and some of those fickle snowflakes become demotivated.

What is said in the dressing room should remain there, but Griffiths starts moaning about how I conducted my team talk post-game. I refuse to relent; yes, we did win, but we didn’t create enough chances as we should against a lower league side. I tell him to get over himself but he carries on, saying he’s not sure he can work under a man who manages the way I do. We’ve only known each other a couple of months but we’re already nemeses.

We draw Tottenham at home in the next round so that’s probably the end of that campaign anyway. 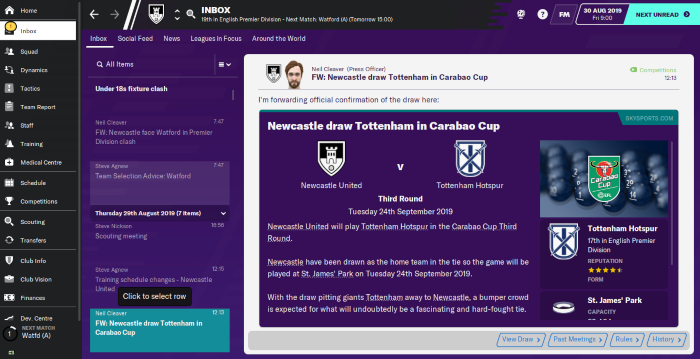 As if there weren’t enough players on the sidelines, I find out Rose is out for up to six weeks. I’m tempted to drop Griffiths completely for Watford away after his bitchfest. But alas, I am not going risk having no pace up front against these lot. Sometimes you have to put points before principles.

Saint-Maximin scores after five minutes in the perfect start. But then we drop off and – argh! I let out a shriek. Jetro Willems, on 20 minutes, get injured. I tell my beautiful Dummett to come on in his place but remain conservative in his approach. Before half-time Watford equalise. 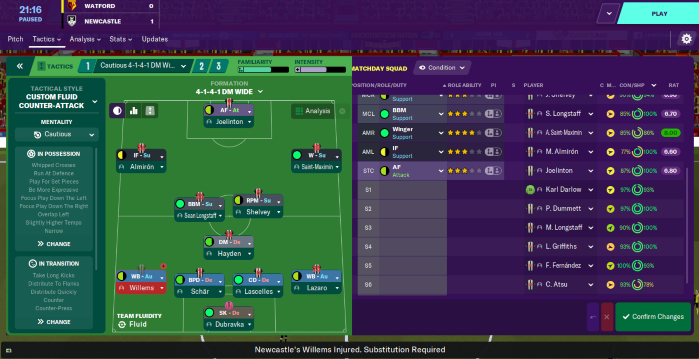 It’s all very dour, that’s until Miguel Almiron goes off injured. This is almost laughable now, beyond pain.

Christian Atsu comes on as I am not going to sit back. All-out attack in the final five minutes. A cross from Sean Longstaff. It misses the treacherous Griffiths, who I’ve been scowling at most the game, and lands to Atsu. Out of nowhere, he lands a close-range finish! At the death! Our first win in the league!

Almiron is only out for a few days but Willems for several months. On the injury front, we really are quite screwed. I figure there has to be something in the system we’re implementing, but it seems not. I drop our training intensity regardless.

I hold my breath throughout the international break. Thankfully, the players come back unharmed.

The next week’s training is attack-focused, but not high intensity by any measure. That doesn’t stop Isaac Hayden damaging his upper leg and thereby missing the upcoming home game against eighth-placed Aston Villa.

You would think I’m angry but in fact, I just think it’s quite funny the cocky southerner, who only two days prior had complained about the training load being too light, has now done his leg in. “Deary me, Isaac. I hope the irony is not lost on you,” I tell him.

Speaking to the press, Les Ferdinand warns of Mbwana Samatta, Aston Villa’s new signing who’s got four in four. Thanks, Les, but I think I can manage scouting my opposition. They play quite centrally, so I go for the same formation against them, but with Sean Longstaff in the holding position.

In the first half, my supposedly trusty Dummett concedes a penalty and Samatta converts.

In the second, Shelvey gets a second yellow and is sent off. I put Federico Fernandez on at left-back as Dummett is misplacing passes now. I tell them to remain deep, while the rest go and get an equaliser. The uber-defensive backline might have worked but Fernandez gets injured after five minutes of playing, not too long after Villa get a second.

That’s it: Route Three, 3-4-2. Please get something. Do something. Something happens. Atsu comes on. He goes on a wild run. Past one, now two. Then he shoots straight at the keeper. Was that even a shot? It went so slow it looked like a pass.

It’s a 2-0 home defeat to newly-promoted Aston Villa. They had 23 shots, 12 on target. I am not going to tell you how many we got.

Down to 17th. An array of injuries, some of the players hate me; the rest don’t even respect me. I know what you’re thinking – but no, I am not going to be defeatist. It’s back to the drawing board and, with some luck, we could see a revival.

We’ll need it. Our next four games include Manchester City, Liverpool and Spurs.