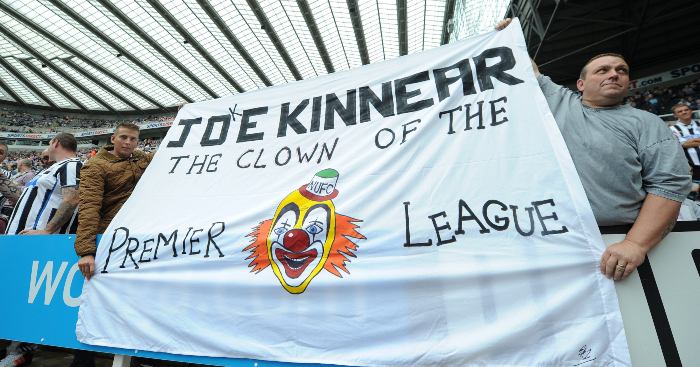 We thought things couldn’t get any worse. We were wrong. Does Mike Ashley really care about Newcastle United‘s results? Jacque Talbot is putting that to the test in the latest instalment of our Football Manager 2020 series.

The cafe’s smell of grease is so powerful it turns my stomach. To distract myself, I start playing with the salt shaker, moving it from my left hand to the right one, all in a crippling state of anxiety.

Finally, he arrives and sits down. A cotton scarf covers his face. Of course, he does not want to be recognised; not here anyway.

I explain what’s going on, how I have tried everything but to no avail, how the players have even started a mutiny against me, and how the board are not backing me. “It’s all everyone else’s fault, you see?”

He takes a long sigh, adjusts his glasses, before leaning onto the table between us, speaking in a hushed but firm voice.

He delivers me some home truths. Some of which are fair, some of which I disagree with. But even in criticism, his Spanish voice is warming.

After a while he says he must leave, his plane back to China is setting off soon. It’s disappointing. I have not got nearly enough information.

But just as he strolls past to the exit door, he drops me an envelope. I open it. “Merry Christmas,” it says inside. “Odd. It’s not even Halloween,” I think.

I open it up and find a festive tree inside with baubles. Underneath it says, “Some help.” I think for a moment, then my eyes light up. “Thank you,” I whisper lightly. “Now I know.”

That’s right! It’s ho ho ho, muthaf*ckas – I am changing the formation again, to – if you didn’t guess already – the Christmas tree formation; 4-3-2-1. Our prayers have been answered, it’s perfect, with thanks to my covert little helper.

So it will be Joelinton, who is back from injury, with Miguel Almiron and Allan Saint-Maximin behind; meaning our two best-attacking players in their favourite positions.

At home to Sheffield United, we can only muster a 0-0 draw, but I am not deterred. Some spring cleaning is still on the cards.

Assistant manager Steve Agnew has been attending our press conferences lately and saying some pretty awful things, complimenting the opposition, bringing our club – and more importantly, me – down in general. I decide enough is enough. I sack him. It’s been a long time coming, in fairness.

Mike Petke, an American known for his man-management, comes highly recommended and signs for us. And so a new era begins. 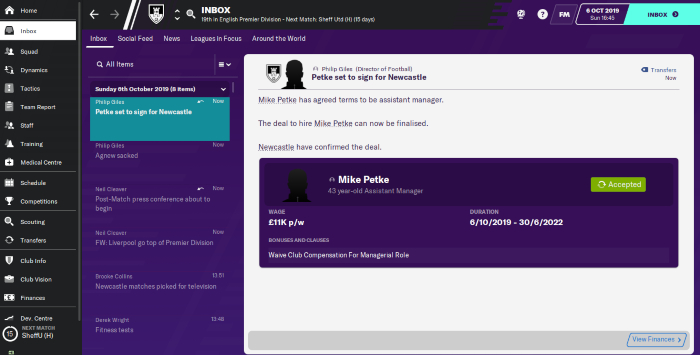 We’re 19th in the Premier League and have the third-highest amount of injures. It appears the players are hoping to climb that particular table as DeAndre Yedlin gets injured again, for some three weeks, after twisting his ankle on international duty. Meanwhile, Emil Kafth is injured for two to three weeks after a strain. Good start.

I then receive a delightful news article which says I am on the verge of sack. I start to panic but soon convince myself that I need to trust in the new system and eventually things will start to turn our way. 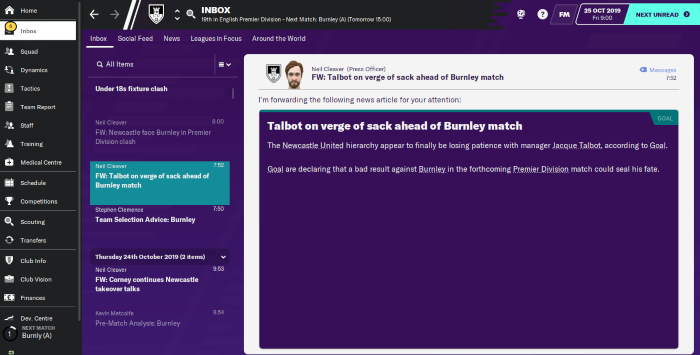 And what better way to make a turnaround than at Turf Moor, against the club who sit 20th.

Almost immediately after the opening whistle, wing-back Vincento Lazaro gets a knock and so Paul Dummett replaces him. Still goalless, I push Almiron and Saint-Maximin up front because, with 70 minutes on the clock, we’ve still only had two shots on goal.

I tell the players to be more direct and for a while, it’s all pointing in our favour, but then Chris Long scores, latching onto a deflection.

Saint-Maximin then goes and scores a wonder goal as we regain the momentum. I tell everyone to push up. Soon, Danny Rose runs inside the box and is tripped!

This is it, the foundation we have all been waiting for. Five minutes from time, Jonjo Shelvey steps up to the spot, to get the win, to save my job. He shoots – but it’s saved. Fuuuuuuuuuck!

That’s a wrap. That’s done. The question is: am I?

Lazaro’s injury isn’t long term, which is the good news, but the fact is we are now without a win in five, while news of a takeover isn’t helping matters. Should it be complete, they will likely have me gone, probably showing some actual ambition.

At least we have Liverpool in the League Cup next. The hope is that they will put out a weakened side as they focus on the league title. (Will Jurgen Klopp even be in the dugout for this one or will he take a holiday?)

At least the team is working together. Training has improved and an injury assessment shows risk is down 9%. But the good news is spoilt as that disgraceful man who calls himself a professional footballer, Leigh Griffiths, does a no-show to training. I think about dropping him completely but I really am down to the bare bones in the attacking department, the sole reason I bought him.

Liverpool do indeed opt for their second XI but still gave the big bad Virgil van Dijk a runout at St James’ Park.

The game starts, I suck on a deep breath but there’s not even time to exhale before Rose trips Divock Origi. Fabinho scores the subsequent penalty.

Liverpool continue to bombard us, the humiliation even worse considering they are basically playing their reverses. Origi gets a second. Then Lazaro gives it away and he gets a second. What a shower of shit this really is. (Genuinely annoying me now, this.)

Sadio Mane gets a fourth. Then Henri Saivet bombs forward and hits the post for us. It finishes at 4-0. Oh well, at least they didn’t take over 40 shots against us like last time. 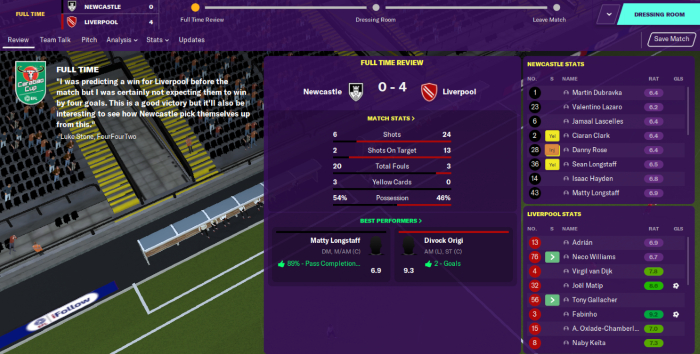 I find out after the match that Rose is injured for just over a week because of his thigh and will miss our next game.

In training, Paul Dummett gets injured, up to two months with a hernia. A HERNIA! Didn’t realise he was a 73-year-old recreational badminton player.

My monthly review comes in and the board, who have probably just scrolled through our latest results on BBC Sport the night before, are “deeply saddened” by my performance so far.

We head to the game at home to Spurs with both mine at Jose Mourinho’s job on the line (they’re 17th).

Son Heung-Min scores, then towards the game’s end, Jan Vertonghen scores a header from what was probably their 15th indirect freekick from the right. I consider making a substitute but conclude I’d rather punish the players by way of exhaustion until the end of our eventual 2-0 loss. I am not attending press conferences anymore. I just want to crawl into a hole.

We go for the same formation and line-up away at West Ham, only this time Shelvey is in. Fabian Schar goes to left-back as we don’t have any other choice; astoundingly, Rose is injured once more after jumping for a challenge in training. I am starting to believe that players are deliberately damaging themselves to get out of playing for me.

We are defending well…that’s all I can comment on, as there is no attack to speak of. We are just shutting them down, particularly on the left side. If anything, my time in the north-east will be remembered for once brilliantly putting Schar at left-back by default for a game against a midtable Premier League side and him playing quite well.

On 85 minutes, Mark Noble scores. Then Felipe Anderson gets a superb second. I must be done now: I am gone, surely. And if I am not gone, I should be. I am making Joe Kinnear look reasonable.

Indeed, the final whistle goes and we barely get to the next training session before I hear that Yedlin is injured again, this time three to six weeks. 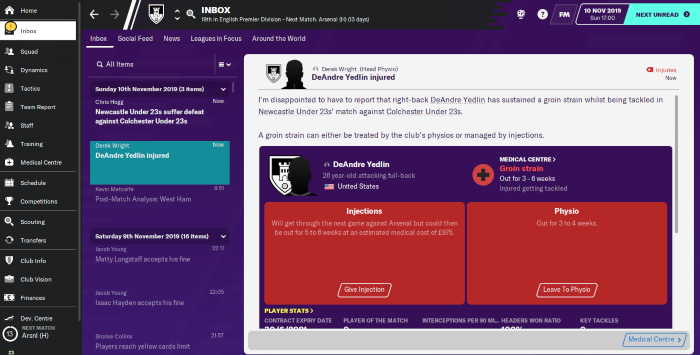 Emi Buendia’s header on 90 minutes in our must-win-or-face-certain-sacking-game against Norwich City means we now drop to 20th.

We snatch a draw against Arsenal, 1-1, and somehow I survive for the game against Leicester City at home.

The Foxes – those sneaky, disease-infested, damn vermin creatures – bang five against us. It’s all too much. Now I just want to be sacked.

After the game, I walk straight out. I am not talking to any player after that performance. I ignore Petke’s advice of sympathising with the players after a well-fought 5-0 loss because it’s laughable. But during the drive home I seriously ponder whether the man might generally need to be forcibly taken away for medical assessment.

Who hired this guy? In fact, whose idea was it to deploy a Christmas formation? What lunatic conjured that up? Rafa Benitez, that saboteur, that’s who. I see through it all now.

On social media, there is an abundance of calls for me to change the formation and tactics. Have these morons not been paying attention? Change doesn’t work, nothing does. St James’ Park sits on an Indian burial ground, I am sure of it.

But despite everything, after even yet another graceless defeat, I am somehow still in a job.

Either way, we draw table-toppers Liverpool in the third round of the FA Cup and this pretty much sums up our campaign so far.

FM2020 series part four: Newcastle, I love you but you’re bringing me down

What happened to Newcastle icons Xisco and Nacho Gonzalez?