FM2020 series part four: Newcastle, I love you but you’re bringing me down 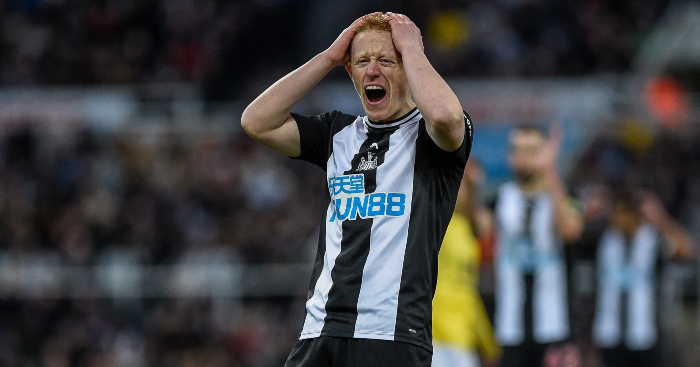 In the latest instalment of our Football Manager series, rookie Newcastle United boss Jacque Talbot, with his back against the ropes, has to tussle against some of the Premier League’s top sides. Meanwhile, a transfer saga starts to unfold.

We have to win some games. It’s a must, otherwise…well, I don’t really want to think about ‘otherwise’ right now. Let’s just say being sacked after our next two games isn’t beyond the realms of possibility.

On the plus side, Dwight Gayle is now involved in full training.

We need to go back to the drawing board – literally. A club meeting, all players – and I do mean all – need to attend, even if that means some have to come on stretchers.

Right: Route One will now be a 5-3-2. I’ll have Allan Saint-Maximin up front with Joelinton. Miguel Almiron will be positioned in the centre of midfield with the instruction to carry the ball forward, while one of the two remaining midfielders will pull back to help out the backline. The other will act as an auxiliary midfielder, helping in both defence and attack, depending on our transition.

We will run at the opposition because we have skilful players in attack. We will be expressive, utilise the counter, and we will be continuing our mantra of playing like shithouses, getting stuck in wherever possible.

With DeAndre Yedlin almost fully fit we can really gain some width when we push forward. Danny Rose will be back to his former self soon too, I am sure.

There they are: the tactics and formation that will turn this around.

The players look stunned, their faces seem to say, “This is masterful…nay, this is genius.” I give them a look which acknowledges their admiration. “No, lads. This is football,” is my reply. “And this is how we’ll win.”

Training will be focused on defending in the run up to the City game, but again there are several complaints that the workload is too low. I figure now it’s a battle of having an unhappy squad or an injured squad. I prefer the former.

At the Etihad, Nicolas Otamendi scores a header from a corner. Joao Cancelo scores their second. Sergio Aguero gets a third. It’s half-time and we haven’t even had a shot. At 60 minutes, still no shot – perhaps some sort of record? (Opta, it would be fascinating to know).

Aguero makes it 4-0 from the spot. We shoot twice, which reminds me that I do have professional footballers on the pitch playing for me. Raheem Sterling heads in a fifth and we leave the field broken. 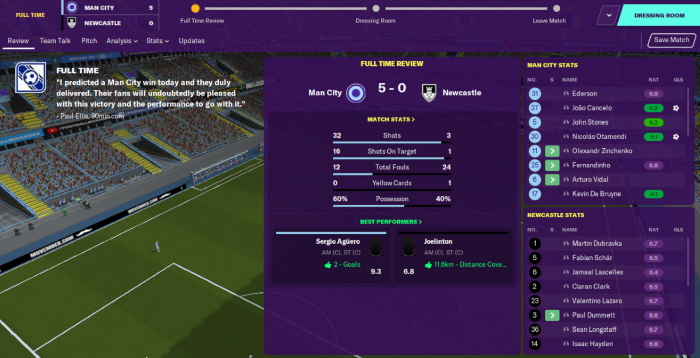 Steve Agnew says that we should tell the players that we appreciate how they played. I feel like ramming his head through his clipboard so it sits like a vintage Edwardian collar. I tell the players I expect more, that watching that performance was like having needles slowly inserted in my pupils. They react positively.

The League Cup and Tottenham away. Same formation for our 19th-placed team: Route One, and practically our first team out on the pitch. Trouble is, Spurs have the same idea. All their best players feature, something I was really hoping against.

We miss two clear chances before half-time, but in the second half, Joelinton scores after Almirion crosses from his new central midfield position. My plan works brilliantly! I send the troops out to attack. Fans can criticise a few things about me, but the one thing they can’t say is that I try and grind out draws; I’m always going for the win – a bit like Kevin Keegan in that regard.

The players press. Then I push them higher. Come on you shit-heels, get the second so we can sit back.

At 6-6, Tanguy Ndombele’s effort is saved by Martin Dubravka!

It’s now ours to win, but Javier Manquillo steps forward. “Jesus Christ,” I say under my breath. But the little Spaniard buries it! We’re through! And you know what? That’s the best we’ve played all season.

We finally have a foundation, something to build upon and grow. Forget the City game; they were always going to beat us with their abundance of talent and decent manager.

I receive news that I now have an embargo on transfers because Mike Ashley is talking with a consortium to take over the club. Same for us as before on the transfer front pretty much, then. 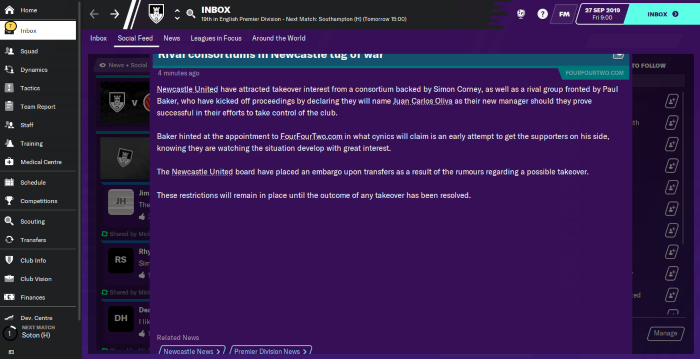 Meanwhile. in fairly suspicious timings considering the news of the saga, the wantaway Yedlin says that he doesn’t want to move anymore. We need him more than ever if we are to deploy the newly-found and highly-successful 5-3-2 formation, so I can’t afford to assert myself on this one.

Are things going….well? I think they might be – finally a bit of a turning point perhaps. Oh wait. We draw Liverpool in the League Cup, which means that avenue of possible success is now basically over with.

Next is Southampton at home. Such an important game; nothing other than a win is acceptable. 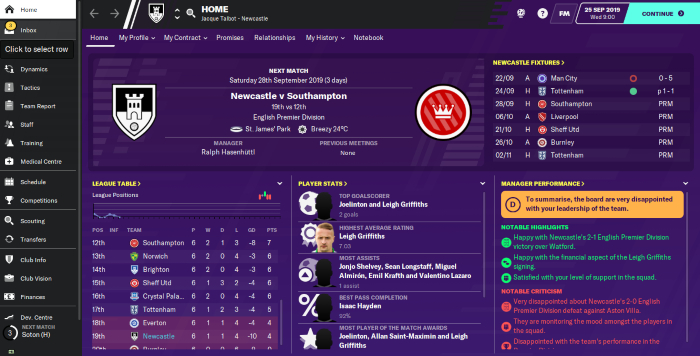 We get off to a slow start and then click into gear halfway through the first half.

We are, in fact, relentless. It’s brilliant – shot after shot after shot, we hammer them. In fact, we play really well in this must-win game, all the way up to the final whistle, which confirms that we draw 0-0.

I try to bollock the players in the dressing room after the game, but I’m unable to get the words out as a bit of sick comes up in my throat through pure frustration and fear.

Having decided not to go for the jugular after the game, the players decide to take a shot at me instead with what appears like a mutiny. They complain about my management and how things are going. I attempt to point to our bad luck with injuries but think the better of it and just tell the players to put their trust in me and I will turn things around.

I’m maddened. I have done nothing wrong; I react when things go south and I am working with a shoe-string budget with a series of venomous backstabbers on and off the pitch. Why am I to blame?

We have first-placed Liverpool to tend with next. In classic fashion, our top striker Joelinton will be out through injury for two weeks, the half-intensity approach apparently too strenuous for him.

Leigh Griffiths and Saint-Maximin lead the line, while the trio of Sean Longstaff, Shelvey and Isaac Hayden remain in midfield.

I really could do without a trip to Anfield. My mind races: will be sacked? Why does no player respect me or listen to me? Why does my what-should-be-fool-proof tactical approach not work? It’s the injuries, it must be.

Joel Matip scores with Liverpool’s 20th shot of the game before half-time. Trent Alexander-Arnold gets a second. James Milner misses a penalty but then, out of nowhere, Saint-Maximin goes on a winding solo run and scores. Holy shit!

“Come on, guys! Turn it up; run at the defence – let’s go for the win. Are we Newcastle United or Nocastle United, eh fellas?”

Liverpool have a free-kick from right. It hits the first man, expertly charged down by Longstaff. With the ball at his feet, he drives forward, then Griffiths – in what has become his trademark move on the pitch – walks into him. The collision sees the ball picked up by Roberto Firmino who, with just the keeper in his way, puts it wide.

I think this basically sums up our luck in the league. Oh no, wait – Liverpool reach an unprecedented shot total, reaching the forties. Now, this is probably what sums up our season. 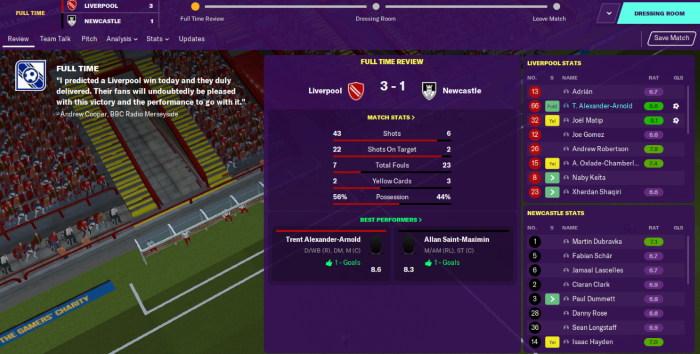 Agnew says we should let the players know we appreciate how they’ve played. I break down.

I dare say I will be sacked soon. If we don’t get a win in the next game, that’s probably it for me. I’m all out of positivity and open to suggestions.

FM2020 series part three: Houston, we have lift-off – and lots of problems