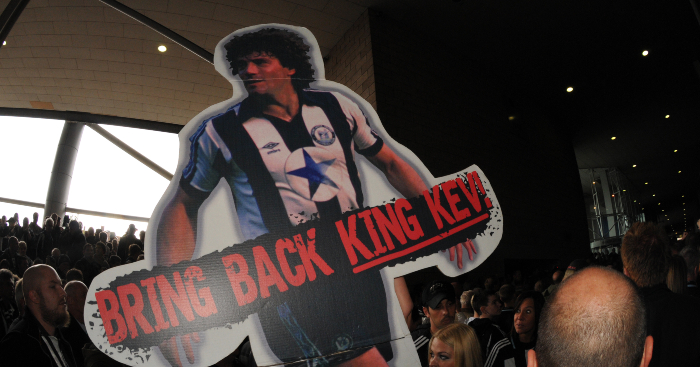 I have been reading Sun Tzu’s The Art of War. It’s been an inspiring read by a Chinese general and military strategist. It provides a detailed guide about how to defeat your enemy. Despite it being written thousands of years ago, the advice is still relevant today.

Indeed, I was enjoying the book and even started to take on board some of the passages. But, about halfway through the book, it dawned on me that the author Mr Tzu had, at least, men who were willing to die for his cause.

What do I have? I have a group of footballers who, when they’re not complaining about every move I make, are deliberately trying to injure themselves to get out of playing for me.

There are still games to go, however. And I am somehow not sacked. Yet. That’s one positive to take. Also, news of a takeover continues to rumble on.

OK, so the players have started mutinies. But that’s not all of them. OK, so the board have only given me enough to sign a second-rate Scottish Premiership striker who’s turned out to be a knobhead. But they couldn’t foresee that. OK, so every move I have made has been met with criticism from the fans despite me literally attempting every tactic in the book. But they aren’t to know that, if anything, the strategies I chose are probably before my time.

Here, at home against plucky Brighton, lies a good opportunity to put our foot on the gas. Them 14th, us bottom.

We go for Rafa’s suggested Christmas Tree – 4-3-2-1 – out of blind hope and a little bit of stubbornness.

Allan Saint-Maximin misses a chance a normal attacker paid a fraction of his salary would have buried nine times out 10. Then Joelinton copies his team-mate, heading over the top after a cross from Sean Longstaff.

It ends 0-0 and I dare say we did play the better of the two sides – but I’m sure fans do not care about promising performances anymore; only cold, hard points.

Now away to Palace. They are 18th, and as a result, Roy Hodgson is equally as vilified in the media and by supporters. I am glad I will be sharing the spoils of being the most hated man in the stadium with someone else.

I do concede my tactics have been too flamboyant, that simplicity has been missing in my approach in the last 10 or so games. At the start of the season, we did actually win games (two). So I change it up – bringing in some of that ‘simplicity’ so nothing completely awful happens; a 4-4-1-1: Miguel Almiron in central midfield and Saint-Maximin just behind the striker.

A lot of our wing-backs can play further up with good attacking attributes, while they have some defensive prowess, too. In theory, then, we should be conceding fewer goals.

Wilfried Zaha scores a wonderful goal early on and I fear that we will be taken for a mauling. But the game soon turns dour and the two relegation-battling clubs start to show the reason they are there in the first place.

In the second half, Sean Longstaff’s quite brilliant 25-yard pot-shot makes it 1-1…a point wouldn’t be bad, here.

A moment of endorphin-induced positivity courses through me as I envision a possible win. I ask the players to start being more direct, hoping that will put the squeeze on the Palace midfield, who so far have been mistake-prone.

Ah – that’s more like it: Luka Milivojevic takes this game as the chance to actually try to score without the ball being placed onto the penalty spot (sorry not sorry, Palace fans). He gets two from open play, in fact. Bravo, I suppose. 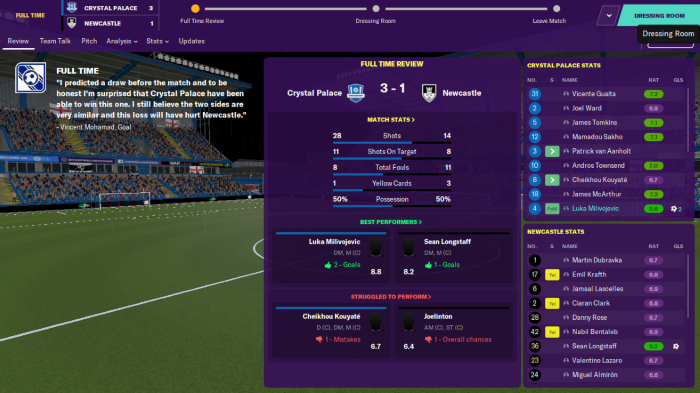 And there it is. The owner has failed. The players have failed. New assistant manager Mike Petke has failed, too. Me? I have adapted, changed up everything, not just floated through hoping for the best. Nothing has worked.

I figure that I will probably have to win my next three to stand a chance of keeping my job. There is no way any sane owner would keep me on otherwise. We are now in December and are seven points from safety.

To add further fury, I come back to the news Nabil Bentaleb is out injured for up to 11 days and Danny Rose for up to six weeks. Classic.

Meanwhile, Andy Carroll is angered he’s not getting enough game time. My issue is that he does what Joelinton does, only much worse. He also is so injury prone, I want to play him purely when the Brazilian is fatigued. He will remain on the bench for now.

We are now onto six-straight defeats in the league. But while the results are terrible, what has shocked me is that the normally apathetic Newcastle United board are extremely disappointed at the lack of attacking football we’ve produced. Christ, we must be dreadful that even the untuned-football eye of Lee Charnley can recognise just how ugly we’ve been.

Manchester United next, and I dare say we’ll get nothing.

With the 4-4-1, we do actually almost get a draw, if it wasn’t for that pesky Odion Ighalo capitalising on Jamaal Lascelles’ error. 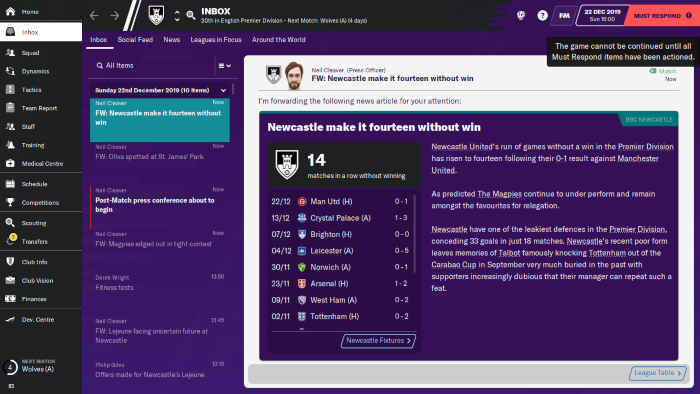 We lose 1-0 and, to be quite honest, I am through with being a manager. I am actually so sick of this shit.

I have had nothing but bad luck thrown my way and awful players who can’t string a pass together. I walk around my office, pacing. Some moments pass and it occurs to me; I have some sort of empathy – and no it’s not a tactical change, not a tweak to the system, those days are long gone – my thoughts are clear now, completely crystal.

It be could well be that, perhaps, I am just not a very good football manager, that I am only bringing the club down?

Before the game, I get a message saying that the club is under new ownership and now my future at the club is under review and I should expect an announcement soon. I expect I have to go on a win of five games to save myself but really, I don’t think I am the man for this role.

Wolves beat us 3-0 in the Midlands. But I still don’t hear a word from the fresh board. 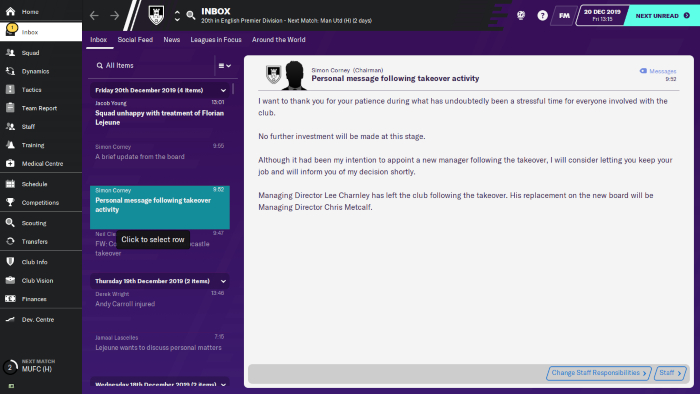 We go to Burnley, who are 19th. Almiron scores a screamer and we look good for the win. Of course, they equalise through Ashely Barnes in the second half. That’s it, me done. But if I had to truly be honest with myself, I am quite glad.

I hear a knock at the door. I go to open it – but then a letter just darts underneath.

I read it, then screw it up and throw it towards the bin. It misses but my decision is made. There is point in time where you just have to be the bigger man and realise you’re not up to the task and abort mission, for the good of the club if anything else. Otherwise, you will be stuck with it for like 13 years, making stupid, ill-informed and baseless decisions which will ultimately lead to a once-proud club falling apart at the seams…

I leave my office and walk out of St James’ Park, under the archway of the nearby Chinatown. 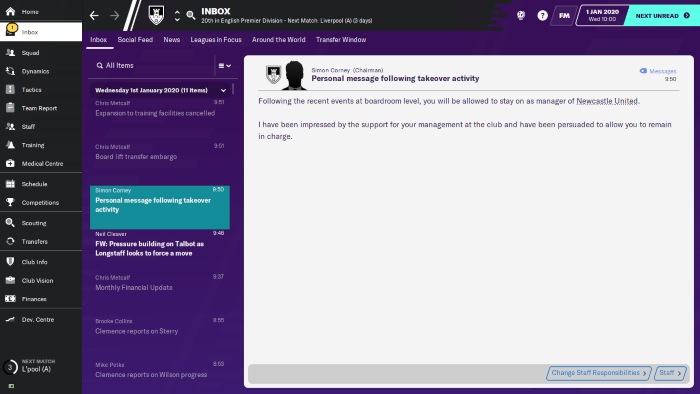 The sunset rises, birds swarm and sing the most beautiful of songs. I swing my coat over my shoulder as a single tear starts to trickle down my eye. “It’s over,” I say to myself. “It’s over.”