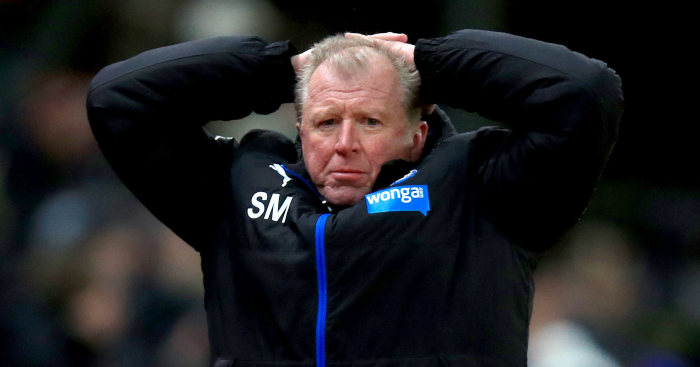 He may only be replacing Steve Bruce, but Jacque Talbot is already wising up to the challenges of managing Newcastle United under Mike Ashley. In part one of our new Football Manager series, a couple of stumbling blocks became apparent in pre-season, but now we’re ready for the big kick off.

I think I can be relatively encouraged by our pre-season results. The only worry is that the squad has not been upgraded tremendously, just extra insurance added up front in the form of Leigh Griffiths.

We have long-term injuries coming out of our ears. I figure we need a replacement for Nabil Bentaleb, who’s crocked for the next three months with a broken foot; defensive midfield is such an important position if the side is to stand any chance of finishing top 10 (or even staying up.)

Well, this is what I am going to put to Mike Ashley. That’s right – I decide to head straight into that porky owner’s office and convince him that I will deliver the world if he grants us another £10million just to get a decent holding midfielder in Bentaleb’s place.

I use my shirt sleeve to avoid the McDonald’s grease on the door handle. Chicken bones litter the floor, the smell of mid-priced Calvin Klein and Just Eat wrapper residue tingles my nostrils.

We need more money, I tell him, the injuries we have had pre-season have been unprecedented. He leans back on his chair and gives a straightforward: “Request denied.” I leave disappointed but not surprised.

To rub salt in the wounds, the transfer window closes as I see Nemanja Matic joining Marseille for £9.5million. That big b*stard could have been here, orchestrating the midfield, and for that money, a Premier League winner, it would’ve been a steal. 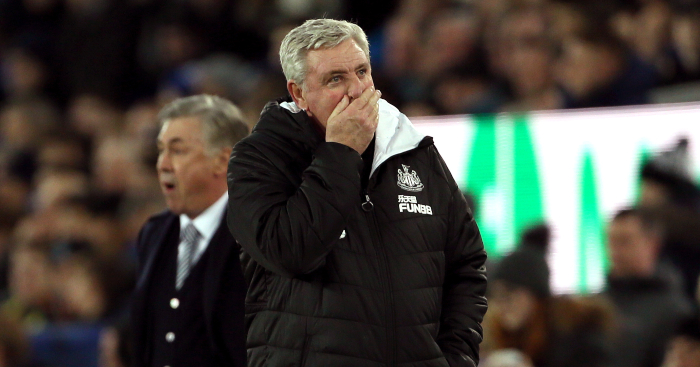 Yannick Toure, our 18-year-old golden boy in the reserves, has seen the light, angling for a move to Arsenal, saying he wants a transfer to a bigger club, and presumably one that’s actually run at a professional level.

I don’t blame him, but if good football management is about anything it’s about sharply dismantling young prodigies’ pipedreams. I persuade Toure to go to Grasshoppers on loan instead, promising him that he’s a huge part of my future plans. He goes willingly.

An offer comes in and Jack Colback leaves the club, signing for Cardiff for £1.2million. Meanwhile, Yoshinori Muto agrees to join Frankfurt for £2.4million. Neither are in the 25-man Premier League squad so I’m not too bothered.

Our first game of the season is against an Everton side who have come off the back of a 6-0 pre-season win against Olympiakos.

We opt for the 4-5-1, the Big Sam protocol – hook to the flanks and supply the targetman.

However, against this legless Everton defence, I start the quite-pacy Griffiths up-front instead of Joelinton, who is still getting up to speed.

Shelvey is wonderful throughout and has two consecutive free-kicks top-corner bound, but Jordan Pickford, the Sunderland-born keeper who’s no doubt playing at 110% against us, brilliantly thwarts him on both occasions.

Ten minutes from time, Morgan Schneiderlin is put through. He puts it away following some sickening defending from us but, after a review, computer (VAR) says no. Phew.

But I barely have time to get my heartbeat back to a normal rhythm when Shelvey trips Theo Walcott inside the box. VAR check. And it’s a penalty. Brilliant.

Richarlison buries it in the 86th minute. I want to cry, but instead I bravely pull myself together and go Route Three, the all-out get-a-f*cking-goal-at-all-costs.

But no. It’s my managerial debut and it’s a defeat. 1-0 – all in front of the fans too. Even Steve McClaren got a draw in his first Newcastle game. 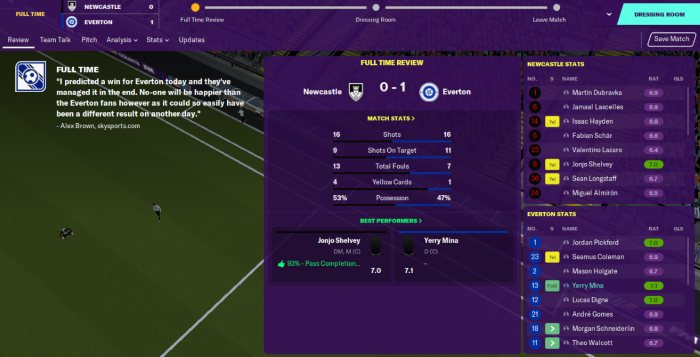 But hey, Everton are a better side than us and it wasn’t as though we were outplayed. Even Carlo Ancellotti kindly concedes that we were unlucky to lose. I really hope our supporters pick up on that.

But I do feel a proper assessment is in order. I identify that one of our greatest strengths is our physicality.

I see the side as a bit of Leeds United of the early noughties. OK, we don’t have their talent particularly, but the players can be inspired by those nasty b*stards. Lee Bowyer worked out so well at Newcastle, after all.

I put a framed picture of David O’Leary on the wall and tell the players to have this man on your mind at all times on the pitch, telling my players to get stuck in at every opportunity. This should drive the fear into opponents.

Chelsea next, and I drop Valentino Lazaro for Miguel Almiron and replace Griffiths for Joelinton.

I know Chelsea are a better side but think a Route Three with our 3-4-3 could really overwhelm them.

Tammy Abraham, heads home after Jamaal Lascelles heads against his own crossbar; a goal which will surely be GIF-ed into oblivion, They have 15 shots. Fifteen! It’s not even half-time yet. I panic and change the system. I go for Route Two, 4-2-3-1, with Griffiths just behind.

Maybe our little Scot can conjure something…anything. In the second half, he does well to get the ball just behind the midfielder…he has Allan Saint-Maximin to his right and Shelvey behind. But for some odd reason, he decides to turn back on himself, towards the opposition goal.

Mason Mount is then able to rob the ball off him, laying through Abraham, 2-0.

We can’t even get a shot on target, and Abraham completes his hat-trick in stoppage time. I am just glad that’s over with. What a stupid idea attempting to play football with this side was. Lesson learned, but I am fuming. 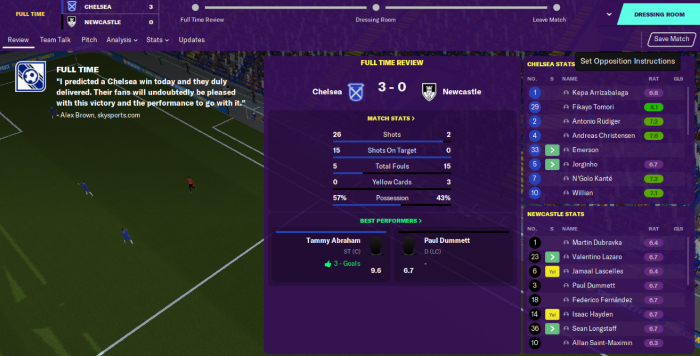 Apparently I have to talk to the players after the game but I don’t even want to look at them. They don’t’ care. They get their money at the end of the week regardless. Me? I have a reputation to uphold. I tell the press I am embarrassed by them – and yes, you’re right, I wasn’t man enough to say it to their faces.

It’s a terrible start to the season but it’s easily salvageable. We have three easy games coming up: Bournemouth, Rotherham in the League Cup, and Watford. We need to win all three, then I can relax.

The one good thing about Ashley is that he’s so apathetic to the club, even if you put in some bad results he doesn’t care as long as we stay up. It’s going to be a long season.