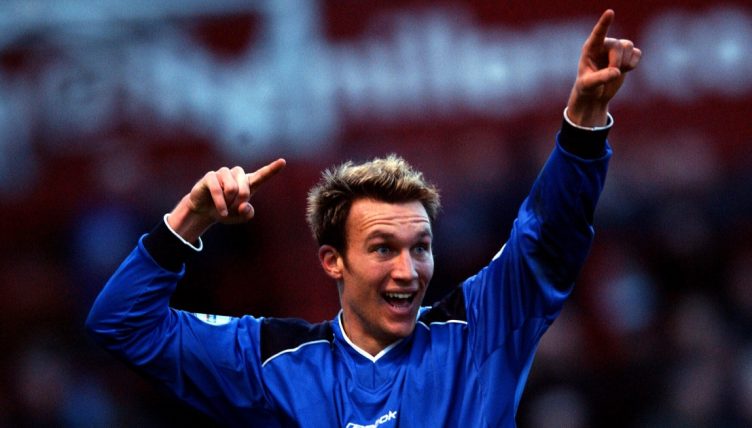 It can be easy to forget that many footballers were fans before they were players – but just like the rest of us, Dean Ashton can still remember his childhood memories watching his heroes on TV.

We asked Ashton about some of his ‘football firsts’, including that rite of passage for every young football fan: his first major disappointment watching England.

The one-time England striker also told us about his early years as a player, leading up to his first-team breakthrough at Crewe aged 16 and then big moves to Norwich City and West Ham before injuries sadly struck.

“My mum, dad and brother weren’t into football so I never supported a club, which a lot of people find strange. I just loved watching it on telly.

“I do struggle at times to get the fans’ mentality of how it can completely shatter your world when your team loses in the last minute.”

“The first game I ever went to watch, I think I was probably 13, that was Bury Reserves against Manchester United Reserves. Paul Scholes was playing, that’s the only thing from the game I remember.”

“Obviously Gascoigne was in that World Cup, but what struck me was Lineker. The goals, that’s what drew me.”

“Cantona with the kung-fu kick was the first thing I really remember. He always had that edge to him and it seemed like all the other supporters hated him, but he had that real arrogance that he just didn’t care.

“So he’s probably the one, and maybe Vinnie Jones because at the age that I was he was more widely seen as a bad boy.”

“When you’re seven years old you don’t know what nerves are and why you’re watching a game of football. But you feel nervous watching it. I was upset after (the World Cup semi-final) because I was like, ‘it’s over’. Stuart Pearce was crying, Gazza was crying, that was the first time I thought, ‘crikey’.

“But I think that’s why I loved it because it really engrossed me. I thought, ‘Wow, these are the sort of feelings you get when you’re involved in football.’” 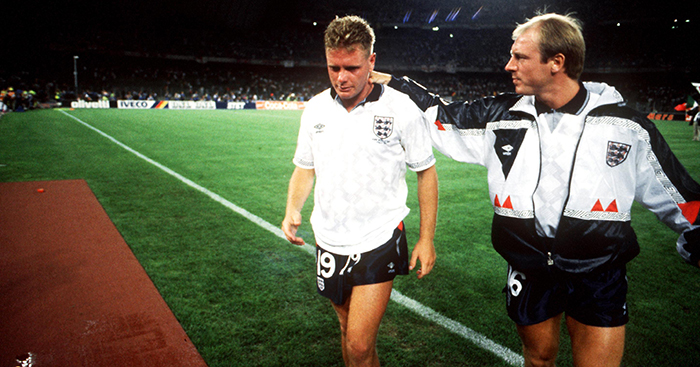 “My uncle and grandad liked Man Utd so it was the blue and black speckled away shirt. That was the first one. But that was bought for me, I didn’t ask for it.

“I had the ones that Lineker had. Quaser. They were so bulky it was ridiculous. You think of what you can wear now! The mud got hold of them, I was slow as it was, but they didn’t help at all!

“I then got into the Predators, but the first ever Predators with the proper…as if it was taken off a Michelin tyre or something like that. And the tongue and all that. I loved the Predators. I pretty much wore Predators for most of my youth career.

“Predators are probably one of the only pair of the boots I have in the house that I kept.

“My nan found them in her loft then sent them to me.”

“Other than school, I think my first actual team was Stone Dominoes. Nick Chadwick played, who went on to play for Everton, and Alex Morris, who is now the Crewe Under-23 coach, was in that same side.

“I vividly remember wearing that red and white blocked shirt. But I played left wing at that point!

“I played for Stone Dominoes, then I played for the county and then I got signed by Crewe.”

“The first game I ever played when I was 16 was away at Gillingham. I remember coming on for the last five minutes and I touched the ball once: they had a long throw and I just nutted it straight back out and into the crowd. That was it, the one touch I had.

“And then I didn’t get back into the team for quite a while.”

“My first goal I remember vividly was against Burnley at home. Mark Rivers slipped me through, I checked I was still onside, went through, smashed it through the keeper’s legs and celebrated to four fans and a dog that were in the stands.

“There wouldn’t be many I’d struggle to remember. If you said, ‘you scored against so and so, what was it like?’, I think I’d remember.”

Ashton was speaking on behalf of EFL On Quest, which brings you all the highlights every Saturday night at 9pm.

Dean Ashton on Stoke interest of 2009: I was in no fit state to move anywhere