Football hasn’t come home, so let’s talk about the *real* football song of 2018 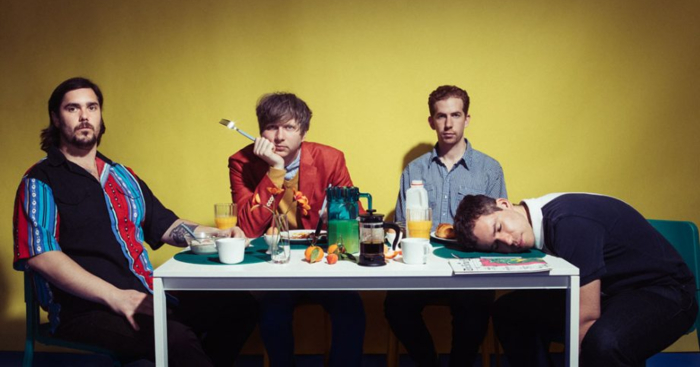 After what fleetingly felt like a reprisal of the Summer of Love, it’s time to accept that football will have to wait a little longer for its homecoming and give Three Lions a rest for at least another couple of years.

As the whole of England swigged from a delirious cocktail of sunstroke and set-pieces, even Atomic Kitten found themselves back in the public consciousness.

Southgate is still the one, and football may yet come home in the future, but sadly it’s now time to face up to the cold, harsh reality: the end of the World Cup, actual work, the renewal of club tribalism – even the sun couldn’t last forever.

Enter Parquet Courts, with the football anthem of the year.

A ramshackle bunch of Brooklynites who are almost certainly having more fun than you, like all great football sides, the four-piece are a gang you really wish you were a member of.

As if they weren’t already irritatingly cool enough, the opening track on their new album ‘Wide Awake’ is inspired by the genius of one Hendrik Johannes Cruijff.

‘Total Football’ is a four minute one second blitz of post-punk gold in homage to the great Ajax and Netherlands teams of the 1970s which exemplified Rinus Michels’ philosophy of absolute freedom of expression.

“We are conductors of sound, heat and energy/And I bet that you thought you had us figured out from the start,” screeches joint-frontman Andrew Savage from the off, as if reading from a romanticised handbook of Michels’ tactics over a painfully groovy earworm of a bassline.

Fellow frontman Austin Brown has a unique relationship with sport, growing up as a fan of the NFL’s Houston Texans, but later ditching the team and American football altogether.

Speaking to The Guardian in 2016, he said: “The more I watched [American] football, and learned how fucked up it was, the less I could responsibly even watch it.”

The professional game left a bitter taste in his mouth, but he found college gridiron just as reprehensible, as a place “where players spend their prime athletic years playing for free, hoping they don’t get injured, so they can get their one deal where they play for five seasons, and hopefully not be so concussed by the time they’re done they can live a functioning life”.

The final line of the song contains a not too subtle nod to his former favourite sport with a straightforward: “And fuck Tom Brady!”

As a result of his disillusionment with his home country’s national game, Brown has embarked on a challenge to support a team in every other sport, unashamedly plumping for Manchester United when it comes to soccer.

“Look, this is the first time I’ve ever followed a team that is meant to win the league every season they play, and I feel awesome about that. The teams I grew up watching have all been shit. So then I was granted the biggest team in the world, and it was, like, great.”

If his choice of team was a little obvious, ‘Total Football’ at least demonstrates an impressive cultural understanding of the game. There is also a pleasing attention to detail in the added perk that the 7” single comes with four Panini stickers of the band members.

The new Parquet Courts single ticks *all* the boxes.

Of course, the song isn’t actually about Michel and Cruyff’s revolution, but rather an uprising of an altogether different kind.

“That is where the ideological springboard for the song comes from, the Total Football theory,” Savage told the NME.

“But it’s more about this kind of new energy that I think is happening in America where young people are starting to have more of an inclination towards collectivism and less of the kind of hyper-masculine super individual cliche that America has emphasised that is rejected in the last line of the song, ‘Fuck Tom Brady’, you know.

“It’s about people’s desire to be together and stand for something ideologically.”

And it is with this central theme where ‘Total Football’ trumps ‘Three Lions’ as – at the risk of sounding like Limmy – the real sound of the summer.

Undoubtedly brilliant, Broudie, Baddiel and Skinner nostalgically lamented past glories. Parquet Courts, on the other hand, give us a contemporary call to action to make things happen in the here and now.

Fast, raucous and, most importantly, danceable, ‘Total Football’ sounds like the best night you never had, played by the greatest football team that never was.

Savage also acknowledged to The Independent that “what a song is about to its author is not what it has to be about to the listener”, meaning this is a rare occasion when we can have it both ways; a stomping indie-rock belter which celebrates a tactical masterplan and a poignant commentary on American life.

Seriously, what more could you possibly want?