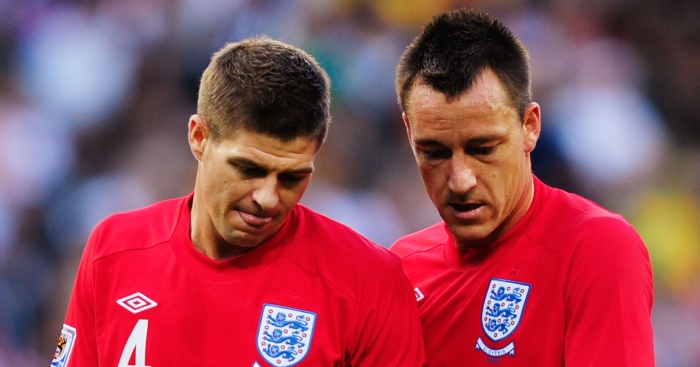 Not many people are expecting England to reach the latter stages of the World Cup in Russia – but how much further could Gareth Southgate’s go with peak John Terry and Steven Gerrard in the team?

In last week’s FM18 sim, we pitted Southgate’s fledglings against the 2006 England squad, the last group of players which reached the quarter-finals of a major tournament.

This time they will join forces, at least to some extent: we’ll pimp up the current side with 2006 Gerrard and Terry, saying goodbye to Loftus-Cheek and Cahill, respectively. Let’s see how far they can go.

Things get off to a good start in the opening game, with Gerrard hitting the post after just three minutes against Tunisia and Harry Kane putting England ahead with a penalty two minutes later.

But, virtual reality or not, this is still England, and right at the end of the first half, Terry messes up a clearance from a cross which leads to an equaliser. He was supposed to make England better, not worse.

Thankfully, Kane takes the game by the scruff of the neck in the second half, scoring an audacious volley before completing his hat-trick with minutes remaining. The 3-1 scoreline is ever so slightly overshadowed by Belgium’s 8-0 win over Panama, but it’s promising nevertheless.

The Central Americans don’t put up a fight against England either: Jesse Lingard scores twice as the Three Lions win 4-0 in the pouring rain, with 71% possession and 31 shots to Panama’s one. 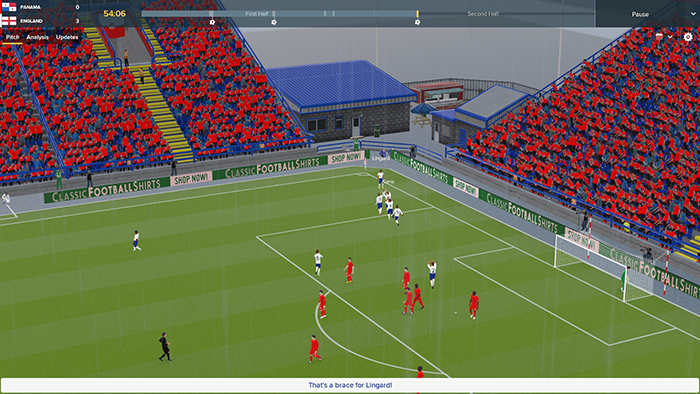 The mouth-watering fixture between the group leaders turns out to be a major disappointment. Quite literally nothing happens in the first half apart from an injury to Jan Vertonghen.

But whatever Southgate says in the dressing room quickly backfires as Danny Rose misjudges Kevin De Bruyne’s through-ball less than ninety seconds after play restarts and Belgium take the lead.

John Stones casually passes the ball into his own net under no pressure only a few moments later, and though Gerrard and Terry combine from a free-kick 20 minutes later to pull one back, the comeback never looks on. In fact, the Belgians miss another sitter in the 94th minute.

Still, the bare minimum has been accomplished. Colombia await in the round of 16 – and if England can get past them, it’s almost guaranteed to be Germany up next as Brazil surprisingly crash out in the groups. 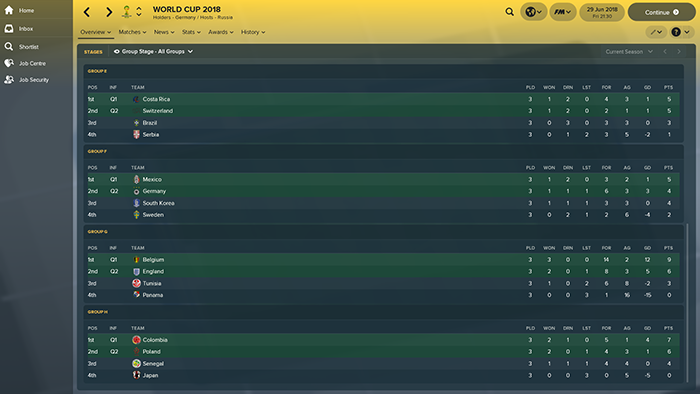 By this time, the England team has a very clearly established identity.

The inclusion of peak Terry and Gerrard forced Southgate to rip up the ball-playing 3-5-2 tactic, opting for a 4-2-1-3 instead with two defensive midfielders behind Gerrard, and Lingard and Raheem Sterling generally serving as Kane’s supporting cast.

The game against Colombia is an instant classic. Perhaps as a reaction to the toothless performance against Belgium, Southgate opts for a more counter-attacking style, ceding most of possession to the South American opponents.

The first chances fall to England, but the real game-changer comes 15 minutes in when David Ospina goes down in tears as he has to be replaced after an unfortunate fall.

Not long after, Dele Alli and Kane combine on the break as England take the lead.

Unfortunately, the second comes only two minutes later as Juan Cuadrado absolutely destroys Danny Rose on the wing and puts in a fantastic cross, which Carlos Bacca easily converts. 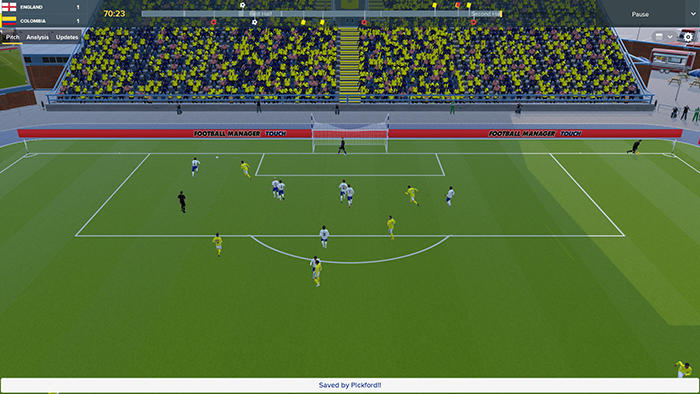 The rest of the half is a real brawl. James Rodríguez picks up a knock and Wilmar Barrios also needs to be replaced just before the interval.

It’s a familiar situation, England are a man down in the knockout stage, clinging onto a draw. Southgate immediately takes off Sterling and brings on Phil Jones.

However, there’s yet more drama as Mateus Uribe becomes the fourth Colombian casualty. He cannot continue and now both teams are down to 10 for different reasons.

Shortly thereafter, Jones gives away an inexcusable penalty. Radamel Falcao steps up… and hits it straight at Jordan Pickford. Game on.

In the 72nd minute, Lingard skips past two on the left. Kane somehow gets his head to the cross despite the close marking to put his team ahead once again. Is it time to tear up the script?

No, Colombia equalise from a free-kick with two minutes to go.

The game goes to extra-time, but there will be no penalties. After an excellent corner, Terry’s toe-poke gives England the advantage the third and final time. The whole of Colombia screams injustice, but into the quarter-finals England go. 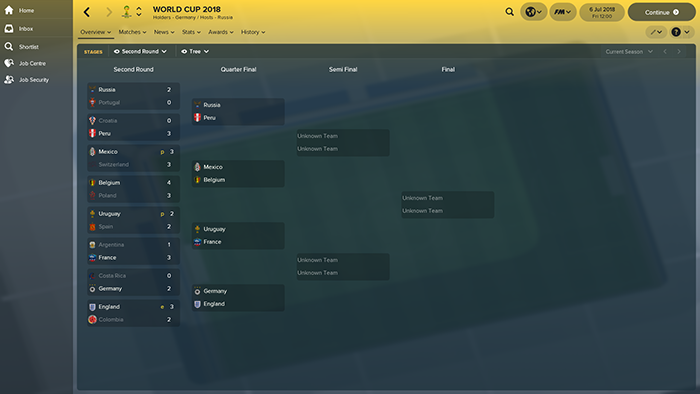 Germany are up next in a World Cup that keeps delivering surprises. Uruguay beat Spain on penalties to set up a match against France as England’s potential semi-final opponent.

The real shocker, though, is the Russia-Peru quarter-final as the hosts take out Portugal in the round of 16 and the South Americans stun Croatia in a 3-0 victory.

With Mexico or Belgium facing the winners in the next round, there’s no question that England are in the tougher side of the draw.

Despite the penalty mistake, Jones gets to replace the suspended Henderson as Southgate tries to replicate his strategy from the last match.

There are barely any highlights of note as a single German shot on target marks the passing of the first half hour. They have 65% of possession but only really go close in the 39th minute when Thomas Müller misses the target.

Gerrard shoots inches wide from the edge of the box, Kane races to a long kick by Pickford only to also miss the target, then he fires a rocket straight at Manuel Neuer after Sterling’s excellent cross.

With 20 minutes to go there’s still no breakthrough, and you can’t help but feel these missed chances may very well come back to haunt them.

The game goes to extra-time. Southgate takes off Kane and Lingard, replacing them with Danny Welbeck and Marcus Rashford – and it pays off as the fresh young strikers completely overwhelm the German defence.

The breakthrough doesn’t come until the 116th minute, but Welbeck’s unforgettable goal from a counter-attack seals the deal: die Mannschaft ist kaputt! 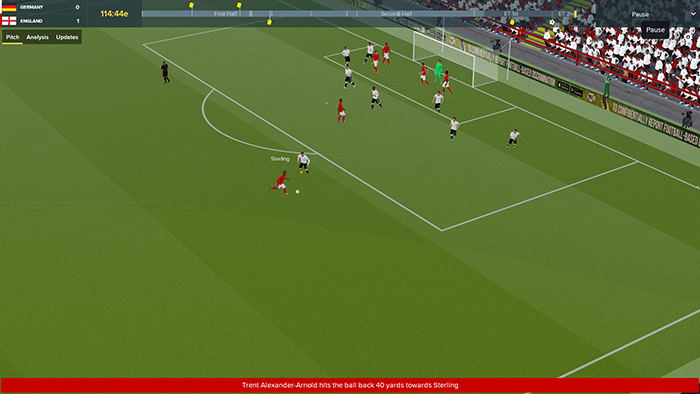 It’s Uruguay up next as they beat France in extra-time.

Henderson is back in the starting XI, and it’s his fantastic through-ball to Lingard that unlocks the Uruguayan defence after only 15 minutes.

Three minutes later, Kyle Walker scores from a free-kick. England are in wonderland. 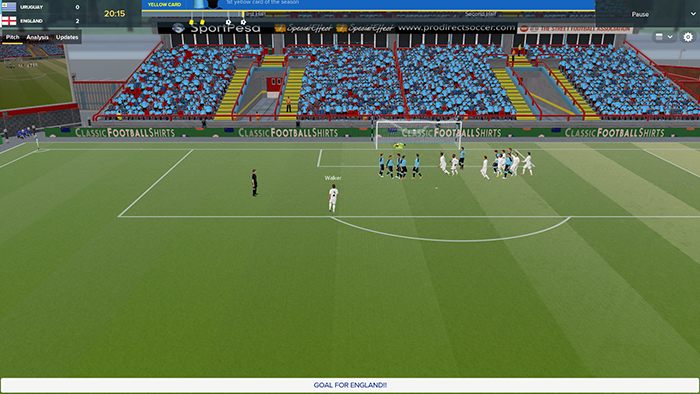 Then, just before the end of the first half, Stones makes it three after a corner.

Again, the South Americans have almost 70% of possession, but they can’t make anything of it. The rest of the match is expertly managed, and it’s a great sign for England that nothing else of note happens as they try to keep themselves in shape for the final.

Their opponents? Russia. Vladimir Putin’s cackles echo through the halls of the Kremlin as they beat Belgium 4-2 in extra-time as part of a run which makes 2002’s refereeing of South Korea’s matches look professional by comparison.

This and their quarter-final win over neutrals’ favourites Peru means the whole world is rooting for England to put an end to this. Belgium take the bronze medal, but all eyes are on the Luzhniki Stadium now. Can Kane and co. stop the madness?

This time, it’s Gerrard in the centre of the pitch, with Henderson and Dier dropping back into the double-DM setup. He and Terry have played every single match. Can they make it happen? 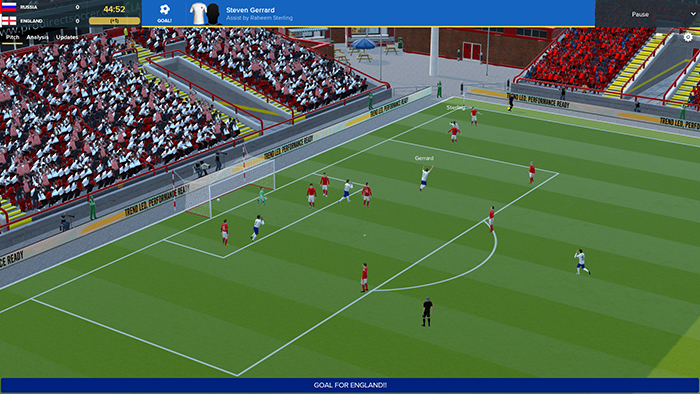 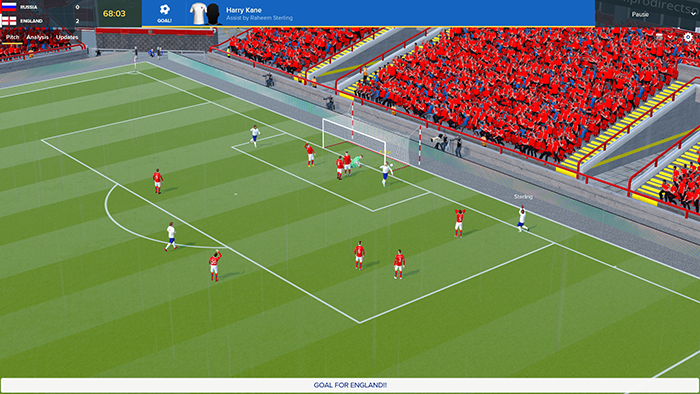 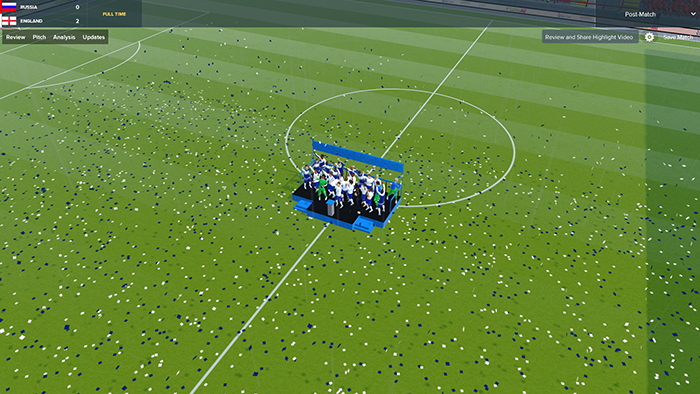